Not to fear, I will also post on my best wines of 2011 soon. But when thinking about 2011, the frame that really captured the best tastes and memories was “experiences”. Yes, the individual dishes and wines involved were wonderful. But what really made these things special was the combination of good food, drink and company–often in a great setting too. With no further ado…

#eatlocalwob These experiences aren’t all in order, but it’s not accident that the “eat local” tag tops the list. This was our first year participating in a Consumer Supported Agriculture (CSA) program, and our community also opened a new farmers market. The CSA was a great way to get more in touch with what crops are being freshly picked locally. It also forced creativity to figure out how to use unfamiliar ingredients (if you’re stumped for a kohlabri recipe, here you go!). The #eatlocalwob references a Twitter hashtag we established to share what we were making with the latest from local forms; or in some cases, to identify unknown vegetables!

Long Island for a wedding (and wine!) I should have expected nothing less when our friends John and Liz got married in November. John is a serious fellow foodie, and he had described great spreads had at other weddings of Liz’s Long Island friends. We were in for quite a treat when we arrived at the gorgeous Bourne Mansion. I could have called it a great meal simply following the wonderful appetizers and carving stations they had during the cocktail hour, but that was only a warm-up for a tremendous three course meal.(the photo is from the cocktail hour food!) The meal started with an impressive Grilled Portabello Mushroom Tower, followed by a salad and then filet mignon. I’d be hard pressed to make such a meal for 6, let alone the 200+ that enjoyed the wedding. The wedding fare alone was enough to have the trip featured here, but we also had a nice, quick stop in Long Island wine country including Shinn Estate Vineyards. I suspect I’ll will talk about them more in the wines of the year post!.

Wine Club @ Pairings Participating in the new wine club at Pairings Wine & Food has been been great fun. The club gathers every couple months to sample some interesting wines along with tasty food. It’s usually around 8 or 10 people to allow for an intimate experience. The first meeting I went to was a blind tasting, where I’m happy to report my tasting partner and I were able to correctly rank the four wines. The most recent meeting sampled wines of Bordeaux, including a special older bottle one of the members brought.


Chatham Bars Inn I really enjoyed the swordfish dish I had at the Inn’s dining room, along with a nice pinot. But what really made this special was that it was part of a wonderful, quick offseason trip to Cape Cod. We caught some amazing 60 degree weather and enjoyed time at the beach. Also enjoyed a good lunch at the Chatham Squire and sampled some interesting oils at Gustare Olive Oils & Vinegar. 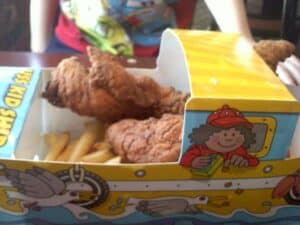 Portsmouth Our Portsmouth trip to celebrate my sister’s 40th birthday also makes it here as an overall fun experience that included some good food. The birthday dinner featured a tasty assortment of pizzas at the Gaslight restaurant. For lunch the next day, we enjoyed lunch with a great view of the harbor at The River House. I enjoyed my tuna salad, and they were able to deliver this chicken and fries in a boat to my son–prepared in a manner safe for his allergies!


He likes it! (mango juice) B. started expanding his culinary horizons a bit this year. No small feat, as he has multiple food allergies combined with a six year old’s palate. But he know likes to go to Indian restaurants, a favorite of Jodi and me. This is a qualified success, as at this point it’s the mango juice and breads that he goes for there. He also now ranks this Skillet Pork & Cabbage dish among his favorites and has suggested we should have salmon every week. Nice diversification from his Ian’s allergy safe chicken nuggets!


Cooking for the Cause I continued to find ways to put my cooking interests to use for the Social Capital Inc. cause in 2012. I cooked up a 3 course meal again for successful bidders on the SCI online auction. I was pleased when I was asked by one of the guests, “Where did you train?” (answer: my kitchen!). I also collaborated with my friends at Pairings to put together some tasty food and wine pairings for a fundraiser in June at the Griffin Museum. The Beef, Faro & Mushroom pairing with a Bordeaux was especially tasty…as was the hockey game that night (Game 7 of the Stanley Cup finals!).

Lots of home cooking! Biggest highlights in this department revolve around the #eatlocal meme mentioned at the outset.

Looking forward to another great year of food in 2012! Would love to hear about any of your 2011 food highlights. And stay tuned for my wines of the year…some time in the next week or so.