Inspired by some of Thomas Jefferson’s favorites, Founder’s Mac and Cheese features cheddar and Parmesan cheese along with some green veggies. My contribution to the Easy to Make Patriotic 4th of July Recipes #SundaySupper. Read on for details, or or click here to jump ahead to the recipe. 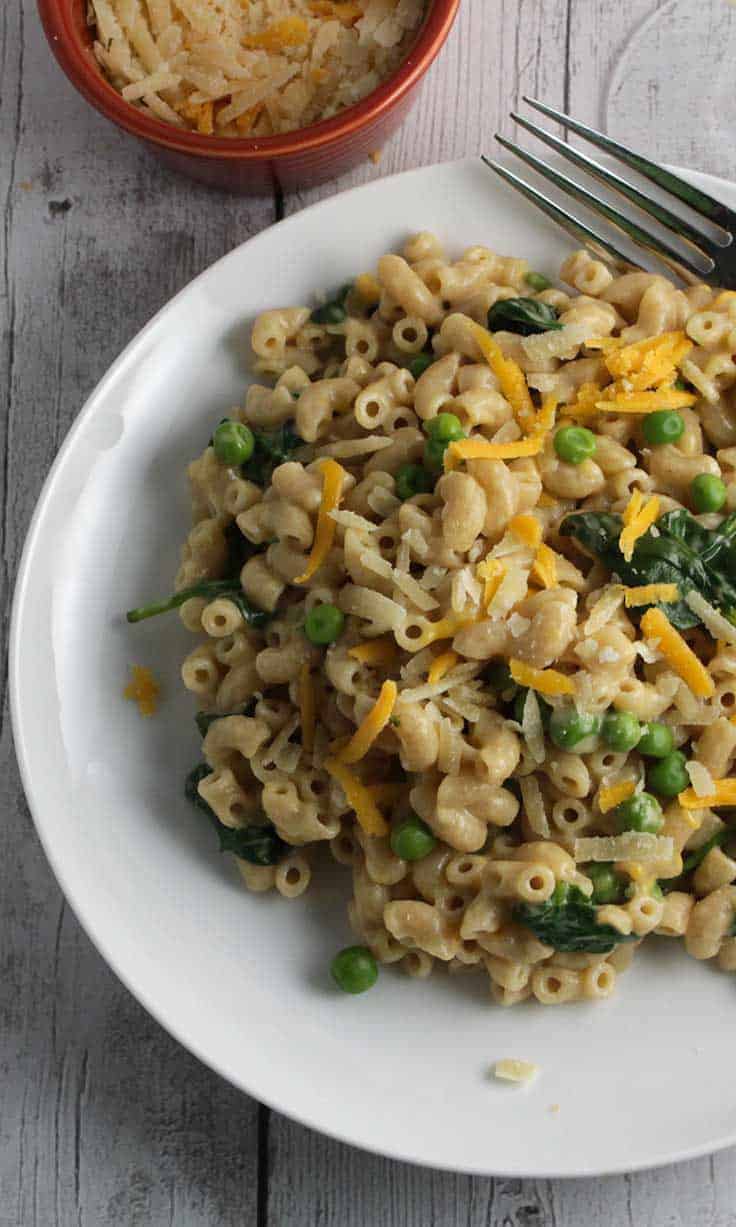 I figured there would be plenty of recipes featuring red, white and blue foods for today’s Sunday Supper Easy July 4th Recipes event. I wanted to go in a different direction. I thought it would be fun to make something inspired by the Declaration of Independence author’s interests in food and agriculture.

I remember visiting Thomas Jefferson’s home, and touring the gardens. He cultivated a wide array of vegetable and herbs that would be featured in dinners at Monticello.

So I took a general idea that Jefferson was interested in food, including fresh vegetables, and did some research to figure out what I’d make. I came across this article about 5 foods Thomas Jefferson introduced or made popular in America.  Macaroni and Cheese and Parmesan cheese were both on the list (along with ice cream, an important contribution!). I had my inspiration to make Founder’s Mac and  Cheese for this #SundaySupper. By the way, thanks to Cindy of Cindy’s Recipes and Writings for hosting this patriotic food Sunday Supper. 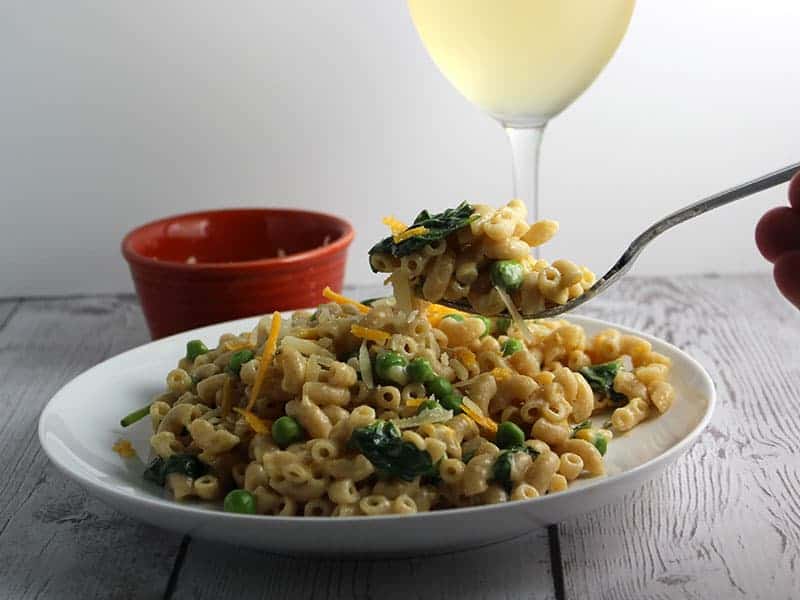 This Founder’s Mac and Cheese needed to be made on the stove top only for this July 4th weekend recipe. So you grate cheddar cheese as the pasta cooks, so that it can be quickly tossed and melted as soon as the cooked pasta gets drained. Oh yes, and pick some good American cheddar to stick with the patriotic theme. Combine that with some good quality Parmesan cheese from Italy, because Thomas Jefferson also wanted to bring some of the great products of European culture to the new world.

Jefferson cultivated greens popular in Virginia and served them frequently. I was keeping things simple and used spinach to add some healthy greens here, but you could definitely choose collard greens or some other green of your choosing. To make the recipe super easy, place baby spinach greens in the colander just before using it to drain the pasta. The heat from the boiled water passing through is enough to wilt the spinach, then you can toss the wilted spinach with the cheese and pasta. 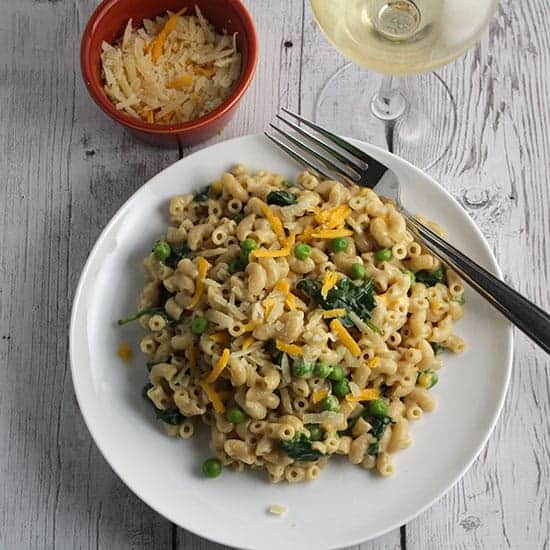 Peas were also a favorite of Thomas Jefferson, another sign of his good taste in my opinion. So I added some peas as the other veggie in this Founder’s Mac and Cheese.

I grated some high quality Parmesan cheese to finish the dish. Half was mixed in with the pasta right after cooking, the other half passed at the table for topping.

Jefferson also had a passion for introducing Americans to the fine wines of France and Italy, trying to wean them off the fortified Madeira and port favored by the British off the time. The Monticello website has some interesting comments about wine made by our third president, including “in nothing have the habits of the palate more decisive influence than in our relish of wines.”

Champagne is also on that list I mentioned earlier of things Jefferson introduced to America. Champagne or other sparkling wine would certainly be a good option for this mac and cheese, but we went in another direction. We sampled two wines with this Founder’s Mac and Cheese dish. In a nod to the patriotic theme today, we started with an American Pinot Gris from Oregon, and that worked nicely. We also had a bit of a red Cotes du Rhone opened, and that medium bodied red paired nicely with the cheddar cheese. So you could really go with your own preference with this dish–white, red or dry sparkling wine–and you would have a good pairing. Sounds like Thomas Jefferson would probably have preferred the red from Southern France. 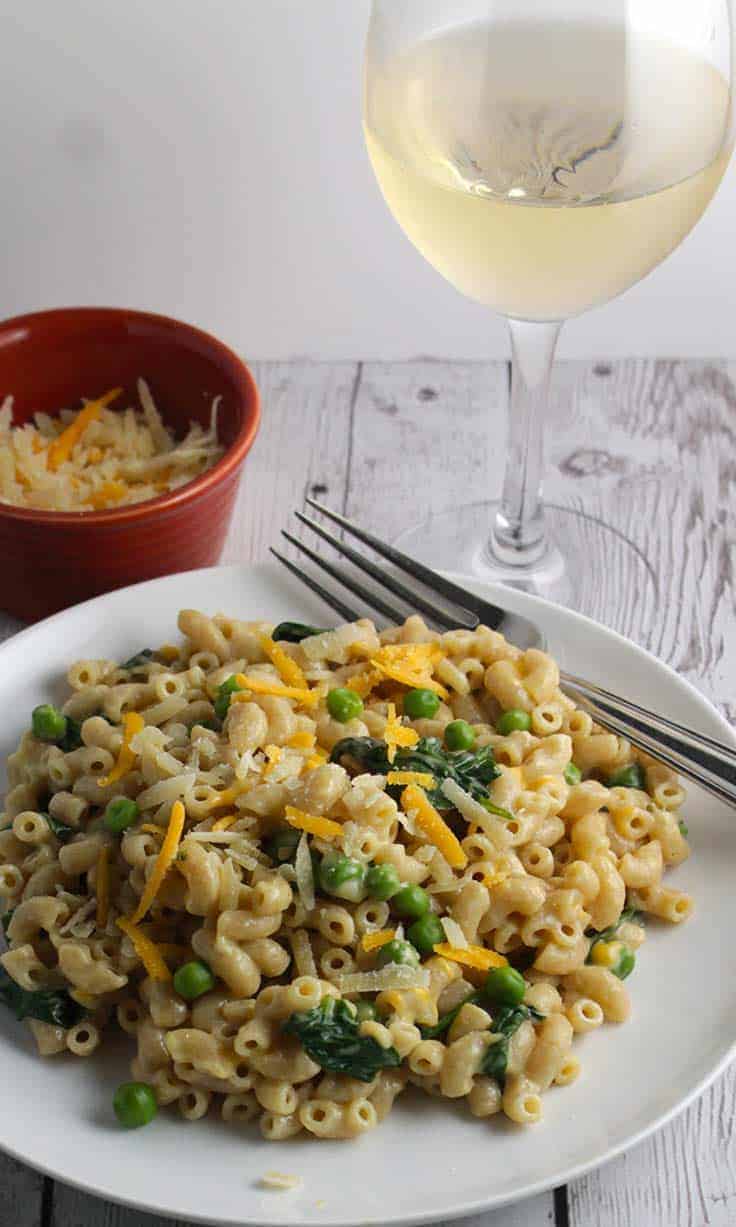 Whatever is in your glass, happy July 4th to you. Cheers!

Inspired by some of Thomas Jefferson’s favorites, Founder’s Mac and Cheese features cheddar and Parmigiano cheese along with some green veggies.

For the Red, White and Blue Salads and Main Dishes

Oh Say Can You See Desserts

Join the #SundaySupper conversation on twitter on Sunday! We tweet throughout the day and share recipes from all over the world. Our weekly chat starts at 7:00 pm ET. Follow the #SundaySupper hashtag and remember to include it in your tweets to join in the chat. To get more great Sunday Supper Recipes, visit our website or check out our Pinterest board.Would you like to join the Sunday Supper Movement? It’s easy. You can sign up by clicking here: Sunday Supper Movement.