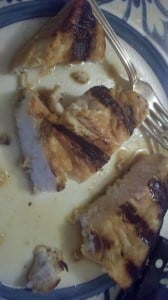 I first posted this recipe after my first attempt at grilling swordfish. Now I go to something along these lines a couple of times a summer, with a few tweaks for my 6 year old with food allergies. He and I were fighting over the last bites the other night! I leave out the hoisin and red pepper flakes, and will substitute dried ginger if I don’t have fresh on hand. I originally paired this with a white wine; but now love to serve it with Pinot Noir. This weekend, as a nice treat, that pinot was the 2009 Etude from the Carneros Appellation. Definitely a wine of the year contender! But I’m sticking to the rest of the story I told when posting this in three years ago…

***Original post
My first attempt at grilled swordfish came out pretty well, I must say. I’d sampled some with an Asian based sauce at Whole Foods and tried to replice something like what I’d had. I liked my version at least as well as theirs. Jodi is not typically a big fish eater, but she liked it too. I actually used this marinade for some chicken as well, and it works nicely there too. Here’s the recipe for quick, tasty meal:
1/3 cup soy sauce
1/4 cup hoisin sauce
3 cloves garlic
1 inch ginger, peeled and coarsely chopped
1 tsp brown rice vineger
1/4 cup white wine
1/2 tsp red pepper flakes
8-12 ozs. swordfish steak
Preheat a grill to medium-high. Puree all the ingredients, expect the swordfish, in a food processor. Pour enough marinade over the fish in a plastic bowl or in a plastic bag. Reserve the extra marinade you don’t put on the fish for topping at the table. Cover and shake to distribute the marinade thoroughly. Marinade for up to 2 hours, at least 30 minutes. 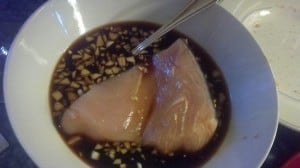 When ready to cook, remove the swordfish from the marinade, shake gently to remove excess marinade. Discard marinade. Grill the fish about 5 minutes per side, so that it is just cooked through and flaking. Serve at table with extra sauce, if desired, and a squirt of lemon or lime.

I served this with couscous and a spinich salad. I tossed a bit of the extra marinade into my vinaigrette to give it a hint of the Asian flavor.
Wine pairing: Having not had much swordfish, I sought advice on what to pair with the dish. Suggestions included viogner, gewurstraminer, riesling, chardonnay, pinot noir. A lot of options. I sampled the 2007 Foris Pinot Blanc ($14) from Oregon’s Rogue Valley, and felt the lively ripe fruitness and medium body would match the substantial flavors of the swordfish, and it did so nicely.
« Wine Pairings for Indian Food, Revisited
My Nine Julia Moments »