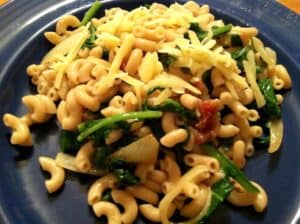 The greens keep rolling in through our CSA, pushing me to come up with more ways to prepare them. There was quite the discussion on the Cooking Chat Facebook Page trying to help me identify one bunch of mystery greens. I think in the end Vinnie may have been right, that I had a bunch of larger than usual arugula on hand, because it did have the peppery flavor profile–but a bit different than what I’m used to. Perhaps a different variety? What I know for sure is that, in addition to the mystery greens, I had a bunch of white salad turnip greens–I cut the greens off the turnip myself. Greens make a nice side dish, but with two bunches I thought I could feature them an entree. A few people on Facebook reminded me of how bacon flavors greens nicely. I also had some cheddar on hand, so I was ready to go! One tip on the greens–you could try this with many different greens, but focus on ones that can just be sauteed as opposed to require boiling or braising, such as kale.

Heat a large skillet to medium high, and cook the bacon until good and crispy. Set the bacon aside to cool on a paper towel, and drain the excess bacon fat. Wipe out the pan a bit, but leave a bit of the bacon “juice” in the pan for flavor. When the bacon is cool, chop or crumble it into small pieces. 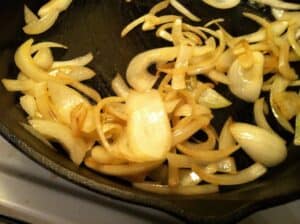 Lower heat to medium under the same skillet you used for the bacon. Add a tbsp of olive oil, then add the onions and saute. Meanwhile start cooking the pasta according to package  instructions. After the onion is nicely softened, add the garlic. After about one minute, gradually add the greens to the pan along with a bit more olive oil if it seems to need moisture. You often need to let a batch start cooking down a bit before adding the next bunch. The greens take about 5 minutes to cook down. You want them all wilted, but not overcooked, to retain flavor and nutritional value. 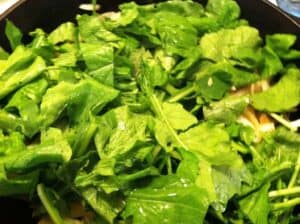 Drain the pasta, toss with the greens and bacon, then stir in about 3/4 cup of the cheese. Serve with the remaining cheese at the table. A medium to full bodied white wine might be the most obvious choice…but I made this on International Grenache Day, so we enjoyed it with a nice Spanish Garnacha–the 2010 Legado Munoz Garnacha, a great value around $10. Good depth of flavor for the price, blackberry fruit and some white pepper. 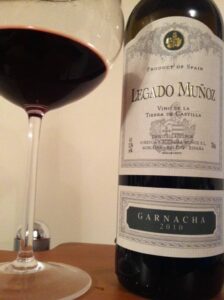