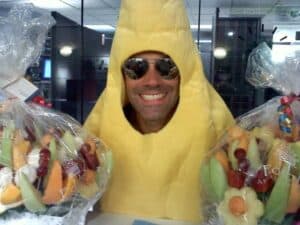 I’d heard some good buzz about Mass. Innovation Night’s (MIN). When I met MIN founder Bobbie Carlton at last week’s Tweetup Woburn event, she told me this week’s MIN29 was the foodie edition. The calendar was open, so Jodi and I eagerly jumped at the chance to check it out. Social networking with foodies, what’s not to like about that?!?

The MIN events really get started in the weeks leading up to the event night. We had a chance to review information on 10 or so innovative local food products, and vote for the ones we’d like to hear give a pitch about their product. We were all winners, though, because those that weren’t top vote getters still had a table at the event, allowing us guests to sample there items and chat with the entrepreneurs.

Others have already done thorough coverage of the night, so I’m going to focus on a few of the products and people that popped out for me:

Zing & Other Smiling Sauces: Though I tend to make sauces myself, it’s nice to have something on hand for a nice flavor boost when I don’t have time for making my own. The Smiling Sauce entrepreneurs promised in their pitch that their sauce Zing was aptly named…and they weren’t kidding. I was pretty hungry after the presentation and grabbed a bigger bite than I should have! When I recovered, I sampled the other sauces in their line, and was impressed with the freshness and flavor of each one. I’m recommending to my friends at Pairings Wine and Food that they bring some Zing into their shop!

Foodies of New England is a new magazine covering the regional food scene. I’ve only had a chance to peruse it so far, but it looks great! If you’ve been following me here or on Twitter, you know I’ve been very focused on eating locally of late, so this new publication is up my alley. They are going to focus primarily on New England spots outside Boston, given that the city’s scene already gets quite a bit of coverage. Thinking of great meals I’ve had over the last year or so in Portsmouth, Portland, Ogunquit and the Cape, I can see the merits of their approach.

Evocatus: This is a new website designed to facilitate people sharing their tastes and finding interesting combos. I encourage you to check it out for yourself; they can certainly explain the concept better than I can. I’ve just started to dabble on the site. They piqued my interest with a good presentation that included the example “suppose you like Chianti with fish”, which definitely qualifies as an unorthodox pairing!

Edible Arrangements Tropical Line This was one company I already knew; in fact, we had an Edible Arrangements fruit display sent to us as a baby congrats gift! A very tasty and healthy alternative to flowers. At MIN29, I had a tasty chocolate covered strawberry from Edible Arrangements. They also offered the most creative photo opp of the night–banana man posing with their arrangements–which I used for this post. Better yet, those of us lucky enough to have attended the event get to stop by an Edible Arrangements store for a sample of their new line.

The interesting group of people assembled for the event was as important to the fun as the products. Of course, there were many foodies in the crowd. I had a chance to learn about the Boston Food Bloggers site from someone I met on the way out, and met several Twitter friends in person for the first time. A fun time, and I’ll sure to be back at MIN when it’s in my hometown (Woburn) in October!

« Portsmouth Allergy Safe Dining with a View
Chatham Squire: Still Tasty After All These Years »