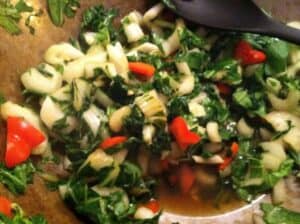 I enjoy bok choy, though I don’t have it all that much. So I was pleased when it appeared in the week’s CSA box. I like the way the whole plant is edible. If you’re not familiar, the leafy green part has a quality similar to other greens. Unlike greens like kale, where the stem is much too tough to eat, the bok choy stem is tender enough to enjoy. Using it all together, you get a nice crunch from the stem to add texture to the dish. So I often add bok choy to a main course stir fry. But this time, I combined it with just a few other ingredients as a separate side. The delicate bok choy absorbs the flavors of the sauce nicely.

Whisk the sauce ingredients in a small bowl and set aside.

Heat the oil in a wok or large, deep skillet to medium high. Stir-fry the bell pepper for 2 to 3 minutes until it begins to soften. Stir in the bok choy in a few batches, letting it start to wilt a bit to create more room in the pan. Stir-fry for about 2 minutes, until the greens have begun to wilt. Reduce heat to low, stir in the sauce, and let cook that way for a minute or so to let the flavors meld. Remove from heat and serve, adding the almonds on top of each serving if desired. 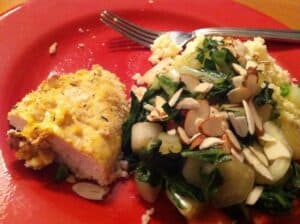 I served this over couscous along with baked parmesan crusted chicken breasts. We had a Spanish white wine called Casamaro, a blend of the local grapes Verdejo and Viura. With grapefruit on the nose and a citrusy crisp taste, it makes for a nice stir-fry pairing.