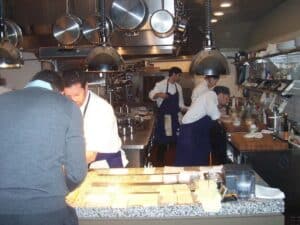 Craigie on Main was abuzz with conversation as we walked into the warmth on a cold November evening. I suspect much of the chatter was about food on this Saturday night 11 days into its new, significantly expanded incarnation in Central Square, Cambridge.

The atmosphere has certainly changed a great deal with cosmopolitan décor, expanded seating, and the addition of a bar and open kitchen. But I’m happy to report that the underlying passion for food made from high quality ingredients has carried over quite well the old intimate Craigie Street spot. The menu changes daily to reflect what is in season—the text notes that the menu is printed about 8 minutes prior to opening to give 2005 Food & Wine Best New Chef Tony Maws as much time as possible to create the evening’s dishes with what was fresh that day. All of the Craigie material and its staff exude great enthusiasm for sourcing the food from local and sustainable producers. And it sounds like Tony is still very hands-on, including doing the butchering work himself. A welcomed throwback in the age of the celebrity, empire-building chef.

The menu made for interesting reading to be sure, but I quickly landed on my choices and was ready to see if the food matched the rhetoric and my past Craigie Street meals. I started with Lamb Rillettes served with a prune compote and marinated king oyster mushrooms.

For the un-initiated, rillettes are a meat preparation similar to a pate, with the chopped meat cooked slowly in fat. My lamb rillettes arrived with dramatic flair. First the toasts came on which the rillettes gets spread and then the plate with the compote and mushrooms. Next a server scurried out with a hot baking dish that had the rillettes. She carefully cutting my piece and plated it along with the compote as the neighboring table joined us in watching with anticipation.
The wait was worth it, as I began to savor the rich, savory taste of the meat, matched by the earthiness of the mushrooms and contrasted by the sweetness of the compote. I chose a bottle of the 2002 Bandol for the meal, and this robust earthy wine paired well with both the rillettes and the main course. Bandols come from France’s Provence region. This one was made Syrah-dominated along with some Mourvedre and Grenache as well.
I ordered the Organic Hangar Steak à la Poêle for my main course. Despite my seven years of French classes, I needed do some follow-up research to learn that “à la Poêle” simply meant that the steak is cooked in a frying pan. The accoutrements is where this dish gets a bit more exotic…I’ll quote directly from the menu description: “bone marrow, smoked beef tongue, pea greens, shiitake mushrooms, shallot purée”.
I’m just now starting to get a bit more adventurous with my meat choices, so two of these items served with the steak were new to me. The steak itself was cooked just right, well seared on the outside but pink and juicy inside. Along with the steak, I was enjoying the soft, savory white morsels shaped something like a roasted garlic clove, but I knew it was something else. I had to inquire to figure out that it was the bone marrow that I was sampling. By process of elimination, I deduced the hearty, slightly chewy morsels along with the steak was the smoked beef tongue. These elements combined well with the wonderful steak and the mushroom puree. In these tough economic times, it somehow made sense to be enjoying a dish based on cooking methods developed in previous times when nothing could be wasted.
I’m generally more of a main course guy, and the entrée was very good, but I have to say that dessert was actually my favorite part of the meal. I ordered the Warm Sweet White Corn Grits, served with dried fruit compote and the house-made calaminthe ice cream. I loved the way this dish blended sweet and savory elements, the grits providing the savory and the ice cream with its hint of cinnamon flavor providing an interesting sweetness.
I’d say the only room for improvement I could see is for them to iron out the serving routine a bit more. At the old Craigie Street, the attentive service made one feel as if they had opened the restaurant just for you that night. Our server was very friendly and knowledgeable, to be sure, but there were sometimes longer intervals between his appearances than I would have liked. But I suppose that’s to be expected after being open for just 11 days.
That minor critique about service aside, I would definitely say Chef Tony has brought all his great vision and skills over to the new place. That’s welcomed good news along with the fact that a lot more people can enjoy his wonderful creations every night!
« Cumin Sage Rubbed Pork Chops with Onion Sauce
Working on my French…cooking, that is »