When my friend and fellow wine aficionado offered to share a wine written up as “almost-perfect”, I was intrigued. I eagerly accepted the opportunity, and set to planning a little dinner. The wine in question was the 2001 Mas de Daumas Gassac, Cuvée Emile Peynaud. The wine is labeled a “vin du pays” which typically implies a humble French wine, but here the term applies because this wine doesn’t conform to the traditional French wine classifications. It’s made from 100% Cabernet Sauvignon grapes, produced according to the methods of the Medoc region of Bordeaux. They have found a way to make some pretty wines in the foothills of the Massif Central, a previously overlooked part of the Languedoc region. (source: “The World’s Greatest Wines”).

Typically I’d plan a special meal to go with such a wine. But the evening we landed upon for this wine coincided with Game 5 of the Stanley Cup Finals, so I wanted a simple preparation that could be made and enjoyed before the puck dropped. A big Cab seemed to call for beef; Grilled NY strip steaks topped with grilled onions, along with some salad and couscous, answered the call nicely. If you’re looking for a simple grilled steak recipe, check out my Grilled Ribeye with Simple Spice Rub, which would be fairly similar to the strip steaks we enjoyed with the bottle of Mas de Daumas Gassac. 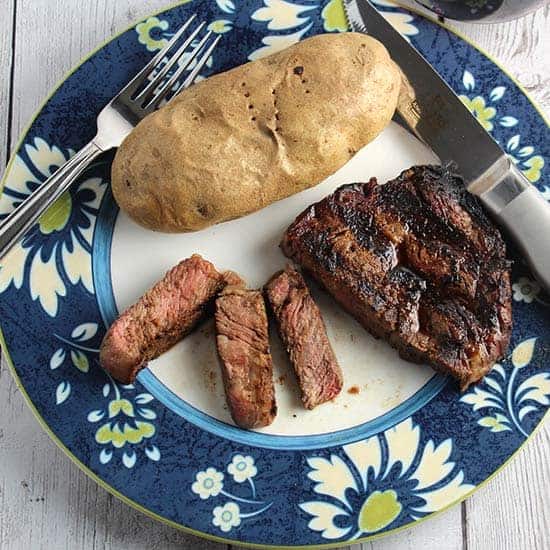 John and Liz arrived at the appointed time, and John eagerly set the bottle in a suitably prominent place on the counter for us to admire.  “Should we start with some white, and save this for dinner?” I inquired. This would be following be the typical approach to this sort of foodie gathering at our place.

John smiled, “I think we should get started with this now,” proffering the Mas de Daumas Gassac, “It’s going to take awhile to drink and enjoy this.”

Now, this comment was a bit of a head scratcher at first. This was not a larger bottle of wine, and when several of us gather on such an occasion, there is usually more than one opened in the course of the evening. John continued, “It’s a very big wine. We opened it at Pairings when I bought it yesterday.”

Hmm, interesting. A substantial investment in a bottle of wine that’s a dozen years old, and it was opened the previous day for a couple of small tasting pours? But John’s confidence that the Mas de Daumas Gassac would hold up to being open that long was well-founded.

Now here’s where I must confess the limited notes I do take were tossed somewhere during the quick post-dinner/pre-game cleanup. What I recall a week later was that this hit me from the start as being a huge wine, big bouquet of forest floor and blooming flowers. The first taste was a bit overpowering, I’m quite sure my first comment was simply, “Wow!”. Never could have guessed that it had been opened for 24 hours nor that it was a 2001. Taste of leather, prunes and ripe berries. It evolved in the glass, softening a tad, showing great depth and complexity, various spices coming through along with the other tastes. It surely was a wonderful treat! 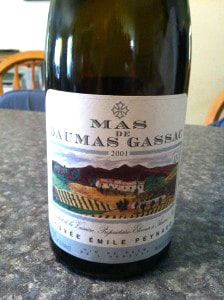 The production of this wine from Mas de Daumas Gassac was extremely limited; 2,500 bottles according to this article. That low number along with the great quality means if you happen to find a bottle somewhere it is not likely to be inexpensive!

Now, on to this comment I read about this wine being “almost-perfect”. That leads to an interesting question…is there such a thing as a perfect wine? It strikes me that a winemaker might might have some vision for the perfect wine that she might make from a particular vineyard. But I suspect that might be a quixotic quest. For those of us who simply enjoy good wine, what would constitute perfection? A top notch Bordeaux? Barolo? Or perhaps this interesting gem from the Languedoc?

Alas, I suspect we could not single out one wine as being truly perfect. But I’m willing to try others that are associated with claims of perfection! Trying to coax the most wonderful wine out of a great vineyard is truly a noble quest, one that I’m happy to appreciate.

« A Taste of Saratoga Springs
Grilled Swordfish with Pineapple Salsa »