Apricot Lamb Tagine, called “Mishmishiya” in Arabic, slowly braises in the oven with cinnamon, cumin and garlic. The recipe results in tender meat with a delicious combination of savory, sweet and spice.

Lamb tagine is one of those dishes that has always sounded appealing, but for some reason I hadn’t gotten around to making…until now. Given how much we all loved this Apricot Lamb Tagine, I will definitely making this again soon!

I got the idea for this dish from the apricot lamb tagine recipe found in The New Book of Middle Eastern Food by Claudia Roden (Amazon affiliate link provided to the cookbook). Her version is cooked on the stove top, but I adapted this to slowly braise in the oven. I got some tips on timing and temperature for braising the lamb tagine from this recipe from David Lebovitz. I was very pleased with the results!

Slowly braising the tagine in the oven takes longer, but there’s not a lot of active work once you get it going. Enjoy the delicious smells of lamb and cinnamon slowly cooking as you relax!

This apricot lamb tagine is Moroccan in its flavors but Roden explains it was developed in Paris, one reason why it uses fresh ginger instead of dried, which would be more common in Morocco. The name for the dish “mishmishiya” comes from the Arabic word for apricot, mishmish.

Serve this lamb tagine over couscous and enjoy!

If you liked this recipe, you might also want to try our Beef and Lamb Tagine! And another great lamb recipe is our Slow Cooker Irish Lamb Stew.

We found ourselves eating this lamb tagine over a few nights. I’d say I liked it best with the Mas de la Dame Les Baux De Provence Cuvee La Gourmande ($16, 13.5 % ABV). This wine is a blend of 50% Grenache, 50% Syrah. I really enjoyed it and it paired well with the lamb tagine. I didn’t take down tasting notes, so will share Ray’s notes from Pairings Wine and Food, “Full and fine red licorice bouquet, with the same in the mouth plus garrigue flavors.” 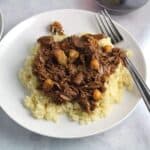 Lamb tagine slowly braises in the oven with cinnamon spice for tender meat, and gets great flavor from the addition of apricots.

Tools to use: Providing an Amazon affiliate link for the Lodge Dutch oven that we use. I would get a percentage of the sale if you choose to purchase using one of these affiliate links. As always, we only share about products we use and recommend based on our experience.