This Chipotle Chicken and Black Beans recipe has a nice spicy kick. A Gewürztraminer from Alsace, with taste of honey and pear fruit, makes a great wine pairing for the recipe. Read on for more information about the recipe and the wine we paired with it, or click here to jump down to the recipe. 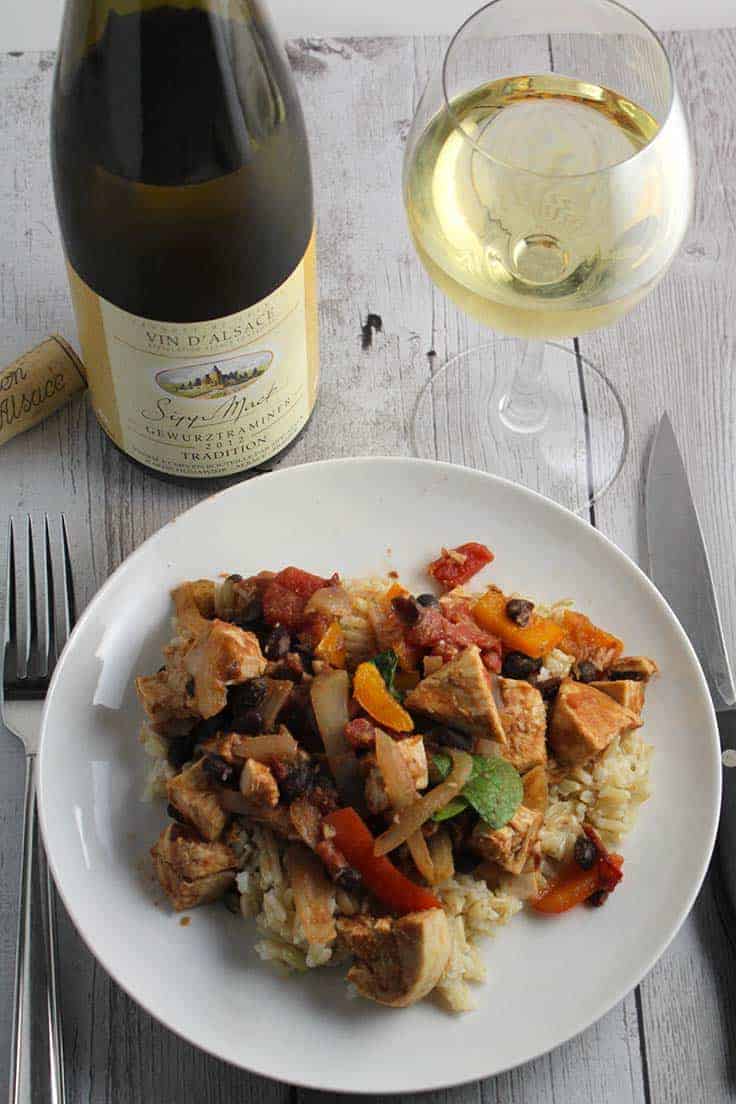 Typically I like to try a new wine for blogging events like the French Winophiles. But when I heard the French Winophiles would be visiting Alsace today, I decided quickly I’d be opening one of my favorite wines to go with spicy food, which hails from the region. The question was, what would I make.

The Gewürztraminer I’m referencing here today has been paired successfully with Indian food several times. This Gewürzt also paired nicely with a carrot ginger soup that has some good kick. But today I decided to go with chipotle flavor, and the tasty result was this Chipotle Chicken and Black Beans recipe.

I originally was planning to make a vegetarian black bean chili to pair with the Gewürzt. But last weekend I wound up cooking up more chicken than I knew what to do with. So I changed my direction a bit, making a skillet meal that has onions, garlic and chipotle pepper cooking up with black beans. The cooked chicken gets tossed in toward the end. So make note, this Chipotle Chicken and Black Beans is a good recipe to go to when you have extra chicken.

I’m sure you could make this dish by adding uncooked chicken earlier than I call for in the recipe, to give it time to cook. I’ll try that at some point and update with my timing notes. 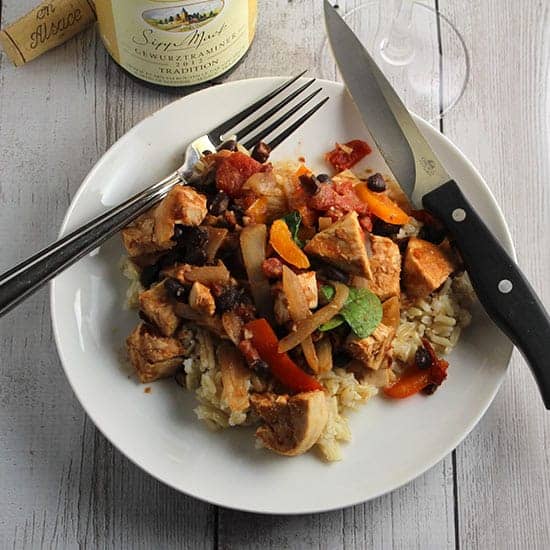 The Chipotle Chicken and Black Beans get served over rice. The dish came out with a fairly high chipotle spice level, so you definitely want to have the rice with it to take the edge off a bit. Of course, the wine helps with that too. Speaking of which, it’s time to talk wine!

As I noted, we had our wine picked out before we had come up with the Chipotle Chicken and Black Beans. The 2012 Sipp Mack Gewürztraminer Tradition ($20, 13% ABV) has a nice floral nose, with taste of honey, pear, and some cinnamon spice. The wine also has a touch of minerality, always nice for food pairings. The sweet honey aspect of the wine certainly was a good offset for the heat of the chipotle peppers in the dish, and I was certainly happy for each sip of the refreshing wine. Definitely a good pairing. 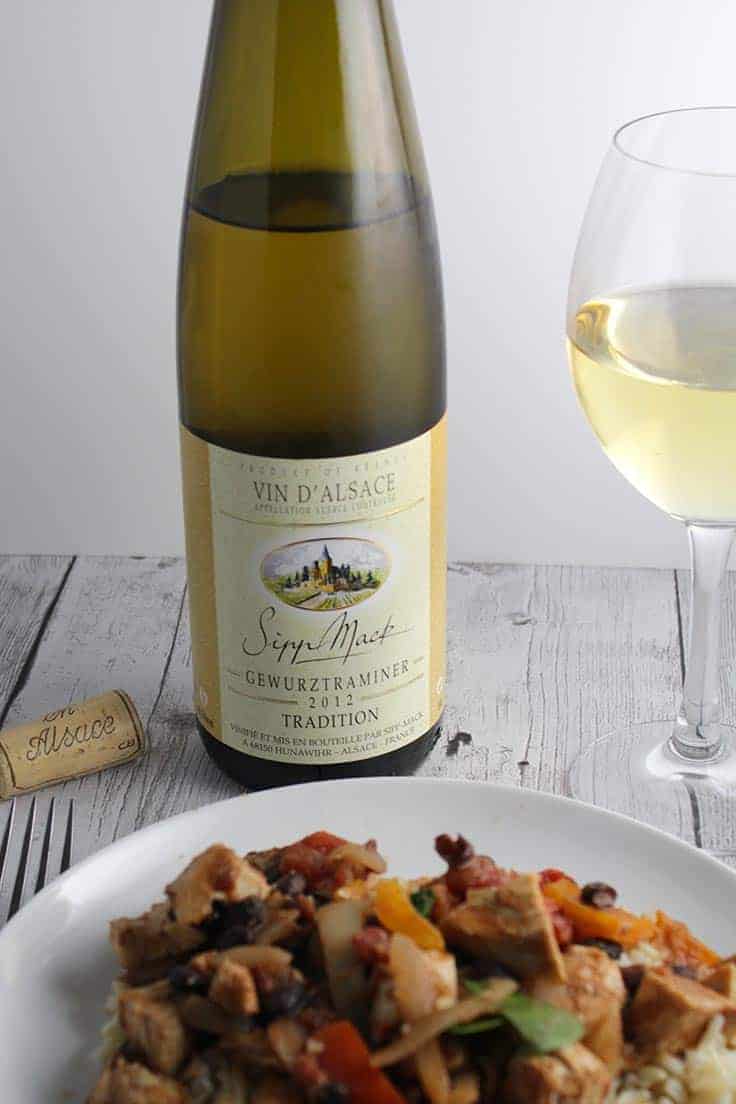 The Alsace wine region located in northeastern France, on German border. I recall learning about Alsace in history classes due to the conflicts between France and Germany that saw the region under German rule at various points. You can definitely taste the German influence in the white wines from Alsace.

The Alsace wine region is broken into two main areas, Bas-Rhin to the North, and Haut-Rhin to the south. The Sipp Mack winery is located near the top of the village of Hunawihr, which is toward the northern end of the Haut-Rhin region. According to Wine Folly, 19% of the wine form Alsace is made with Gewürztraminer, just a bit less than Riesling and Pinot Blanc. So trying a Gewürztr with our Chipotle Chicken and Black Beans certain gave us a good example of the Alsace region’s wine.
Time to check out the Chipotle Chicken and Black Beans recipe details! 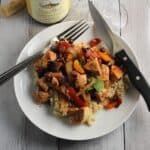 Chipotle Chicken and Black Beans have some good kick! Tasty and easy way to use extra cooked chicken. Served over rice.

Be sure to check out all the tasty Alsace wine and food pairings from the French Winophiles! 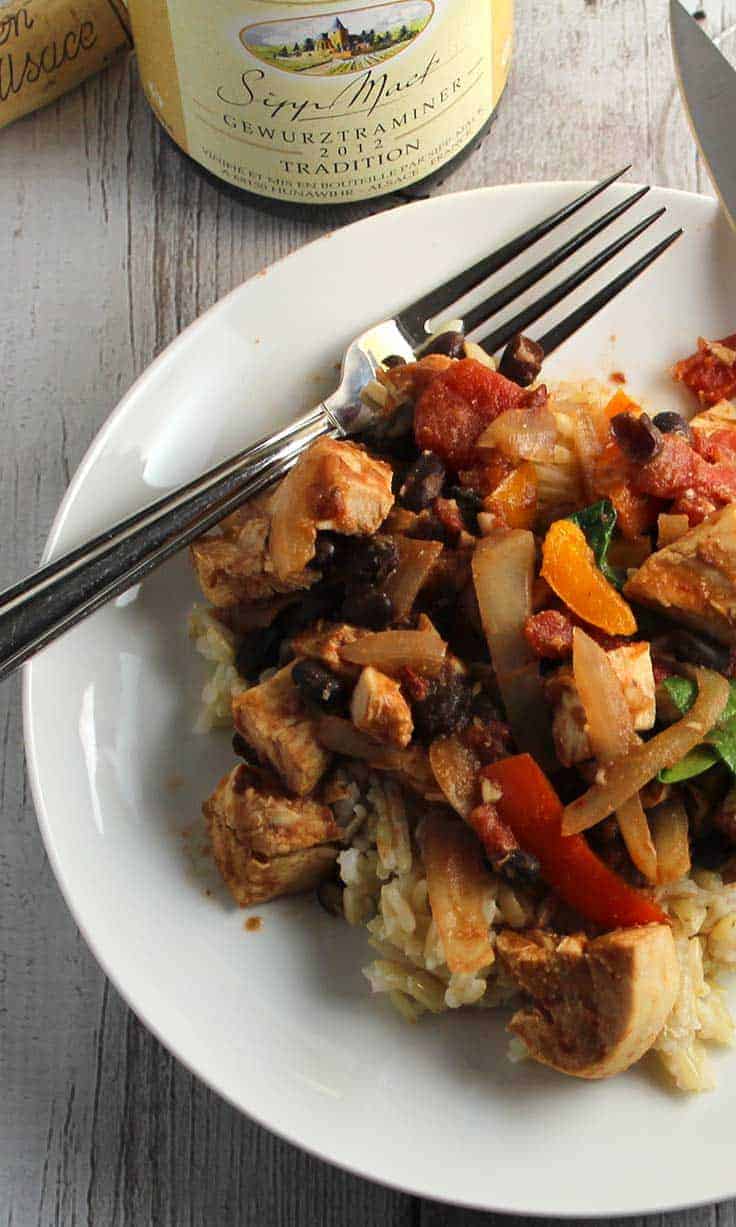 Join us Saturday, February 18th for a live Twitter Chat at 8 am PST/11 am EST using #Winophiles.