This Mushroom Mac and Cheese Casserole recipe is a hearty vegetarian entrée that is a great way to use leftover cheese. We paired this dish with a red wine from Lirac, as part of the French Winophiles exploration of this region in the Rhône River Valley. Disclosure: the wines discussed in this article were provided as complimentary samples. 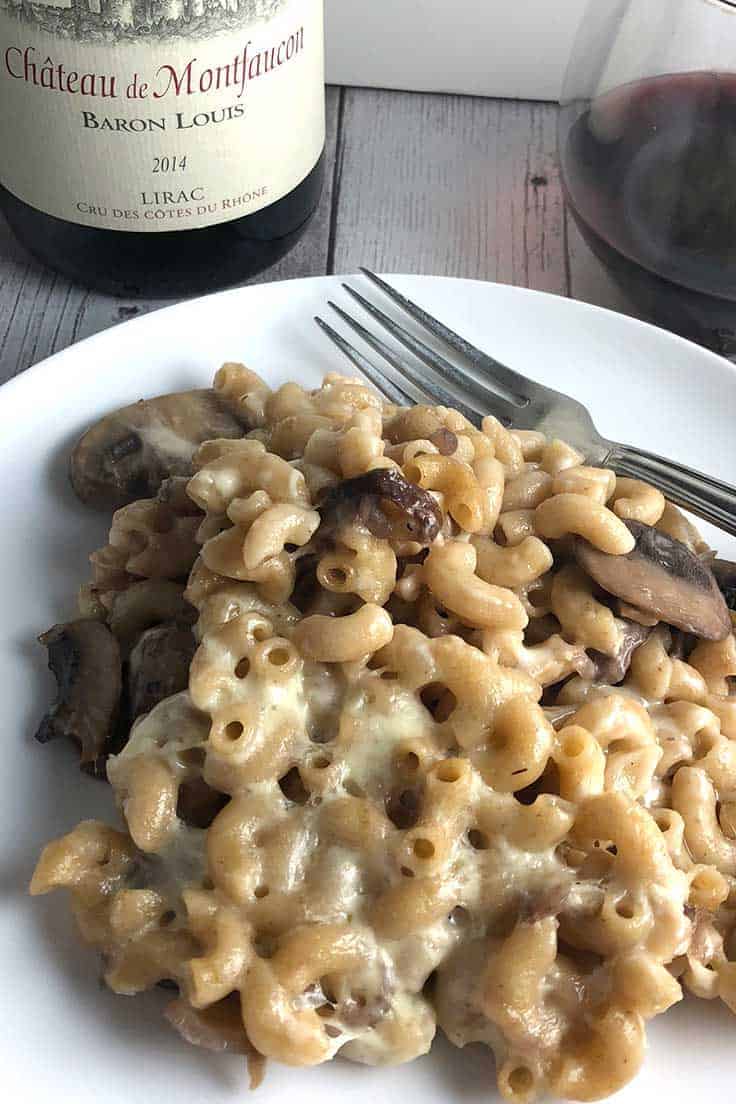 This month, we had a chance to sample and learn about wine from the Lirac region of France. This was a great opportunity to discover a wonderful, under the radar part of the Rhone Valley.

Hard to believe a fairly serious wine guy like myself could go this long without knowing about a Rhone Valley appellation like Lirac. But hey, there’s a lot of great wine in France and there’s always something new to be found!

I must apologize to the winemakers who sent some great ideas for pairing the red Lirac wines with things like lamb and duck. I’m sure those are great options, but our featured recipe for this Lirac event is a vegetarian Mushroom Mac and Cheese Casserole!

We’ve been sampling a lot of red wine lately. Sure, we’ve had some great meat dishes like the BBQ Beef Stew that I paired with a Duckhorn Merlot, but we like to include a few meatless meals in mix each week. The Mushroom Mac and Cheese Casserole is definitely a vegetarian meal that is red wine worthy!

Before I talk more about the dish and the pairing, let’s learn more about Lirac.

About the Lirac Wine Region

Lirac is the southernmost cru in the Rhone Valley wine region. Although it may be unfamiliar to many US wine lover, wine has been produced in the area for over 2000 years. Lirac was awarded AOC status in 1947, so the area is no stranger to making great wines.

Lirac is one of the few Rhone AOCs producing red, white and rosé wines with the appellation. Reds are most common, comprising 83% of production, based on the typical southern Rhone “GSM” grapes– Grenache, Syrah and Mourvedre. 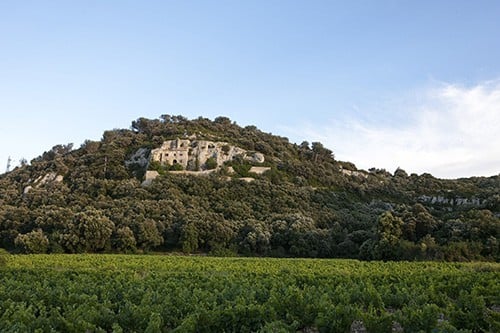 The Lirac AOC enjoys plenty of Mediterranean sunshine, and the vines are kept healthy by the Mistral, a dry northerly wind that blows persistently (I recall Mistral being a vocab word in high school French class!).

OK, let’s move on to talk about our featured recipe we cooked up for this Lirac tasting. 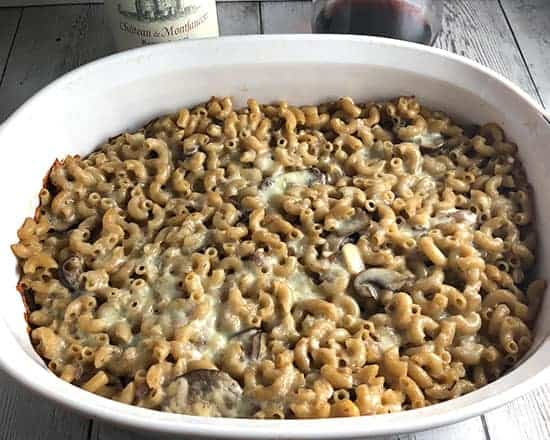 This Mushroom Mac and Cheese is a great dish to make to use up extra cheese. OK, I know you might be rolling your eyes about the concept of needing to worry about how to use leftover cheese, but it happens!

Earlier this month we had a fall wine & apps gathering at our home. Before we got to the grilled kielbasa, which went nicely with the Chateau d’Aquéria Lirac, we had several cheeses out for nibbling. I distracted people by rolling out Pumpkin Patch Soup and Roasted Beet Dip, and we wound up with quite a bit of extra cheese. In comes the Mushroom Mac and Cheese Casserole! 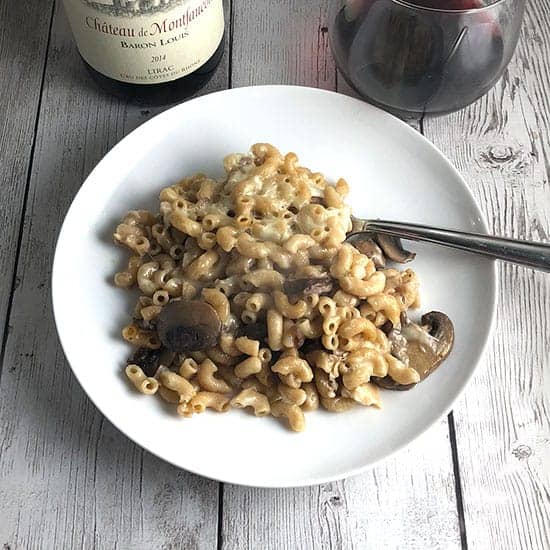 You could make this recipe with any number of cheeses you might have on hand. I used Midnight Moon, an aged goat cheese. But any big flavorful cheeses that go well with red wine could work here — think cheddar, Gruyere, etc.

Get your cheese grated, then it’s just a matter of sautéing your mushrooms and cooking the pasta, and you’re ready to put the Mushroom Mac and Cheese Casserole in the oven. That would be the perfect time to open some red wine; a bottle from the Lirac region could be just the thing! 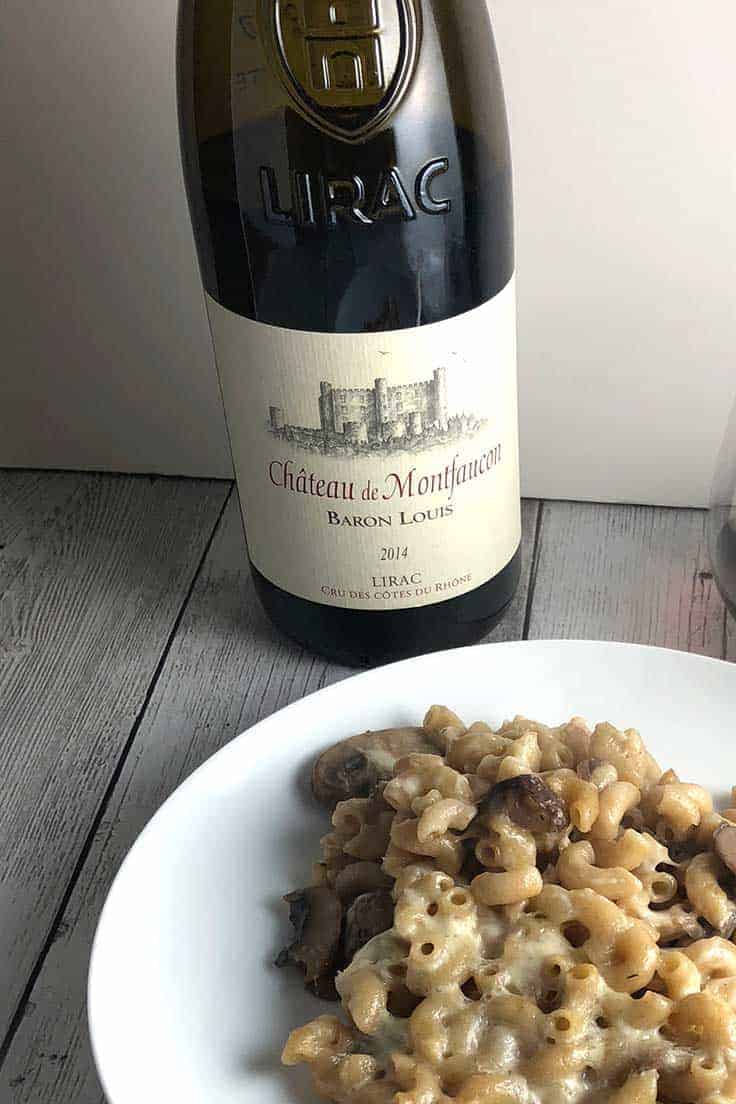 We opened the 2014 Chateau de Mountfaucon Baron Louis Lirac Rouge ($24, 14% ABV) to go with our Mushroom Mac and Cheese Casserole. Woodsy forest floor aroma on the nose, and raspberry fruit on the palate and vanilla notes on the finish. I found this Lirac more tannic than the other two reds we sampled.

The tasting sheet notes this wine is quite age worthy and I could definitely seeing it involve over the next several years.

While I could see meat dishes working even better with this Lirac Rouge, given its tannins, the mushroom mac and cheese has some big flavorful cheese and mushroom flavor that make it match well with a big red wine. So if you are looking for a vegetarian pairing for a Lirac Rouge, this recipe is a good choice!

The Baron Louis Lirac Rouge is comprised of 50% Grenache, 15% Syrah, 15% Cinsault, 10% Syrah and 10% Mourvedre. The grapes are all hand harvested and destemmed. 70% of the blend was aged in oak for 12 months, then bottle aged for an additional 8 months before release.

The Montfaucon was one of four Lirac wines that we sampled for this Winophiles event. Here are the other pairings we enjoyed: 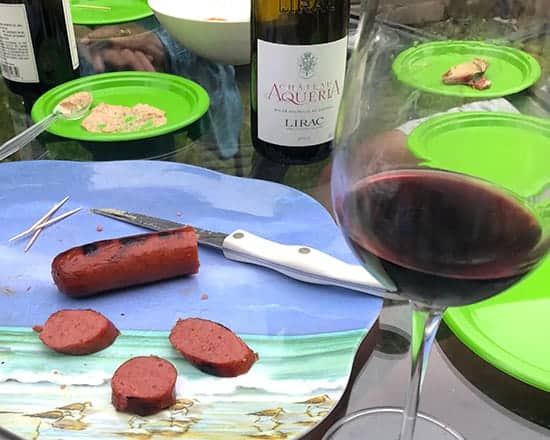 The 2015 Chateau d’Aqueria Lirac ($24, 14% ABV) held its own on an evening where we opened several very good bottles ranging from Chateauneuf du Pape to Napa Cabs. No surprise, seeing as they’ve been making wines for over 400 years!

We had gathered some friends for a fall wine and apps party, a chance to try quite a few wine and food pairings. The Chateau d’Aqueria has plum fruit and spice notes, and worked nicely with some grilled kielbasa sausage. This Lirac also paired well with with some black pepper pâté. This bottle is a classic GSM blend — 50 % Grenache, 25% Syrah, 25% Mourvedre. 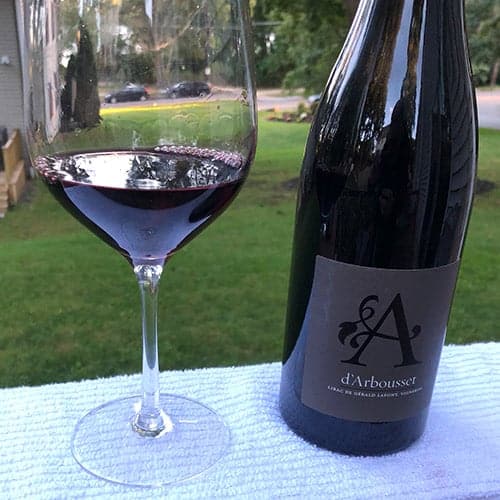 I really loved the 2015 Domaine d’Arbousset Lirac Rouge ($15, 14.5% ABV). Fruit forward on the palate–strawberries and licorice. I was impressed with the finesse of this moderately priced wine. I will definitely be tracking down more of this one! 70% Grenache, 10% each Syrah, Mourvedre and Cinsault. 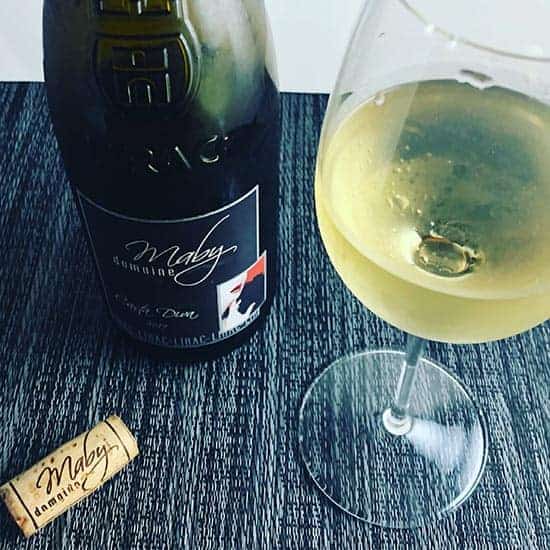 And don’t forget about the white wine from Lirac! The 2017 Domaine Maby Casta Diva Lirac Blanc ($28)  has lush stone fruit–I’m going to say apricot–along with a bit of honey and underlying minerality. A pleasure to sip on its own, it was also great paired with our swordfish with kale pesto and ziti. The Casta Diva is a blend of Clairette and Viogner. 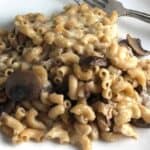 Mac and cheese goodness baked with sautéed mushrooms for a delicious, deep flavor. Perfect with a red wine from the Lirac region of France.