This creamy Pumpkin Patch Soup recipe gets deep fall flavors from roasted pumpkins and garlic along with some Middle Eastern spices. We paired it with a fall amber ale for a perfect fall dinner. This is a meatless recipes, with the creamy consistency coming from the pureed vegetables and pumpkin.

I must confess. I am a pumpkin cooking novice.

Pumpkins are all around us this time of year. Pumpkins are at the farms, the stores and front porches. And yes, they are on food blogs big time in October. Today’s Pumpkin Patch Soup is the first Cooking Chat recipe featuring pumpkins.

I like pumpkins in moderation. Not a fan of pumpkin beer or pumpkin coffee. But I’ve always loved pumpkin bread around Thanksgiving. Yet when I was ready to prepare a pumpkin recipe of my own, I was inspired by a few Middle Eastern spiced pumpkin dishes.

Based on my experience with other squash, I figured Pumpkin Patch Soup would be more flavorful if I roasted the pumpkins first. Once you get the oven going to roast the pumpkins, why not roast some garlic, too? As the weather gets cool, you’ll find a lot more recipes with roasted garlic here on Cooking Chat!

I figured roasting pumpkins would be similar to other squashes, but I did consult this pumpkin roasting tutorial from Oh She Glows for some tips. One good idea was using an ice cream scoop to help remove the seeds!

An immersion blender is so handy for pureeing soups to get a nice, even consistency. You can transfer the soup to a food processor and puree in batches if you don’t have an immersion blender. But if you like thick, creamy soups (without necessarily adding cream), I highly recommend getting an an  immersion blender, so am including an Amazon link for your convenience.

Wine is my go to pairing with most recipes, but I suspected a good beer might work well with the Pumpkin Patch Soup. I pour a glass of Harpoon Flannel Friday Amber Ale to go with the Pumpkin Patch Soup. The hoppy beer has good fall flavors– a bit of nuttiness and hint of butterscotch as I recall–but no pumpkin flavor! As suspected, the Flannel Friday paired very well with our soup. I tried some of the leftover soup with a Merlot, and the beer definitely was a better pairing.

The folks working the Harpoon Twitter account seemed surprised I didn’t know what Flannel Friday was, outside of the name of one of their fall beers. Apparently it’s a theme for craft oriented bloggers, as described on this Flannel Friday site.  I think I’ll stick with cooking, and Flannel Friday for me will be about the beer! 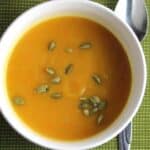 Roasted pumpkins and garlic simmer together and then get pureed for a creamy soup.

Tool and Resources: This post contains Amazon affiliate links for products I recommend related to the article, which means I earn a commission if you choose to purchase using these links.