Leading off the new year with a recipe featuring bacon in the title might not be in the spirit of keeping your resolutions. But the Italian Food, Wine and Travel group is visiting the Basilicata region of Italy today, and I read pork is pretty common in the area’s cuisine. This simple Pasta with Pecorino and Bacon recipe features pork prominently. The recipe does also make good use of humble ingredients you are likely to have on hand. If your resolutions include watching your grocery budget, making this can help you stay on track. With great taste coming through flavorful Pecorino cheese and bacon, you won’t feel like you are sacrificing.

Basilicata is a wine region in Southern Italy, bordered by Campania, Calabria and Puglia. Aglianico is the most common wine grape from the region, well-suited for the area’s mountainous terrain and temperature differentials. Thus it is no surprise I picked a Aglianico Del Vulture to go with our Pasta with Pecorino and Bacon dish. Aglianico Del Vulture is the most prolific DOC appellation in Basilicata, notes the Italian Wine Regions source I referenced for this post. 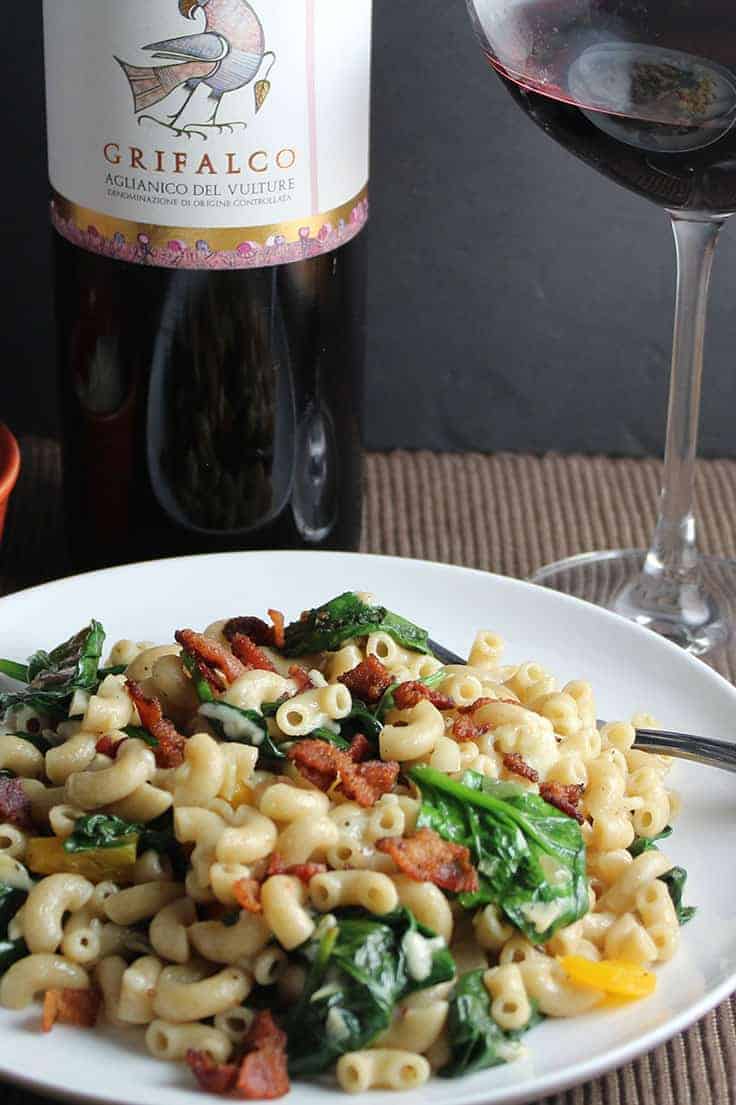 Wine Pairing and Recipe Notes: We opened the 2011 Grifalco Aglianico Del Vulture ($17, 14% ABV) to pair with our Pasta with Pecorino and Bacon. This Aglianico is an inky purplish black in the glass. Summer smells of violet on the nose. It was a bit tight when I first tasted it. Black cherry fruit, firm tannins and notes of graphite. Well-structured wine. It softens a bit in the glass, but the structure definitely remains.

The wine paired OK with some flavor elements of the Pasta with Pecorino and Bacon dish, but I can’t say that it was a winning combination overall. I believe what keeps it from being an “A” pairing is the spinach in the recipe. I tend to think of spinach being a pretty mild ingredient that doesn’t need to be factored into the pairing, but the spinach simmered briefly with garlic definitely adds a distinct vegetal flavor element that doesn’t play nicely with the big red wine.

I confirmed my suspicion that it was the spinach that was causing this to a less than optimal pairing by sipping some of the Aglianico with nibbles of the Pecorino cheese, and the same was true when having some of the wine with bites of bacon. So there are two ways you can go for a better wine pairing. Try this Pasta with Pecorino and Bacon recipe with a white Italian wine, I suspect a crisp white would refresh the palate nicely here. Alternatively, skip the spinach in the dish, and enjoy the wine the Aglianico works with the Pecorino and Bacon. Let me know if you try either option and how it goes! 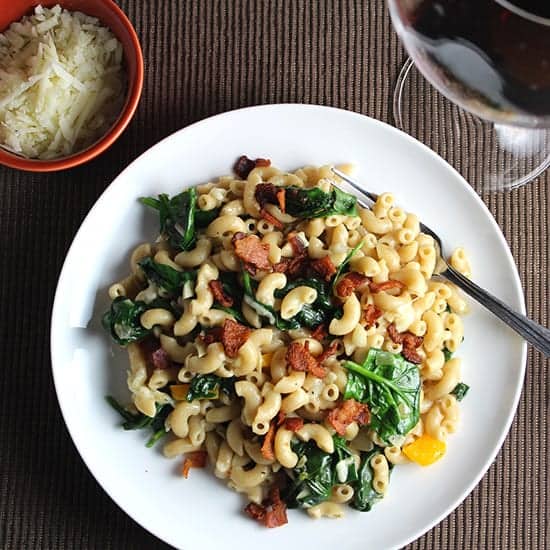 Pasta with Pecorino and Bacon 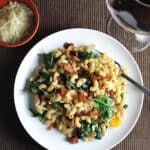 Pasta tossed with Pecorino cheese, bacon and sautéed spinach for a simple and flavorful pasta meal.

Join our conversation!  If you see this soon enough, please join our Twitter conversation on Saturday January 2nd at 11 AM EST. We chat using #ItalianFWT!