Pulled Pork with Cabbage and Bacon is a savory recipe made in the slow cooker. Plan ahead to allow time for overnight marinating and eight hours in the slow cooker. Served with a red wine from the Jura region of France as part of French Winophiles event. Read on for food and wine pairing details, or click here to jump down to the recipe. 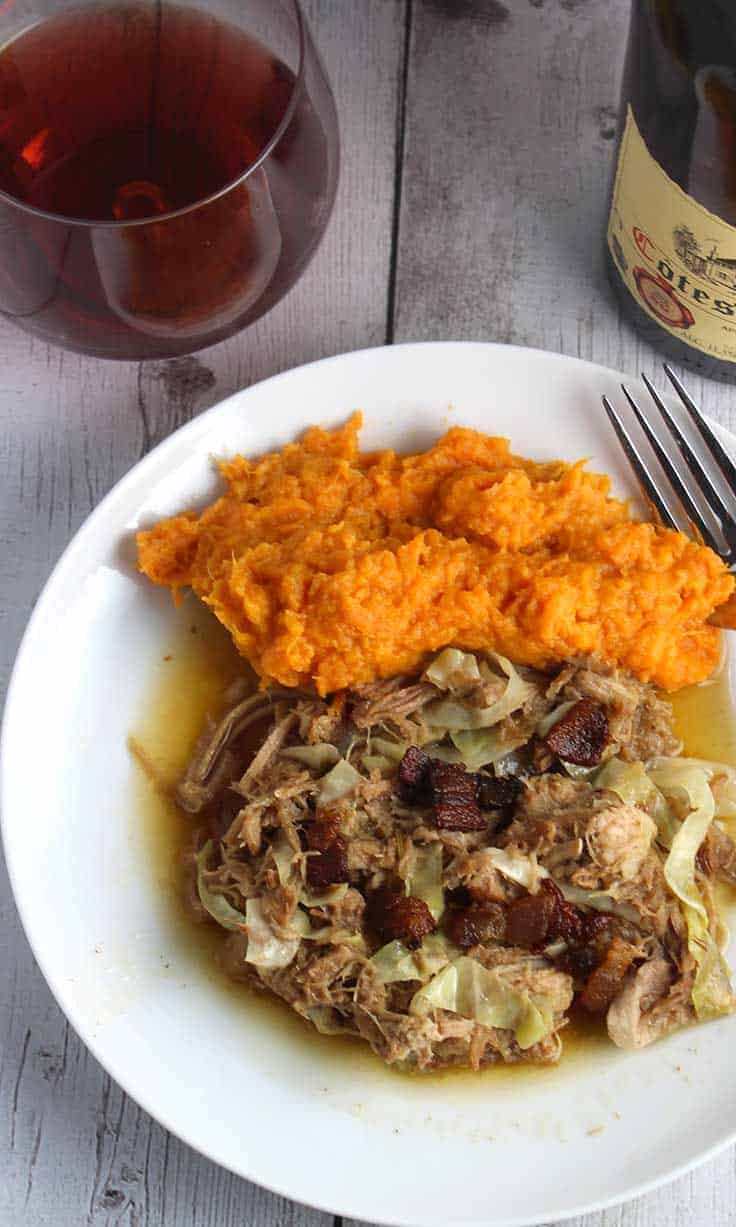 Wine from the Jura

Today the French Winophiles group is visiting the Jura, a region in Eastern France between Burgundy and the Swiss border. The Jura is home to some unique wines that have developed in isolation from trends in neighboring regions, not to mention the rest of the world.

We were dining at Craigie on Main in the late summer, a Cambridge restaurant that includes a good number of off the beaten path wines on its list. When conferring with the sommelier about something that would go with my pork dish, she suggested a bottle from the Jura when I said I’d like to try something different. I knew this Winophiles event would be focusing on the Jura, so I readily jumped on the chance to sample a bottle.

That evening at Craigie we had the 2014 Arbois “Les Grands Vergers” (appx. $35, 12.5% ABV) from Michel Gahier, made from Trousseau grapes.  in the Jura region of France. The wine has a (good) funky nose, with a flavorful taste profile, plum fruit and a bit of tartness.

The Arbois Les Grands Vergers paired well with the pork 3 ways at Craigie on Main. So when Ray from Pairings Wine & Food said he could order a bottle of Trousseau from the Jura for me, I started thinking about pork dishes I might make, leading to this Pulled Pork with Cabbage and Bacon recipe.

Pulled Pork with Cabbage and Bacon 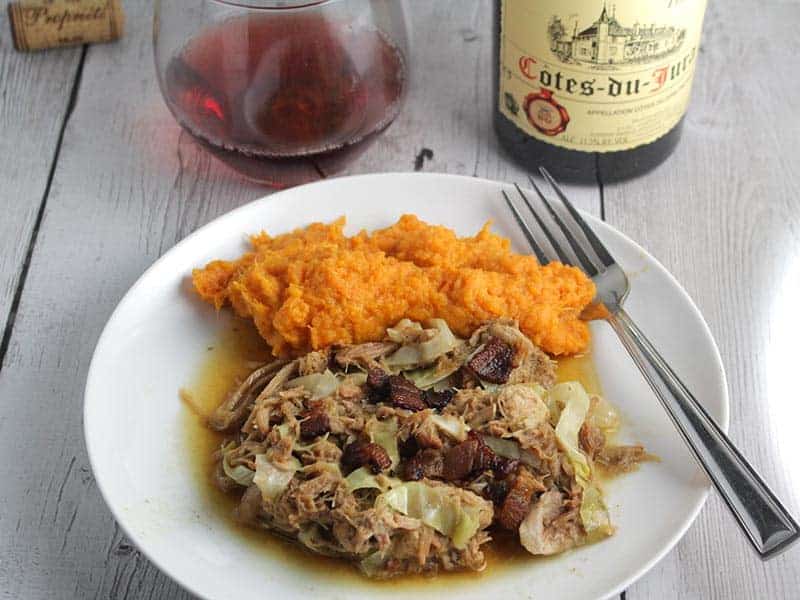 I was planning to make a dish for Winophiles on what turned out to be a busy weekend of fall baseball, which pointed me in the direction of a slow cooker recipe. I decided to adapt the basic slow cooker pulled pork recipe I posted previously. This recipe is a fairly traditional, BBQ style recipe. For Pulled Pork with Cabbage and Bacon, I tried to focus on some fall flavors that I thought might also be found in a mountainous region in France. The spice blend for the pulled pork with cabbage includes sage, rosemary and fennel, and the pork gets slowly cooked with ingredients like maple syrup and apple cider–sounds like fall, right?

Shredded cabbage gets added to the final phase of cooking the pulled pork. The recipe starts and ends with bacon. First, we start the process by crisping some bacon in a skillet that then gets used for browning the pork shoulder. That bacon gets put aside to then top the pulled pork with cabbage dish.

This pulled pork with cabbage recipe is definitely a plan ahead deal. The process begins by marinating the pork overnight, followed by 8 hours of slow cooking. The savory pork and cabbage dish is worth the effort! Definitely a good fall or winter meal.

We served the 2014 Chateau L’Etoile Cotes-Du-Jura ($17, 11.5% ABV) with our Pulled Pork and Cabbage with Bacon. This wine is made from 100% Trousseau, a red wine grape that originated in Eastern France. The wine is very light red in the glass. I got anise on the nose, with a tart cherry taste. Light acidity. This easygoing wine was a good match for the flavorful pulled pork with cabbage, and also worked with the Sweet Potatoes with Cumin Sage Butter we had on our plates. 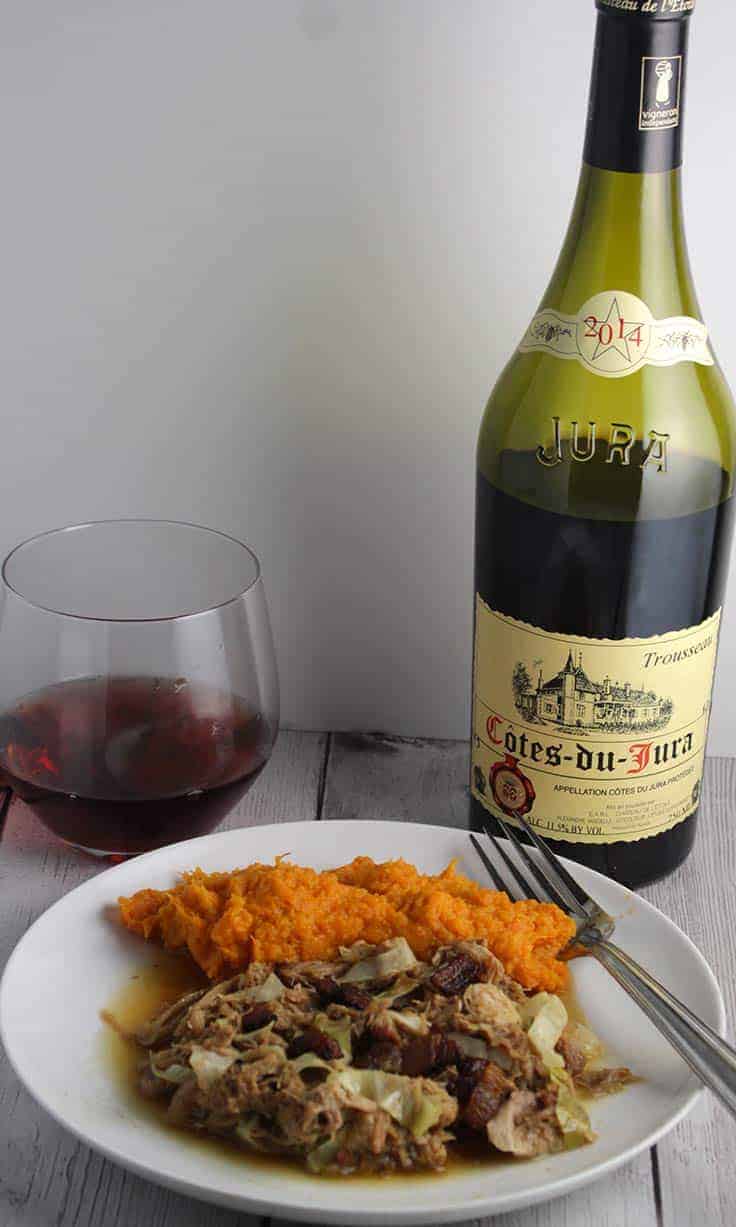 It was interesting to have a chance to sample two Trousseau wines from the Jura. Granted, I didn’t have them side by side, but it was easy to recall the notable differences. The bottle from Michel Gahier that we had at the restaurant was brooding and funky, with notable tannins.

The Trousseau from Chateau L’Etoile is more straightforward, something I would describe as a younger wine. However, they are both from the same vintage. The Michel Gahier bottle seems to be more in keeping with other references to Trousseau I found online, suggesting that it is a complex and unusual wine typically. Either bottle I tried makes for good pairing with pork!

I did also sample a Chardonnay from the Jura which I really didn’t care for. Not sure if it was the style or a bad bottle, but we will leave it at that and focus on the Trousseau bottles!

For more interesting French wines to try, check out our article on Great French Wines You Might Not Know…But Should!

Pulled Pork with Cabbage and Bacon

Pulled pork prepared in the slow cooker with savory spiced and cabbage, topped with bacon for extra flavor.

Don’t have a slow cooker yet? You’ll need it for Slow Cooker Pulled Pork! We have enjoyed our Crock-Pot, so sharing an Amazon affiliate link below and earlier in the post to the latest version of the model we have. 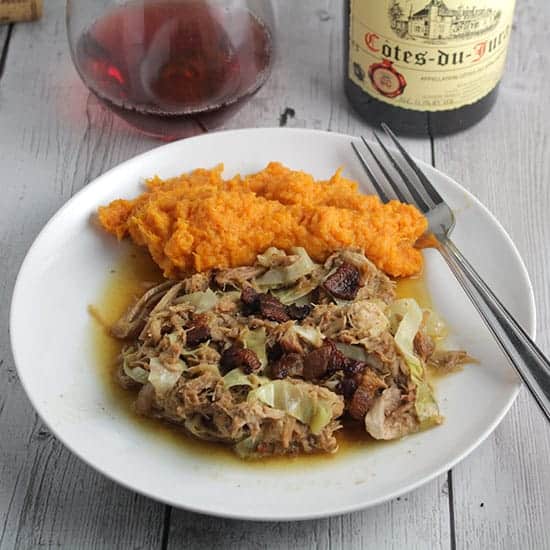