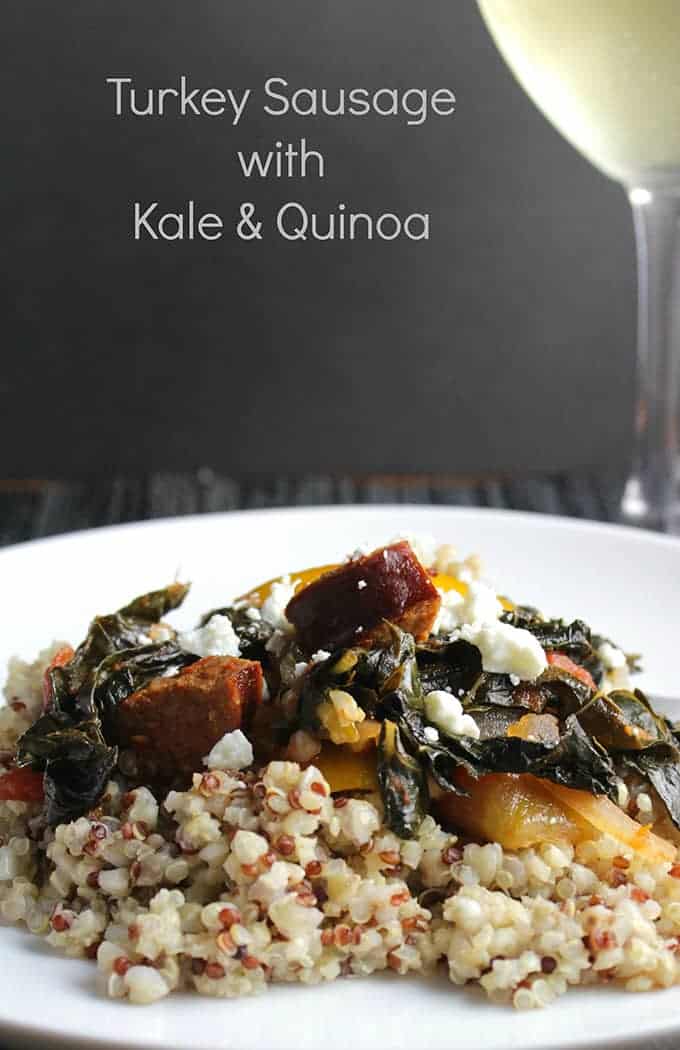 I wasn’t always a fan, but now I’m keen about quinoa! This hearty, healthy grain has a nuanced consistency, and absorbs flavors of your dish well. It’s a bit plain on its own, so the key is to cook something flavorful along with it that has some liquid for the quinoa to absorb. This time, I cooked up some Andouille turkey sausage with kale to serve over quinoa, and it definitely qualifies as a good combination!

I love pasta, but I do have a tendency to lean a bit heavily on it, particularly during a busy patch. With the combination of Little League baseball and work events, spring and early summer is the busiest time for us here! Thus, pasta has been featured a lot. This Turkey Sausage with Kale and Quinoa dish demonstrates that something you might typically toss with pasta also can work great over quinoa for a healthy change of pace. 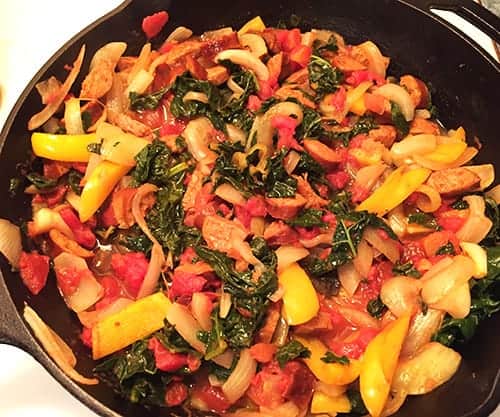 turkey sausage and kale cooking up in the skillet

The quinoa I used for this dish is a “Super Grains” blend from Whole Foods. The package is a blend of white and red quinoa along with millet and buckwheat. The blend makes for a nice presentation as well as flavor.

I’m talking quinoa a lot here, but let me say a word about the kale. We were eating kale several times a week as I was working on the Collards & Kale Cookbook, but I’ve backed off a bit since finishing the cookbook. Realized we hadn’t had kale in a few weeks, so I grabbed a bunch of lacinato kale, which also goes by the name “dinosaur kale”, “dino kale” and “Tuscan kale”. In addition to being bumpy, the leaves of this kale are a bit thinner than the standard green kale, so it cooks up a bit faster. A nice option for a quick meal.

I went with an Andouille turkey sausage, but you could substitute other flavorful sausages. Garlic and herb would do well, for instance. Using turkey sausage along with the kale and quinoa gives you a tasty meal packed with plenty of nutrition! 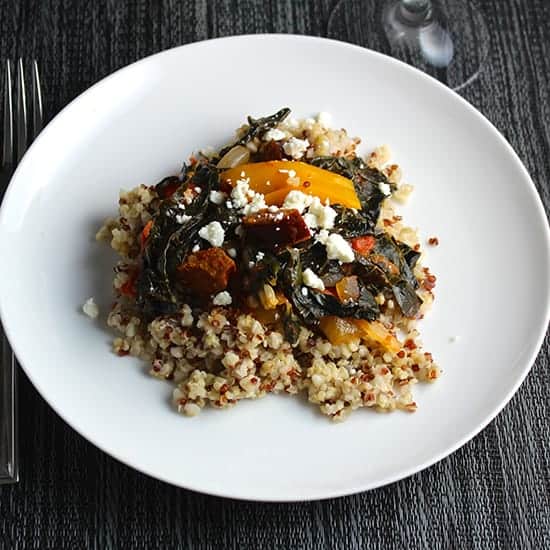 Wine pairing: I went with a 2013 Winzer Krems Sandgruge 13 Gruner Veltliner from Austria(12.5% alcohol, $13/bottle). I didn’t buy this to pair the turkey sausage and kale dish; rather, I hadn’t had Gruner in awhile. It’s definitely a white wine I’m drawn to in the warmer weather, and it tends to be food friendly. This bottle has nice lemon fruit and pronounced minerality.

The Andouille sausage I used had a lot of heat, which I didn’t know when I opened the wine. Of course, Andoiulle sausage always has a good amount of flavor, but some I’ve had the garlic is more pronounced the the hot chili. The heat was a bit much for the Gruner, which was very dry. I’d think a Riesling with a bit of sweetness would be a better match for the dish. My recent dabblings in beer pairings also made me think this dish might be best served with a good beer. Next time I make it I might have to consult my new friends at Mystic Brewery for a beer pairing idea!

Turkey Sausage with Kale and Quinoa 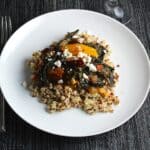 Spicy turkey sausage cooked with kale, onions and peppers in a skillet, and served over quinoa. 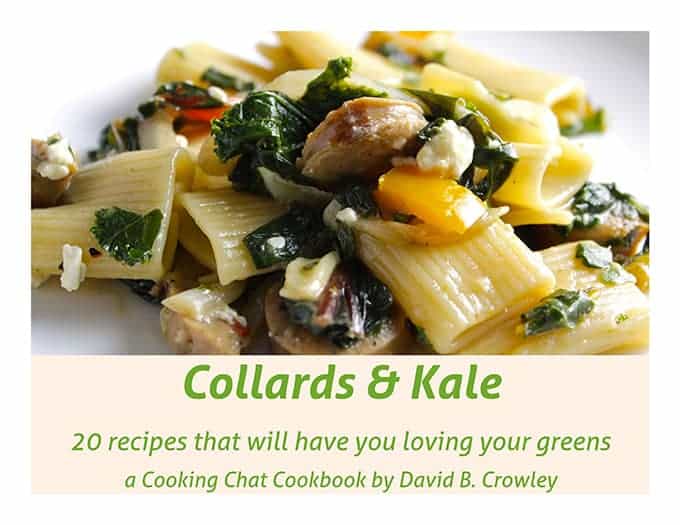