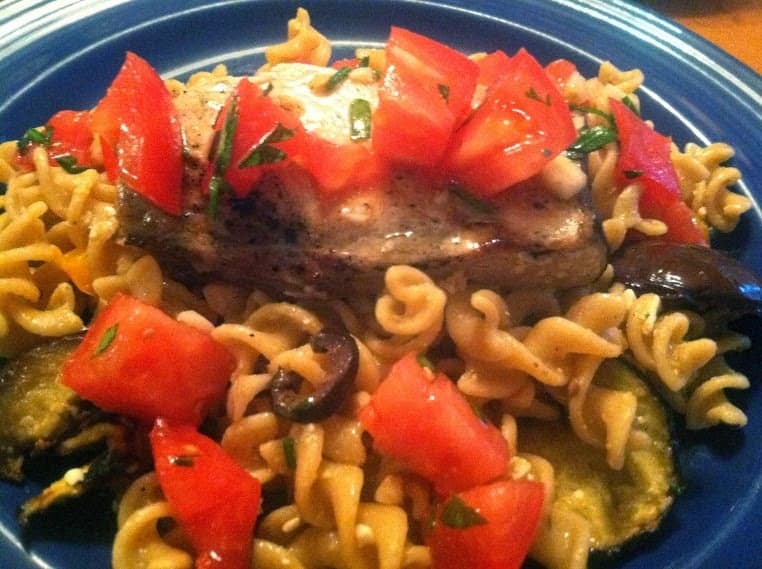 This recipe for Grilled Swordfish and Eggplant with Fusilli and Tomatoes was too good not to share! I was glad to see that the #SundaySupper BBQ Party is featuring a wide array of dishes beyond true “barbecue”, so that I could bring this recipe to the virtual party. Thanks to Jenny from the Messy Baker and Melanie from Melanie Makes for co-hosting the event.

Inspired by the flavors of Sicily, this dish was so fresh tasting with awesome tomatoes and plenty of garlic to punch up the flavor of grilled swordfish and eggplant. A certain someone in our house who often passes on the seafood options was very enthused about how the swordfish tasted in this dish. 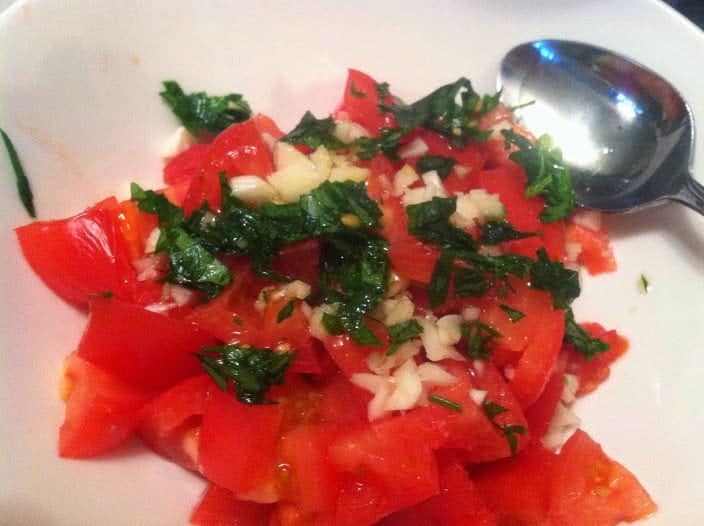 Not a fan of eggplant? I wasn’t either, until I learned to salt it, then grill as I do here. If you’re already a fan, that’s just another reason to make this soon! But please, if you come upon this dish later after tomatoes have gone out of season, please do not make this dish with hardened tomatoes found in the grocery stores in the winter! This is meant to be enjoyed in the summer only, with those awesome tomatoes just starting to roll in. I used a tasty heirloom variety. Enough preliminaries, on with the tasty details! 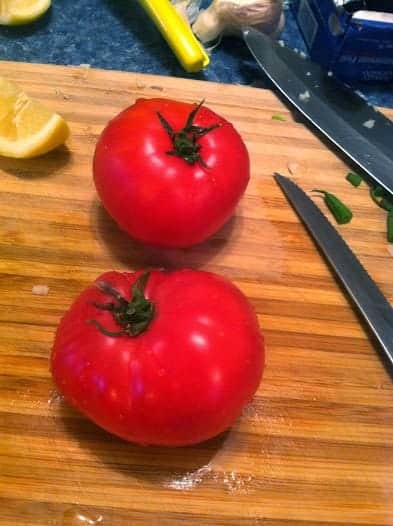 Instructions
First, spread the eggplant sliced out on a plate in a single layer. Salt the eggplant slices generously, and let the eggplant sit and aborb the salt for at least 30 minutes. I’ve found this salting process to be a key factor in getting me to add eggplant to the list of veggies I enjoy. 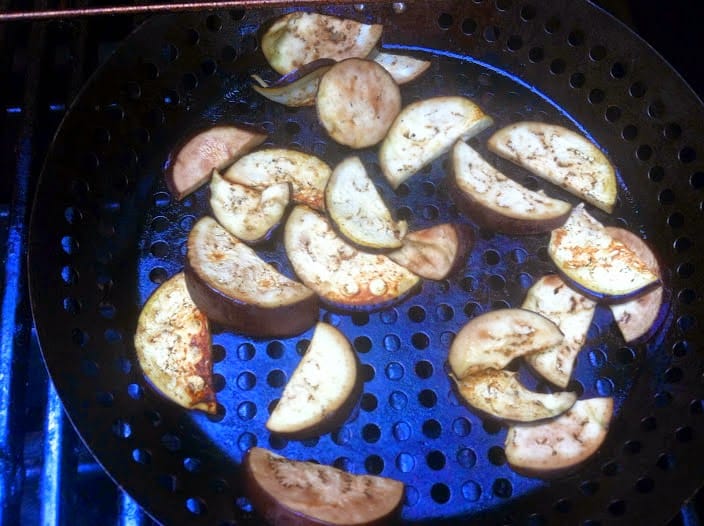 When you put the eggplant on the grill, start a pot of water to boil for pasta and prepare the swordfish marinade. Combine the ¼ olive oil, garlic, lemon juice and a dash of salt in a large bowl. Add the swordfish, and gently turn it over to coat it thoroughly. Let the fish marinade for 10 to 15 minutes at room temp.

As the fish marinades, prep the tomatoes. Gently combine the diced tomatoes with 1 tablespoon of olive oil, parsley, 1 clove of minced garlic and a dash of salt. Set aside. 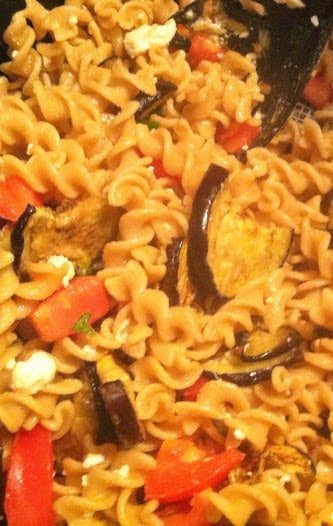 Put the pasta on to cook just before you start grilling the swordfish. Remove the swordfish from the marinade, and gently shake off the excess marinade. Reserve the marinade. Place the swordfish on a the grill, and grill covered on medium high for about 6 minutes. Turn the swordfish over, and grill until just cooked through, which will take about 6 more minutes. Keep in mind the fish will cook a bit more while resting and you don’t want to overcook it. Our swordfish steak was about an 1 ½ inches thick, if yours is different that would impact the cooking time a bit.

When the fish is done, place on a platter and loosely cover with aluminum foil to keep warm as you put together the pasta dish. When the pasta is cooked to your liking, drain it and combine with 1 tablespoon olive oil, the roasted garlic (squeezed out of the garlic skin after it has cooled enough to work with) and eggplant. Next stir in the feta cheese and olives, followed by one-half of the tomato mixture, saving the other half of the tomatoes to top off the dish. Bolded that step because the fresh tomato topping is key to taste and presentation!

To plate the dish, divide swordfish to have a piece ready for each diner. Plate a serving of pasta, followed by a piece of swordfish, then spread some of the reserved fresh tomato topping. A tablespoon or so is good to start, and pass the tomatoes along with parmesan cheese for additional toppings. Enjoy! 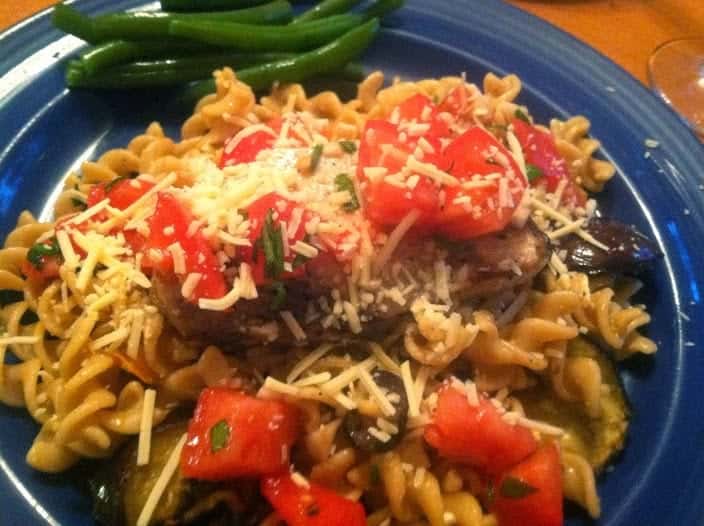 Be sure to check out all these tasty creations from my fellow #SundaySupper bloggers!

Join the #SundaySupper conversation on twitter on Sunday! We tweet throughout the day and share recipes from all over the world. Our weekly chat starts at 7:00 pm ET. Follow the #SundaySupper hashtag and remember to include it in your tweets to join in the chat. To get more great Sunday Supper Recipes, visit our website or check out our Pinterest board. Would you like to join the Sunday Supper Movement? It’s easy. You can sign up by clicking here: Sunday Supper Movement.