This Healthier Hoppin’ John recipe is a traditional Southern dish made with black eyed peas. Our Hoppin’ John gets healthier with turkey bacon used in place of pork. Often eaten New Year’s Day for good luck. This was originally published in 2015, and updated December 2019. This Cooking Chat recipe was also featured in the New Year’s Eve edition of Woman’s World magazine. 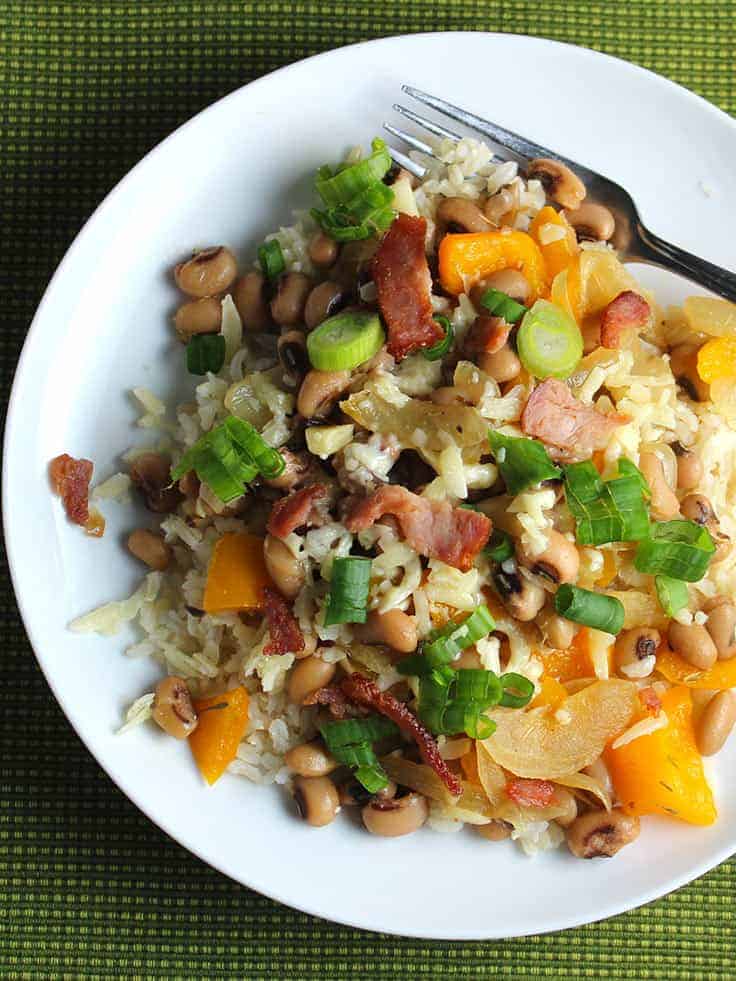 I guess it’s no surprise I acquired a taste for Hoppin’ John during the five years I lived in Kentucky. Hoppin’ John a popular dish in the South, plus I tend to be a fan of flavorful beans and rice dishes, so was predisposed to liking it. Eating Hoppin’ John on New Year’s Day is a tradition in the South, so I thought I’d bring you Healthier Hoppin’ John for this Last Minute Holiday Dishes #SundaySupper.

Check our our collection of Black-eyed Peas Recipes for more ideas of what to serve with this lucky legume!

What is Hoppin’ John?

Hoppin’ John is traditionally made by cooking black-eyed peas with pork fat of some sort–bacon, sausage, or ham hocks. Though it is eaten throughout the South, it is most common in the Carolinas, according to this article. 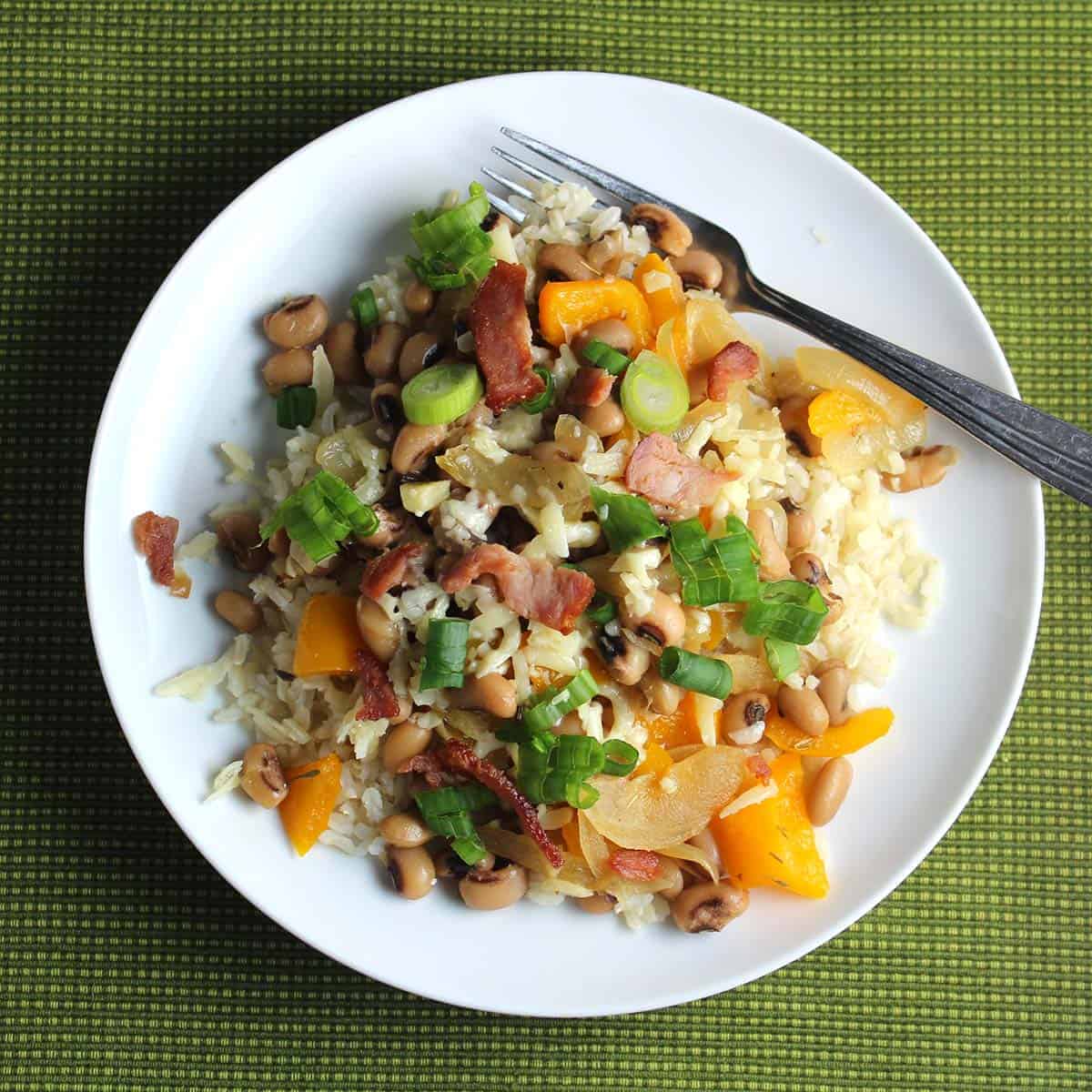 Making Healthier Hoppin’ John comes pretty naturally to me. Jodi was eating mostly vegetarian during the time we were living in Kentucky, and I first had Hoppin’ John at a vegetarian-friendly restaurant in Lexington called Alfalfa. If memory serves correctly, I believe the offered Hoppin’ John as a vegetarian dish. Speaking of vegetarian Hoppin’ John, here’s a recipe from Grandbaby Cakes if you would prefer a meatless version.

Here’s how we made a healthier version of the classic Hoppin’ John dish:

How to serve this dish 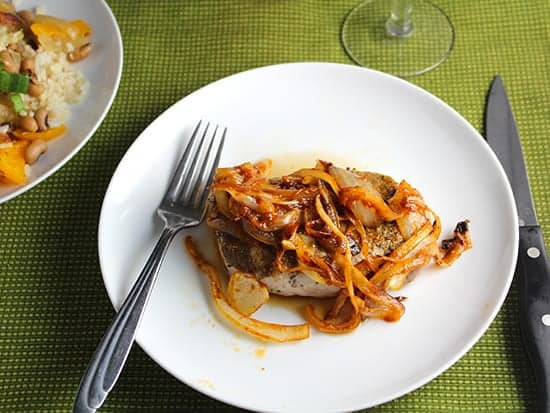 So make this healthy Hoppin’ John as a side for pork or chicken, or serve it as a healthy main dish to start your New Year off right! If serving it as a main, this Smoky Maple Greens and Cabbage Salad would be nice to serve on the side. It uses the same smoked maple syrup mentioned as an optional ingredient here.

As I review this article, I see we didn’t originally have a wine pairing here. We paired the pork chops recipe mentioned earlier with a Cab Franc / Merlot blend, and it worked fairly well. But if I were focusing on the Hoppin’ John for a New Year’s wine pairing, I would certainly think about opening a bottle of sparkling wine!

However you make this healthy Hoppin’ John, I hope you enjoy it and have much good fortune in the New Year! 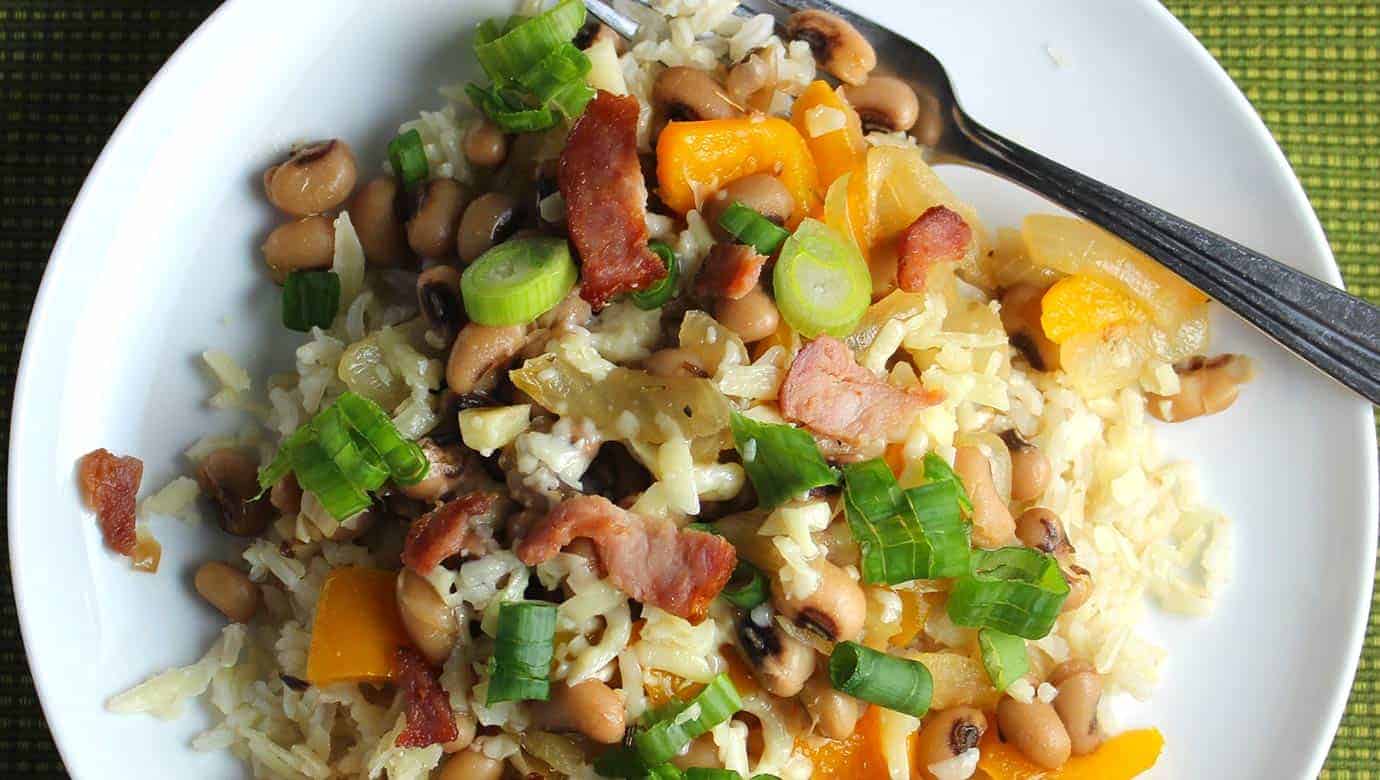 If you want a more indulgent version of the dish, check out our Hoppin’ John Risotto. Or try our Black-Eyed Peas with Collard Greens recipe. 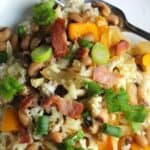