Simple Pan Seared Salmon is our go-to way to cook salmon when we are not in grilling mode. A quick ginger soy sauce marinade provides plenty of flavor, especially when following this recipe to ensure moist, tasty salmon. Read on for more details on how we prepare our salmon as well as our wine pairing for salmon, or click here to jump down to the recipe. Originally published in 2014, updated December 2019 with some new photos, tips and wine pairings. 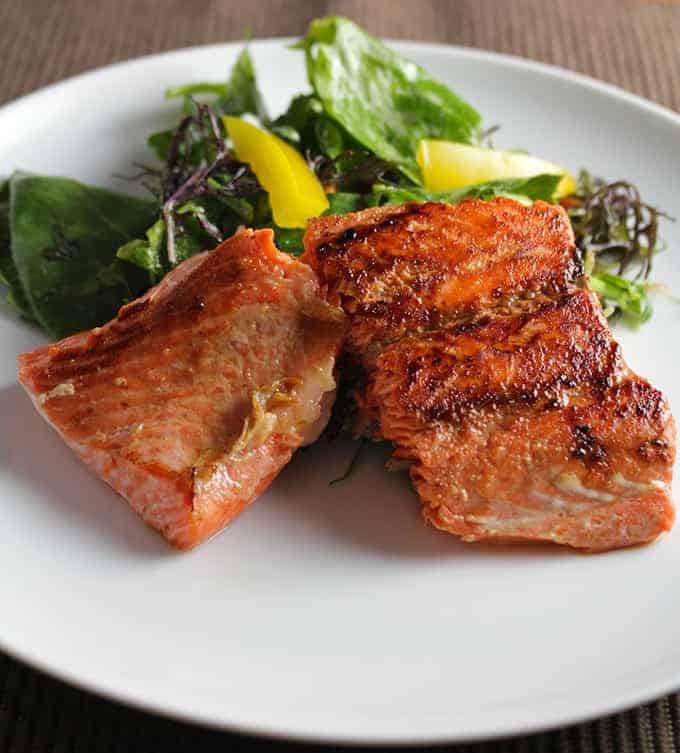 Does this recipe sound for simple pan seared salmon sound familiar? Regular readers of Cooking Chat might recall I recently posted Pan Seared Mahi-Mahi with Orange Soy Marinade, which was really my [successful!] attempt to convert my go-to approach for salmon over to mahi-mahi, which I don’t cook nearly as often.

Can salmon be cooked in a skillet? 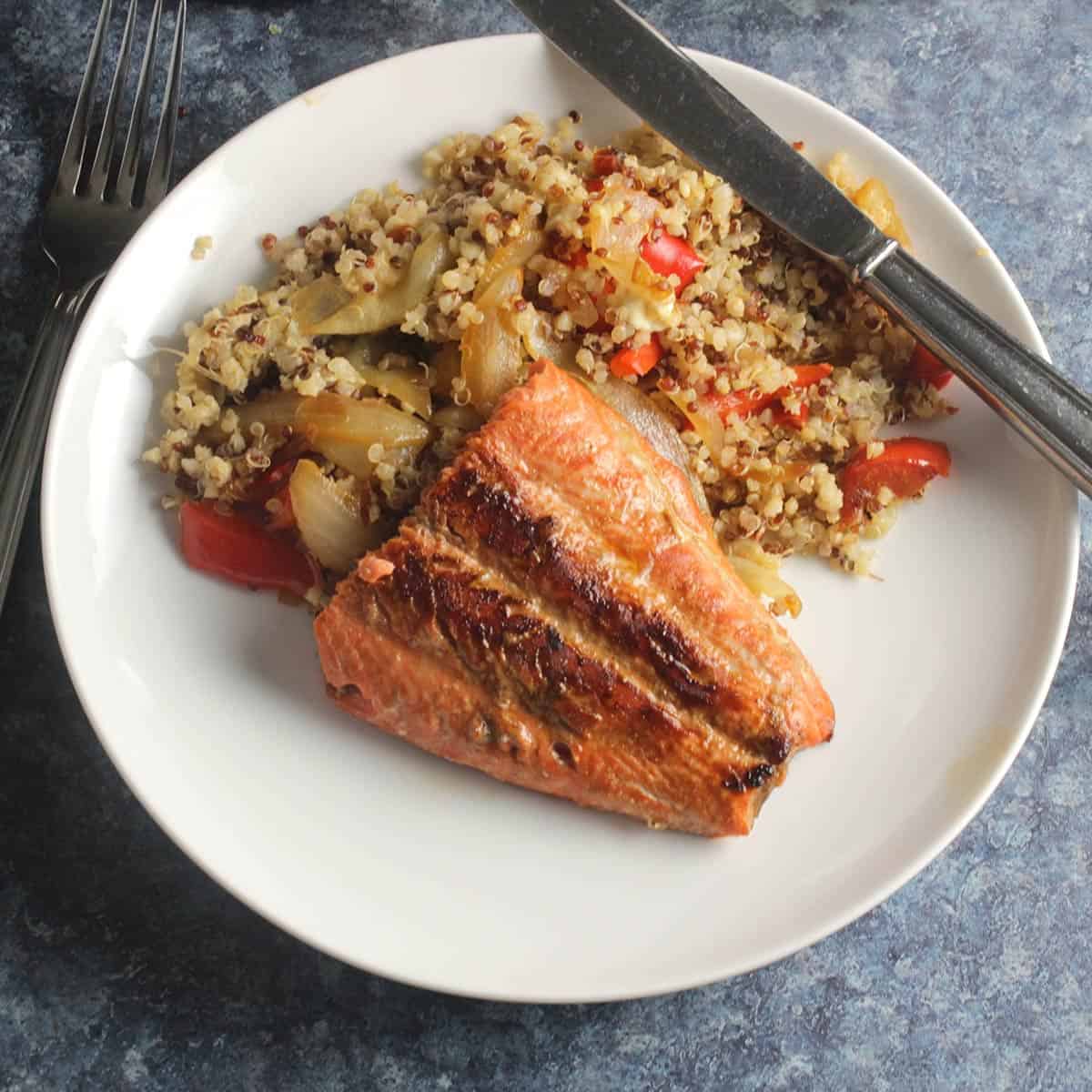 This is one of those recipes that is such a basic part of our menu here that I hadn’t thought to post it until someone tweeted awhile back looking for a simple pan seared salmon recipe.

More recently, I noticed someone found this recipe be Googling the question, “Can salmon be cooked in a skillet?”. We have made salmon in a skillet countless times. Note however that I use a non-stick skillet for searing salmon and other fish; as opposed to the cast iron skillet that is a workhorse for so many other recipes here.

Ordering salmon a couple times at top-notch restaurants taught me that salmon (and other fish) is at its best when it is cooked just right, and that great care must be taken to avoid overcooking and drying it out. I’d gotten that down pretty well for myself on the grill, but it was a recipe in Barbara Lynch’s Stir: Mixing It Up In The Italian Tradition that taught me the pan-searing method here. I took her method and applied the ginger soy marinade given here.

How to Pan Sear Salmon with Marinade

Below are some tips on how making Pan Seared Salmon with Ginger Soy Marinade. Click here to jump down to the recipe card to get the complete step by step instructions. 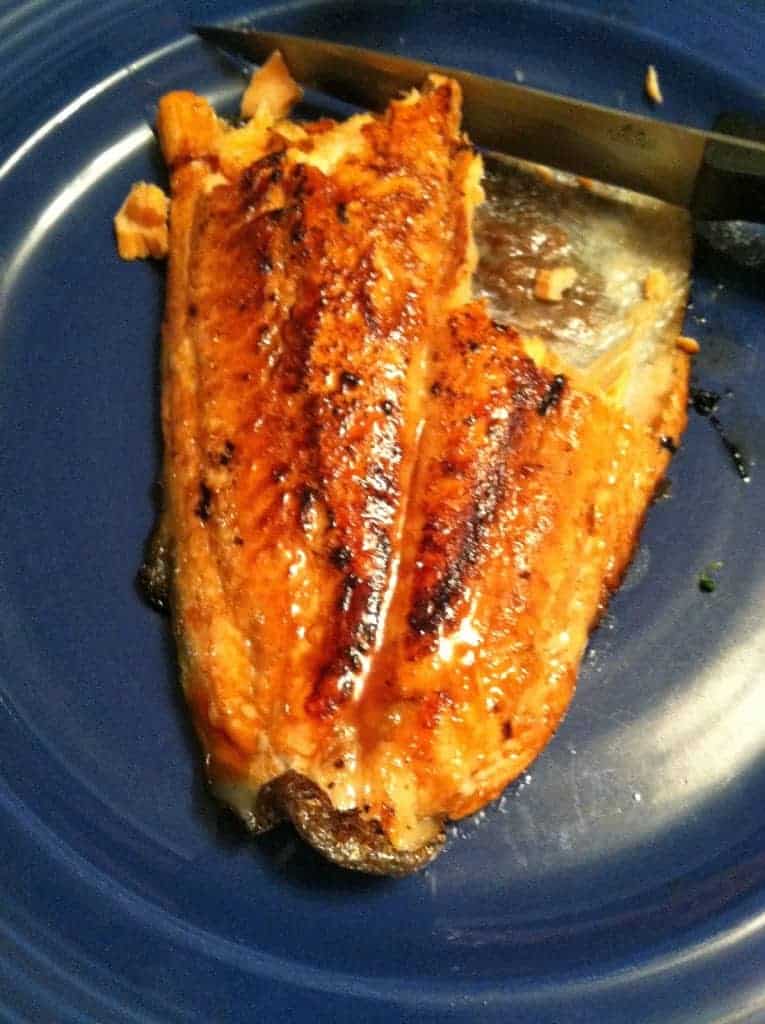 About 10 minutes after the salmon hits the pan, you are ready to serve a tasty meal! The skin will often come off during the cooking, but if it doesn’t, it is easily removed with a knife prior to serving.

Serve the salmon, offering the reserved marinade at the table. Be sure that is the marinade you set aside before combining with the uncooked salmon.

In my opinion, ours didn’t actually need more flavor, after finishing the searing with a bit of extra marinade in the final minutes of cooking. Our eight year old did request a bit of extra soy sauce . He loves this recipe, one reason we have it so much. When you get an eight year old gobbling up something this healthy and easy to make, you’re going to be cooking it a lot!

Sure, we’ve love to say everything here on Cooking Chat comes out perfectly all the time. But I’m a home cook, making food in the real world. So sometimes, stuff happens.

As I mentioned, I first learned this method for pan searing salmon from a Barbara Lynch recipe. Chef Barbara emphasizes the importance of getting the skillet very hot before adding the salmon, skin side down.

When the salmon gets cooked for 4 minutes as indicated in the instructions, you can typically flip the salmon with the skin in tact. But we have had issues where the salmon skin starts smoking enough to set off our sensitive smoke alarms. Speaking of sensitive, our pair of 5 pound toy poodles start going crazy when the smoke alarms are blaring, and it is not a good situation!

Thus, these days I have to be a bit cautious on how high and for how long I sear the salmon before flipping the fish. The result is that sometimes the skin sticks to the pan.

I typically have a 2nd pan ready in case the skin does stick. Then you can just flip the salmon to the new pan to finish cooking, and leave the skin to clean up later.

What to Serve with this Recipe

The most recent time I made this recipe, I served it with quinoa, onions and peppers. That is a nice combo, and doubles down on the healthiness with the healthy grain!

I’ve also served this salmon with a simple green salad, as you can see in some of the photos. Asian flavored noodles also make a good side dish.

We have tested this salmon recipe with red wine and white wine pairings. So depending on your mood and preference, you have choices! 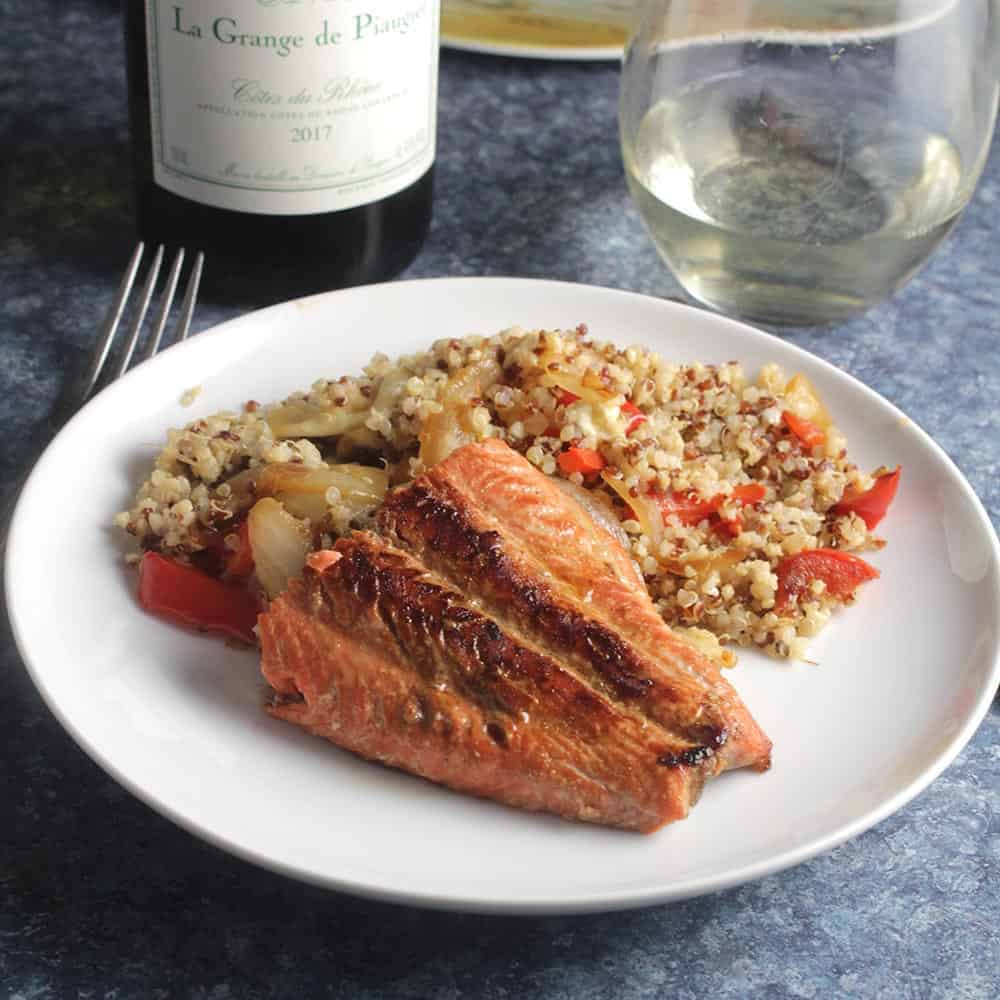 The Asian flavors of this salmon marinade do also make some white wines a viable option for pairing here. Unlike white fish, which tends to call for a lighter style white wine, salmon is a meaty fish requiring a more full bodied white wine for a good pairing.

With that in mind, I have often served this pan seared salmon with a Chardonnay. That can definitely work, and is course something pretty easy to find.

However, there are other full bodied white wine types that can work with this recipe if you are looking to try something different. A White Rhone blend can be a good option.

You may be more familiar with Rhone Valley red wines. If you haven’t tried a white Rhone yet, I’d encourage you to do so, especially if you are interested in alternatives to Chardonnay.

Roussanne, Marsanne, Clairette and Viogner are the white grapes I’ve come across most frequently from the Rhone. But there others, too, summarized here on the Rhone Rangers website.

To pair with our recent remake of this salmon recipe, I opened a white Rhone we get regularly. The 2017 La Grange de Piaugier Côtes du Rhône Blanc ($14) has a light scent of lemon on the nose. Peach fruit and a bit of citrus on the palate, with notes of minerality. Definitely a bottle I’d recommend with this pan seared salmon recipe, and it is relatively easy to find. But I’d definitely encourage you to try other white Rhones with the recipe, too.

Salmon just begs to be served with Pinot Noir; although there usually isn’t begging required to get me to open a bottle of Pinot. I usual go for wild salmon from Alaska, so it seems natural to stay in the Pacific Northwest. Again, not much arm twisting required to have me go for Oregon Pinot Noir. 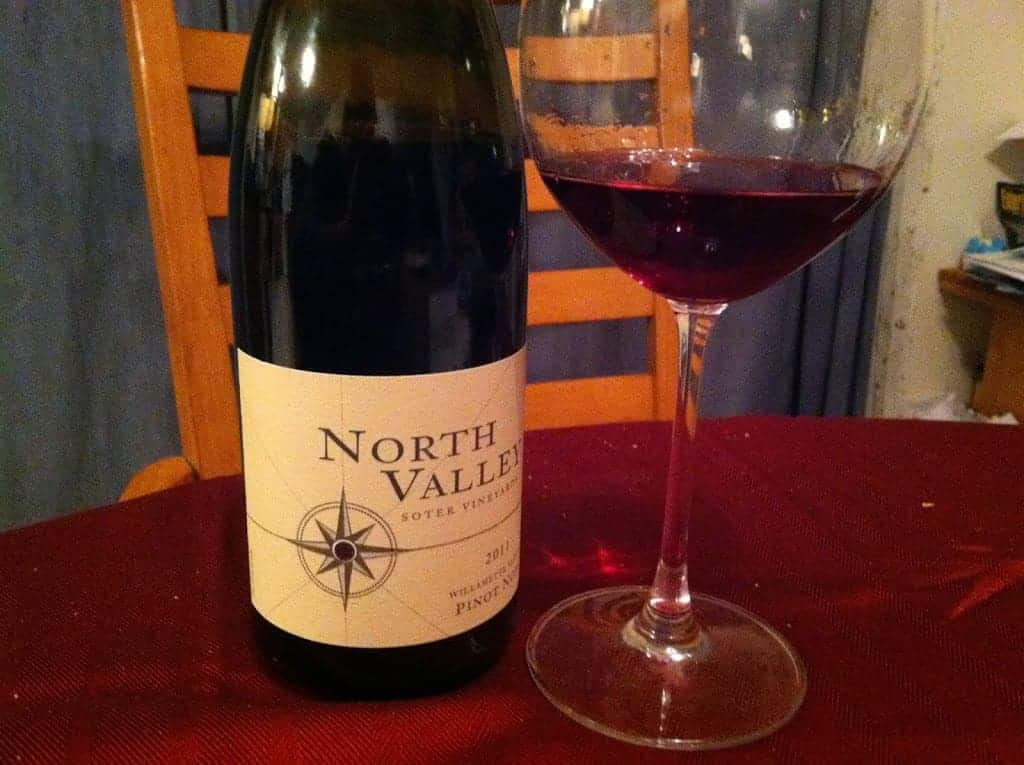 When making this recipe for a past update to the article, we enjoyed this dish with a bottle of 2011 Soter North Valley Pinot Noir from the Willamette Valley. Definitely a very good wine and nice pairing. This recipe can easily by made on a busy weeknight, but this Pinot is more a weekend type wine by our standards! (don’t recall exact price, $30ish I believe). We often grab the Bouchard & Fils Pinot from France or the Hahn Pinot from California when looking for a Pinot to enjoy with salmon midweek.

I will pair salmon with Pinot regardless of the fish preparation; but salmon and Pinot is an especially good pairing with the salmon is prepared with mushrooms. See this Salmon Farro and Mushrooms recipe paired with an Oregon Pinot Noir for an example of this delicious combo. 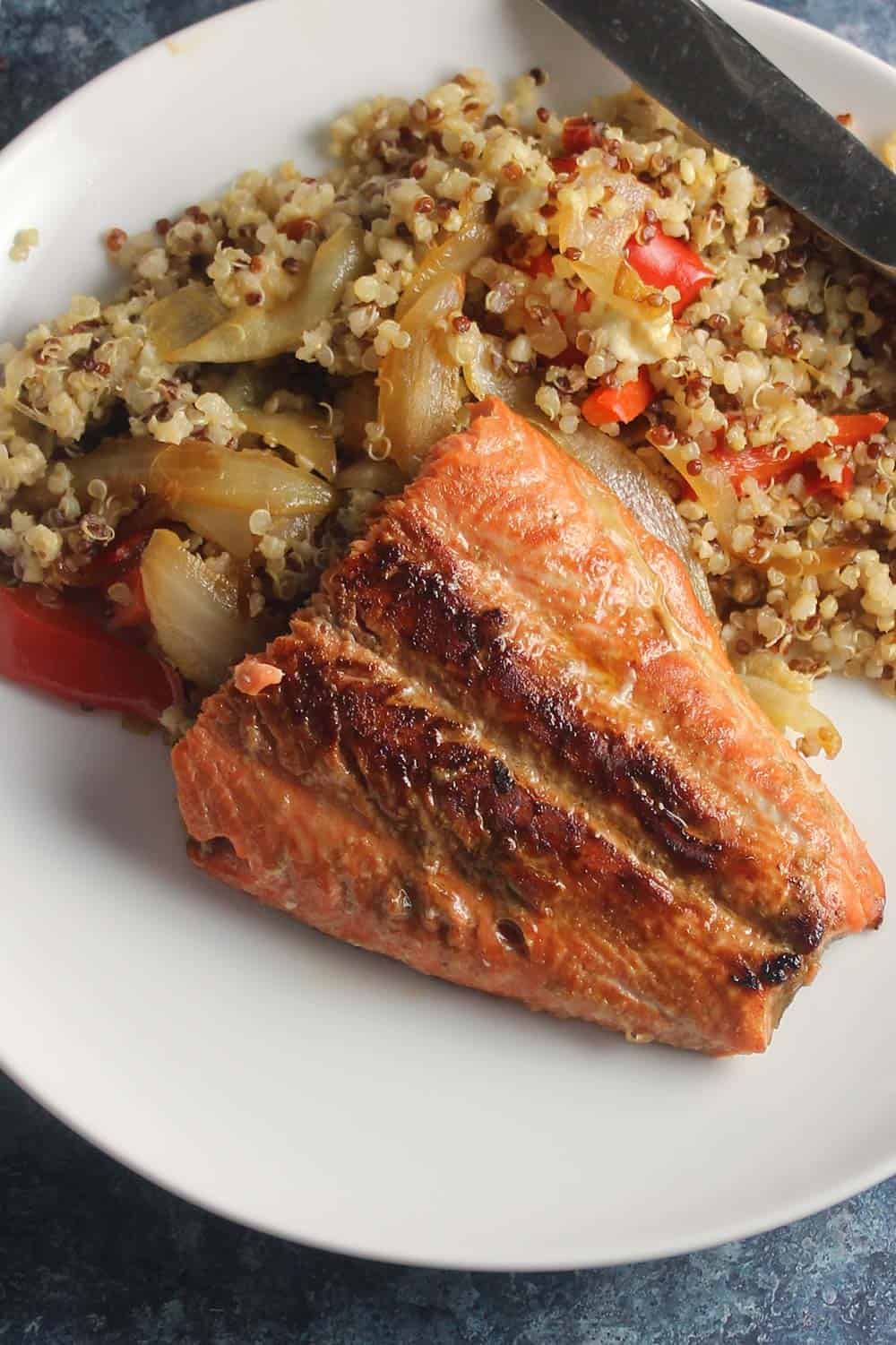