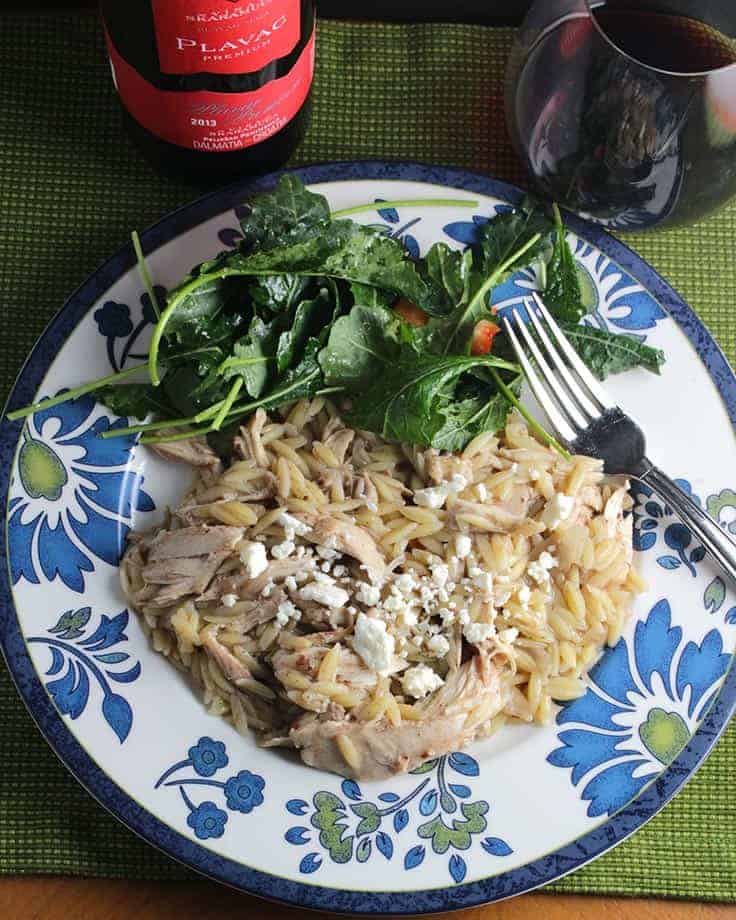 Our theme for the January Wine Pairing Weekend is “Celebrate the New Year with Something New”, hosted by Culinary Adventures with Camilla. I had the wine picked out for this early, when I sampled some Croatian wine I really liked, back in December. I decided to go with something new in the food department, too, bringing you this Middle Eastern Chicken Orzo recipe.

Seeing as I started my plans for this meal with the wine, I’ll talk more about that first, then move to the Middle Eastern Chicken Orzo. When I first sampled the 2013 Vina Skaramuga Plavac Mali  ($16, 13% ABV), I was very pleasantly surprised to find out it was well under $20, given the quality of the wine. The wine is medium bodied, violets on the nose, and nice cherry fruit. It also has a little spice in there, which Jodi identified as clove. That clove note stuck in my mind, eventually leading to the pairing with the Middle Eastern Chicken Orzo. I also get a little touch of chocolate on the finish, which no one is going to complain about!

A few weeks ago Dee, co-owner the fine wine wholesale company Cafe Europa, was pouring the wine I picked along with others from her native Croatia. So it was a great chance to learn some new things about a country with some great wine that most of us in the US know little about. Plavac Mali is a wine grape varietal native to the coastal regions of Croatia. It has some similarities to Zinfandel. Dee mentioned the Plavac Mali is often enjoyed in Croatia with grilled fish, so I suspected it would also work well with a chicken dish. 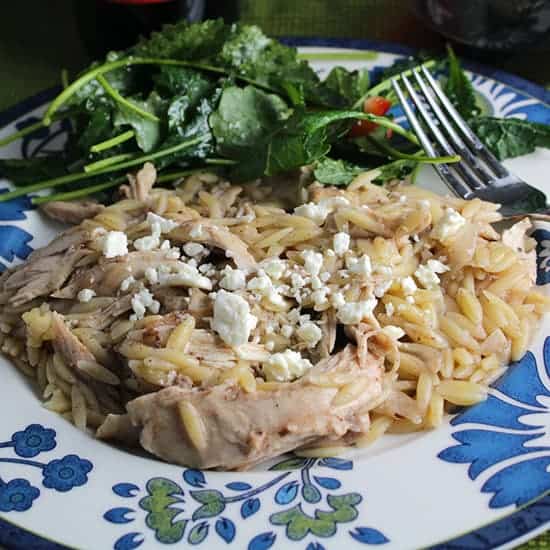 I mentioned this Middle Eastern Chicken Orzo recipe is based largely on the one found in the cookbook. I’ve increased and tweaked the quantities a bit, added the feta cheese and made a few other edits based on the version I cooked. 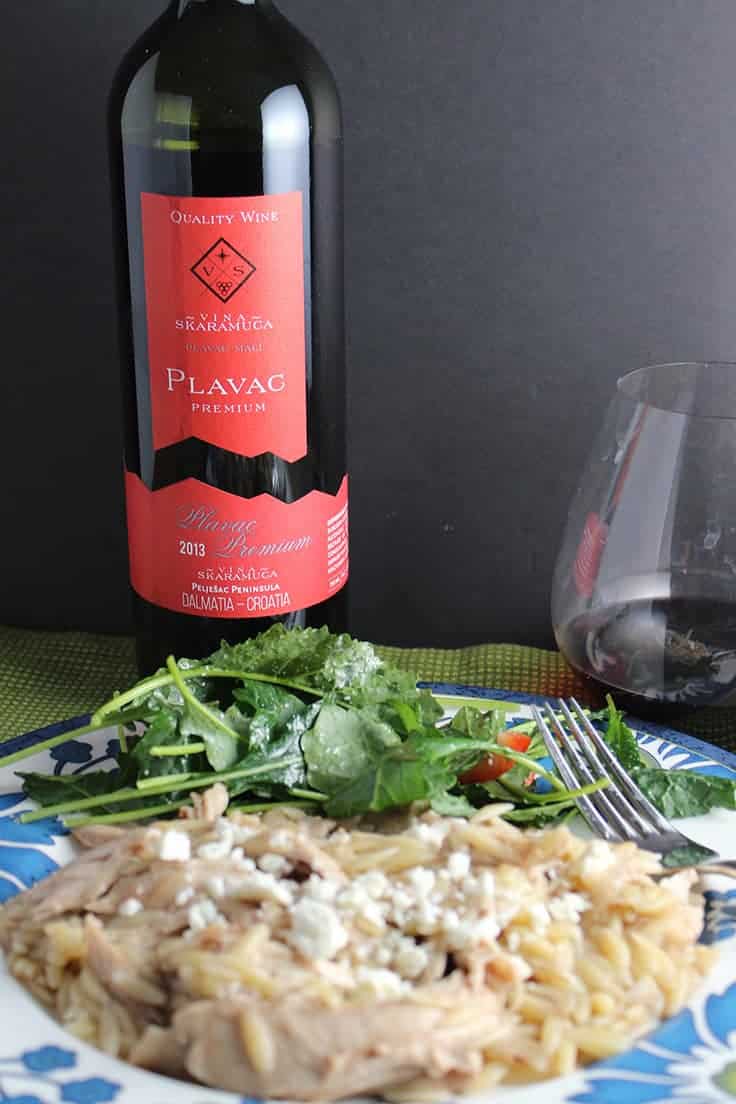 I’ve given you my brief tasting notes, but how did the Plavac Mali pair with the Middle Eastern Chicken Orzo? As suspected, it was a very good pairing! The clove we picked up in the wine married well with the cinnamon in the dish. This is a lot of cinnamon, by the way. This made the dish a hit with our ten year old!

The medium bodied wine has fairly low alcohol for a red, so it is definitely good for drinking along with a lighter dish like this chicken and orzo. I will definitely have to try a seafood pairing with it soon–if the wine is still available. This Plavac Mali and the other Croatian gems Dee pour at Pairings Wine and Food in December were flying off the shelves! I got half a case, but was down to the last one for this recipe after bringing other bottles along to various holiday gatherings.

Altogether, this food and wine pairing is a great reminder of the benefits of trying something new! We enjoyed a new recipe from a cuisine I don’t cook very often along with a wine that is an excellent value because it comes from an area and grape American consumers haven’t discovered…yet! 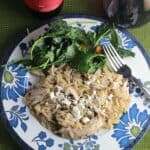 Chicken slowly simmers in a Middle Eastern spice blend of cinnamon and cardamom and then gets served with a flavorful orzo.

Be sure to check out all the new pairings from my fellow #winePW bloggers! These are listed alphabetically by post title and I’m excited to see new vintners, new countries, and wines from Turkey, Croatia, and even Lebanon.

These are listed alphabetically by post title and I’m excited to see new vintners, new countries, and wines from Turkey, Croatia, and even Lebanon.

Join our live Twitter chat on Saturday, January 9, from 11 a.m. to noon, Eastern Time. Just tune into the hashtag #winePW. If you’ve come to us after January 9, consider joining us for #winePW on February 13, focused on a Valentine’s Day theme, hosted by Christy at Confessions of a Culinary Diva. You can get a full listing of past and upcoming Wine Pairing Weekend events here.