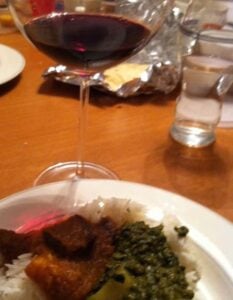 Somehow, a post I wrote 6 years ago on pairing wine with Indian food remains one of the most visited on this blog. Clearly the subject is of interest to folks! However, that post only featured white wines because that has always been my default option with the spices of Indian food. I’ve seen quite a few people suggest red wines can go with Indian as well, but my limited experimenting with such pairings have led to a clash of tastes on my palate, such as with the red blend I mention in this post.

I don’t give up easily. So when  Neill Dahill was sampling the 2009 Apaltagua Reserva Carmenere at Pairings  and suggested it could be a  red wine pairing for Indian food, I was all ears. He hadn’t actually tried it, but thought it had a hint of cumin spice that would match Indian food well. I was a bit skeptical but curious to try it. And at $13 a bottle, why not?

The wine was pretty tight when I first poured it–there was a strong woodiness that dominated. But I decanted it just briefly, and it opened up with blackberry fruit along with a bit of spice and oak. The oak seemed to give it structure to stand up to the beef curry we had, and the spice and fruit in the wine’s taste blended fairly harmoniously with the flavors of the food. We had aloo palak (potatoes in a creamy spinach sauce) along with the beef; as you might suspect, the Carmenere tasted better with the beef.

I would not call this a perfect pairing per se, but definitely a pretty good match that I’d try again. So I’m happy to report that I have finally have enjoyed a red wine paired with Indian food! I’ll have to experiment a bit more with this. Have you found a red wine you enjoy with Indian food?