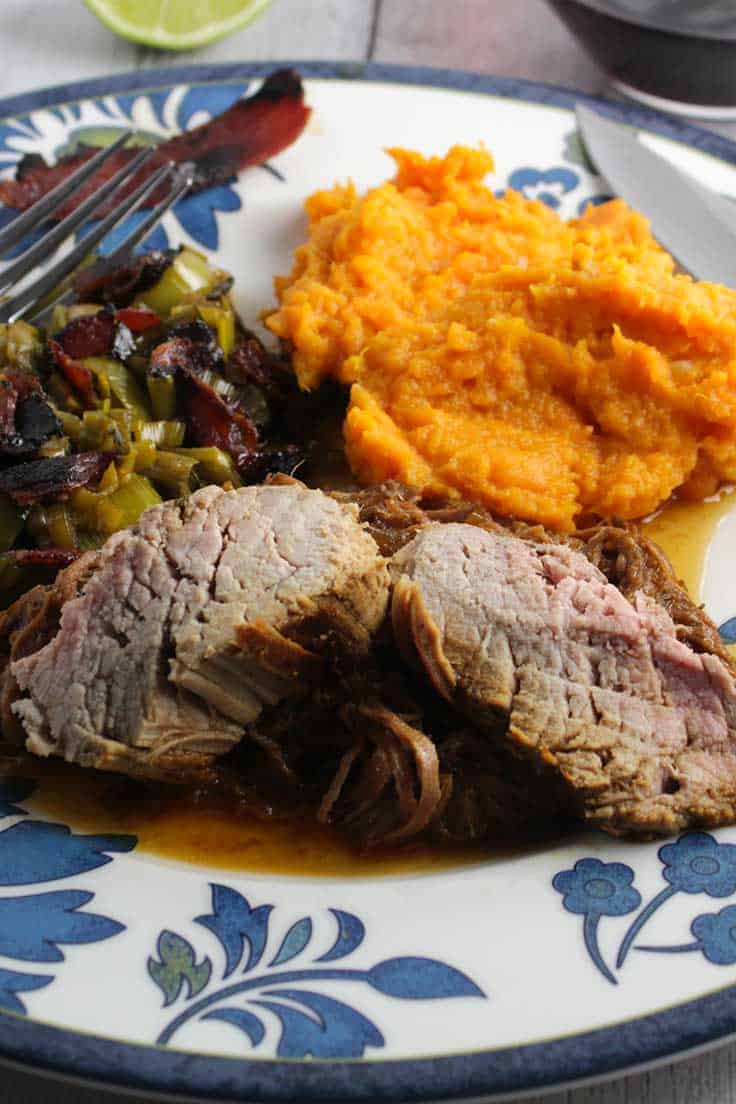 We like pork here, so Pork Three Ways sounded like a pretty genius idea. I have to credit our 10 year old sous chef for this one. Somehow I was talking to B about different types of pork, and Pork Three Ways came up in the conversation. B latched onto the idea with great enthusiasm, and I promised to come up with this  meal.

Roasted Pork Tenderloin seemed like a good centerpiece for this project. The pork tenderloin recipe below is my go to way to prepare pork tenderloin, marinated with garlic and cilantro and roasted to juicy perfection.

Bacon naturally had to be featured here; the inclusion of bacon was certainly no small part of why B was very eager for me to make this. For the bacon portion of the meal, I came up with a delicious Sautéed Leek Greens with Bacon, which drew rave reviews from all who tried it. You’ll want to save those leek tops next time you have leeks so that you can make this recipe! 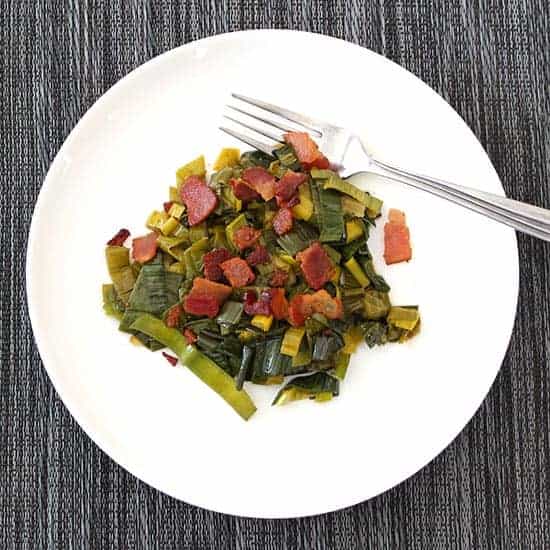 The third piece of this meal is a savory Slow Cooker Pulled Pork, full of flavor. Everything on the plate was so good but the pulled pork might have been my favorite. That might be because it was the first time I made my own pulled pork and really liked the way it came out. The pork tenderloin was tender and juicy, but I have made this a lot and expected it to be good.

But of course, this pork recipe is about the way all this pork goodness comes together. Juicy pork pork tenderloin, served with savory pulled pork and a side of tasty and salty bacon and leek tops. 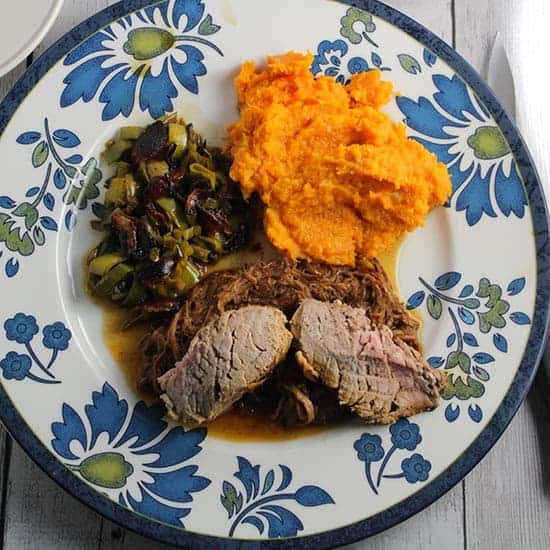 This recipe does take a bit of planning. As the name implies, the Slow Cooker Pulled Pork takes the longest of the three elements of the meal to prepare. If you want to serve Pork Three Ways for supper on Sunday, for instance, get the Slow Cooker Pulled Pork marinade going Saturday evening. Marinate overnight, then get the pork going in the slow cooker Sunday morning, and then it cooks as you go about your day.

In the mid to late afternoon, make the marinade for the pork tenderloin, following the recipe below. Then in the early evening, finish the pulled pork, and keep it warm in the slow cooker as you do the other steps.

Start crisping up the bacon for the Sautéed Leek Greens with Bacon when you finish with the pulled pork. This is a good time to preheat the oven for the pork tenderloin, and take the tenderloin out of the fridge.

Get the leek greens sautéing next…strictly speaking, it is a braising method to cook those leek tops, takes a good 20 minutes or so. So when the leeks are well underway is a good time to put the pork tenderloin in the oven.

To serve this dish, first plate some Slow Cooker Pulled Pork, then place a couple slices of the pork tenderloin on top of the pulled pork. Next, plate the Sautéed Leek Greens with Bacon alongside the pulled pork and tenderloin. You are ready for a Pork Three Ways Feast! We rounded out our plate with one of my favorite side dishes, Sweet Potatoes with Cumin Sage Butter. Yum! 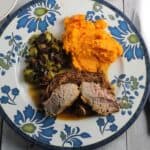 Pork tenderloin marinated with cilantro and garlic gets roasted to tender perfection. This pork tenderloin recipe can be served as part of a Pork Three Ways dinner, or enjoyed on its own.