Today we share about the summer party food pairings we tried with a very good bottle of Rias Baixas Albariño. Read on to learn more about this Spanish wine region and some of the pairings we enjoyed. Disclosure: The wine discussed in this post was provided as a complimentary sample. 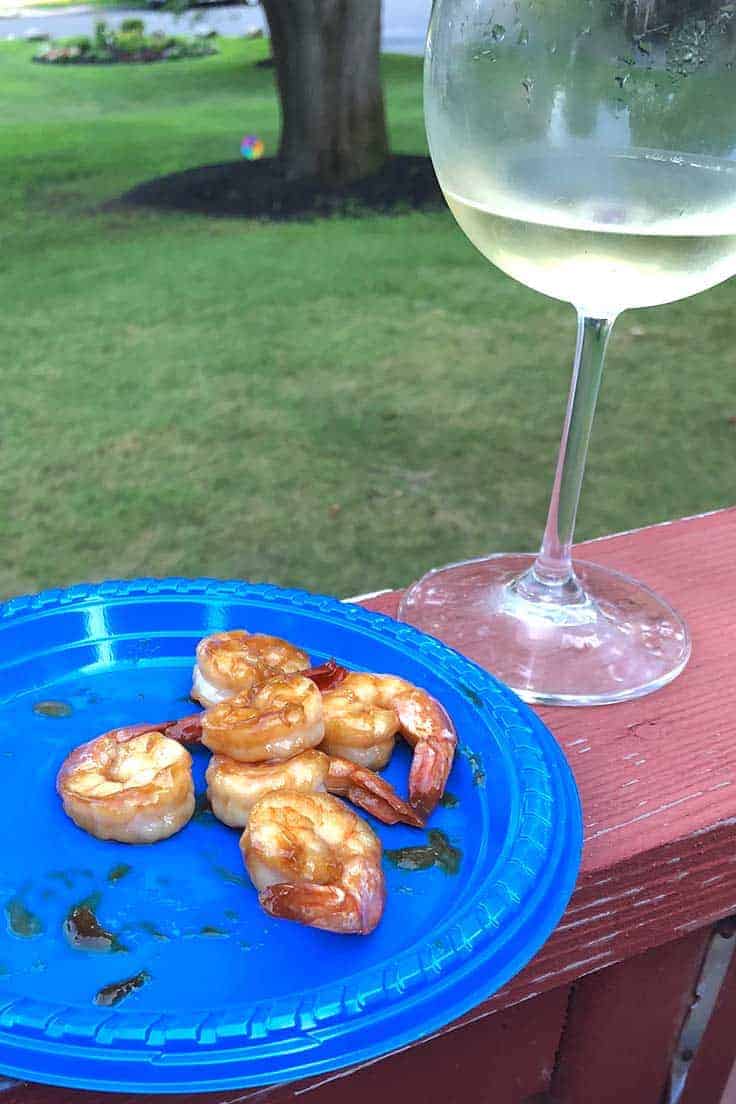 The “Crisp Whites from Spain and Portugal” Wine Pairing Weekend theme was perfectly timed! We’ve been in the midst of a hot, humid stretch of weather that makes me think we’d moved to the South. But New England has its share of the dog days, too. So crisp white wines hit the spot here! Thanks to Culinary Adventures with Camilla for hosting!

We’ve had plenty of weather here to opening the Rias Baixas Albariño we had waiting in the wings for this #winePW. With baseball games on the calendar almost every night, I realized I wasn’t going to have to to cook a special dish designed to pair with the Albariño. Instead, I thought I’d open this up to sample along with a variety of appetizers being served at the start of a recent summer birthday party.

Before I get into the details of the Rias Baixas Albariño, lets learn more about this delicious Spanish white wine.

Rias Baixas means “Lower Rias”, referring to the four estuaries in this region of Galicia on the Northwestern coast of Spain. The area is comprised of five distinct sub-regions: Ribeira do Ulla, Val do Salnés, Soutomaior, Condado do Tea and O Rosal. The Albariño we samples is from Val do Salnés, the region known as the birthplace of Albariño.

While 12 grapes are allowed in the Rias Baixas DO, 96% of the wine produced is from the Albariño grape. The Rias Baixax Wines website, a good source for more information on the region, explains about how the grape is grown in the region:

Vines are traditionally widely spaced and trained on stone pergolas hewn of the same granite as the soils below. To counter the region’s rainfall and humidity, most vines are trained on a wire trellis called a “parra” anchored by granite posts.

Yields are low in the region, and the grapes are delivered to the winery as quickly as possible to avoid oxidation. You can definitely taste that freshness when you pour a glass of Rias Baixas Albariño! 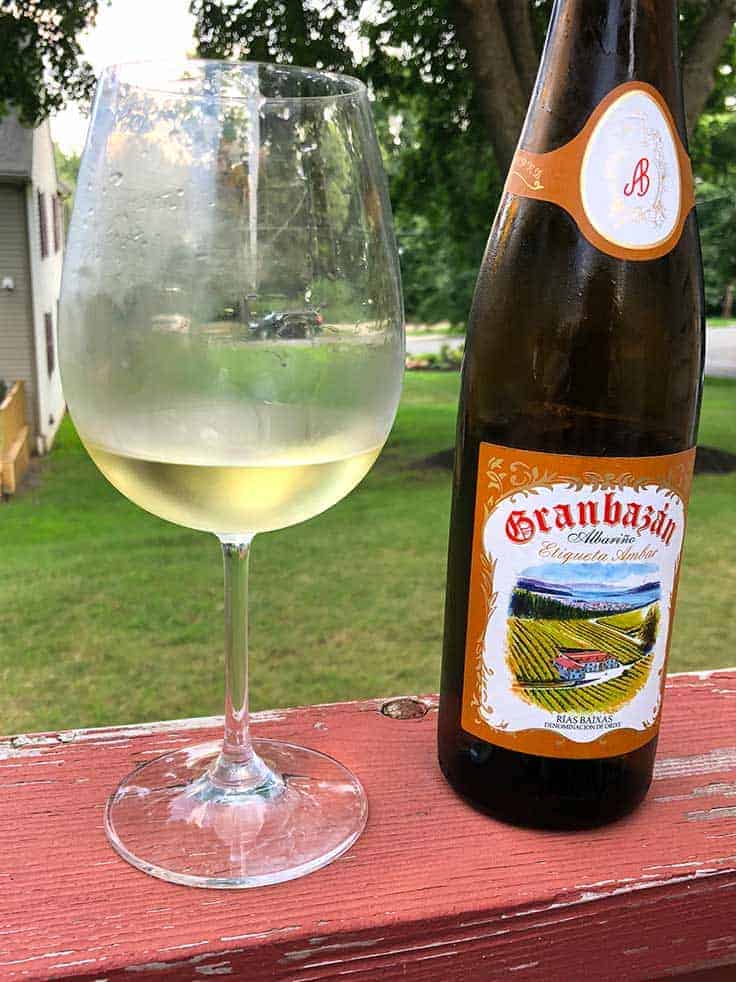 We got to try the Granbazan Etiqueta Ambar Rias Baixas Albariño (13% ABV) for this event. The Etiqueta Ambar is the signature wine from Granbazan, made from the oldest vines on the estate.

I got honey on the nose of this Albariño, and it was very refreshing as expected. Melon and ripe pear fruit on the palate, with notable minerality.

I wasn’t going to do much cooking coming back from a baseball doubleheader with temps in the mid 90s. We started by nibbling on some foods brought by guests, with no expectation that the items were going to be tested out with Albariño.

The Rias Baixas Albariño paired quite well with the Trader Joe’s Garlic Dip, served with pita chips. The crispness of the Albariño and the ripe fruit seemed to offset the garlic flavor.

I also put out some olives to try with the wine, having read that salty dishes work well with  Albariño. I give the olives with Rias Baixas Albariño a thumbs up! Looking back in the photo reminds me I also had a bit of Serrano ham available, which also was complimented nicely by the Albariño. 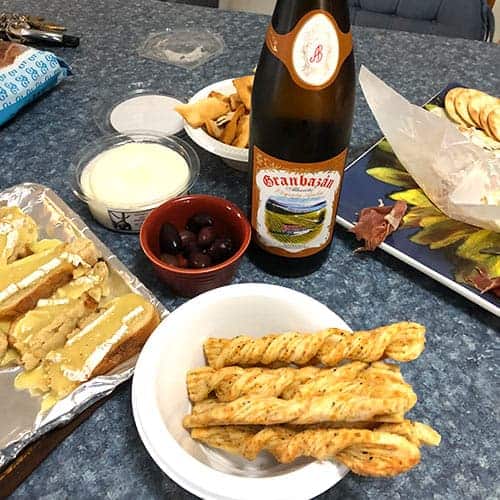 As you might expect, the Albariño wasn’t a great match for the melted Camembert cheese toasts. Tasty app though!

I got the grill fired up to serve some kielbasa sausage. Rias Baixas Albariño isn’t what I’d think of to pair with sausage, but it matched up pretty well the the meaty flavors and the mustard.

Not surprisingly, the Rias Baixas Albariño paired the best with the Easy Sautéed Shrimp I made per request of the birthday boy. Our newly minted teen wasn’t thinking about the wine pairing aspect of the shrimp, but I knew this was bound to be a good match. The minerality and crispness of the Albariño is a perfect partner for shellfish. Further enhancing the pairing is the saltiness of the soy marinade I use for the shrimp.

Our experimenting with Rias Baixas Albariño paired with summer party nibbles reinforces that proven pairing of Albariño and shellfish, but also demonstrates that Albariño is a versatile wine that can go with many other foods you might not initially consider.

So the next time you are hosting a gathering, especially in the warm weather, consider opening an Albariño to enjoy as you get the party started!

I’ve enjoyed other Rias Baixas Albariño but this was my first chance to try a wine from Granbazan. The winery is owned by Manuel Otero and nephew Jesus Alvarez.

Granbazan is located in Tremoedo, 3 kilometers from the sea. The vineyards are in the heart of the Salnes valley subzone of Rias Baixas, an area known for producing fresh, mineral-driven Albariño. The winery has 17 hectares of estate vineyards, producing half a million bottles per year, all of it made from Albariño grapes.

More about Crisp Whites from Spain and Portugal

Be sure to read more about crisp whites from Spain and Portugal from my fellow Wine Pairing Weekend bloggers!

Be sure to check out all the great Wine Pairing Weekend Articles about Crisp Whites from Spain and Portugal! And join us for a live Twitter chat on the topic, using hashtag #winePW, at 11 a.m. ET and 8 am PT on Saturday, August 11, 2018. You can view past and upcoming Wine Pairing Weekend events here.