This Mushroom and Short Rib Ragu pasta recipe features a hearty, long simmering sauce that gets topped with a bit of dark chocolate. Perfect with a bold, red Italian wine from a producer that carefully tends the land. 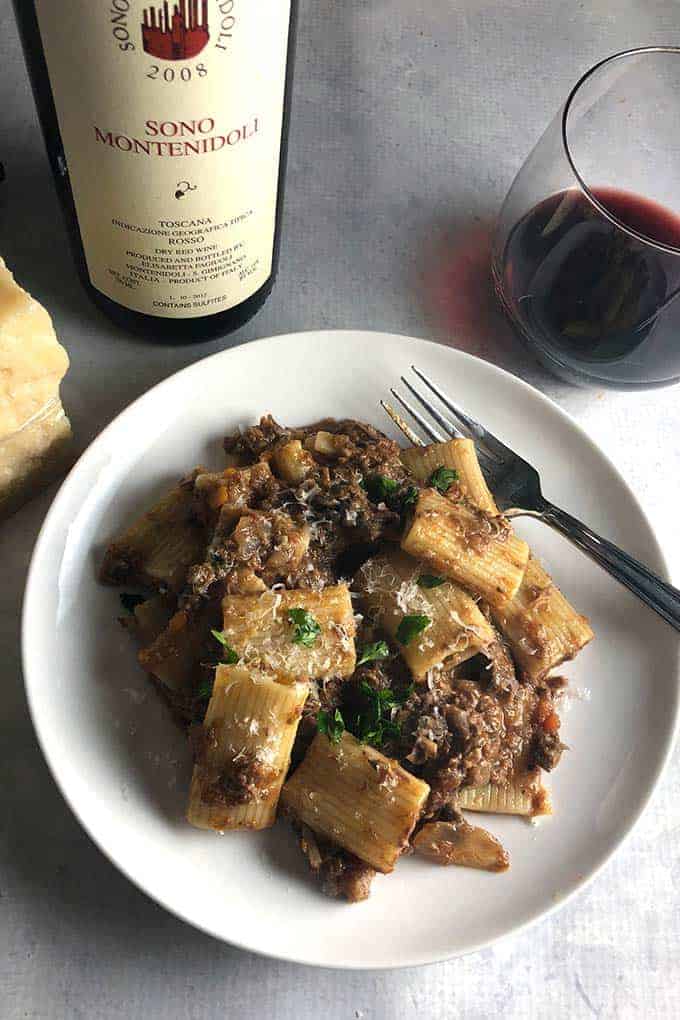 This Mushroom and Short Rib Ragu recipe definitely started with the wine!

We enjoy observing Open That Bottle Night the last Saturday in February each year — backstory on the OTBN in this article. The 2008 Sono Montenidoli had been lying patiently on the bottom row of our wine rack for a year or two.

When I first tasted the 2008 Sono Montenidoli a couple of years back, this was one of those powerful wines that you’d better try sitting down lest you be knocked off your feet. And that was after the wine shop owner noted he’d opened the bottle early that day. The Sono is 100% Sangiovese from the San Gimignano area of Tuscany.

Today the Italian Food, Wine and Travel is exploring Italian viticulture, hosted by Gwendolyn at Wine Predator. From what I know about Elisabetta, the passionate venerable winemaker behind the wines of Montenidoli, I was pretty sure this winery would fit nicely into this #ItalianFWT event. A friend who visited Montenidoli confirmed that the farm “organically plus”, so I decided to jump into today’s event. 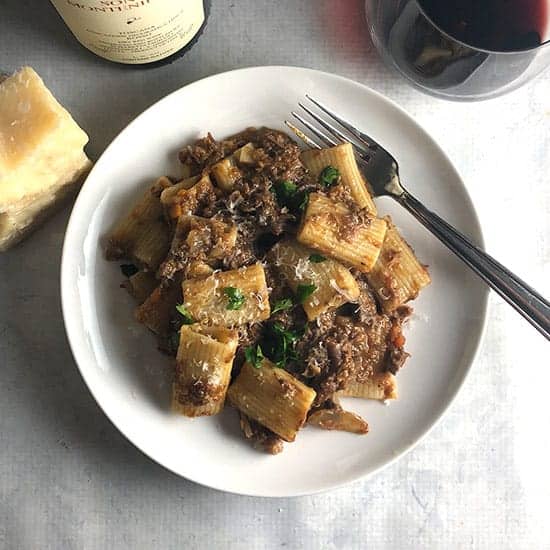 The Sono Montenidoli is a wine that deserves some effort for the accompanying meal. Clearly a meaty dish was in order — mountain goat is among the pairing suggestions on the winery website!

Not quite up for tracking down a mountain goat, I recalled a short rib ragu I had made a few times based on a recipe from Everyday Pasta by Giada De Laurentiis. This meaty dish with a bit of tomato and topped with a touch of chocolate seemed like a good pairing for the Sono Montenidoli.

What is Short Rib Ragu?

Ragu is an Italian meat-based sauced that typically has a small amount of tomato in the sauce. Short rib ragu features beef short ribs as the meat used. The recipe would typically also include pancetta, but we did a variation on that theme.

For another delicious ragu recipe, try our Lamb Ragu Pasta. And if short ribs is your thing, try our Slow Cooker Short Ribs with Mushrooms.

This Short Rib Ragu recipe largely follows Giada’s recipe. I started the sauce by sautéing some baby bella mushrooms, instead of the pancetta called for by Giada. 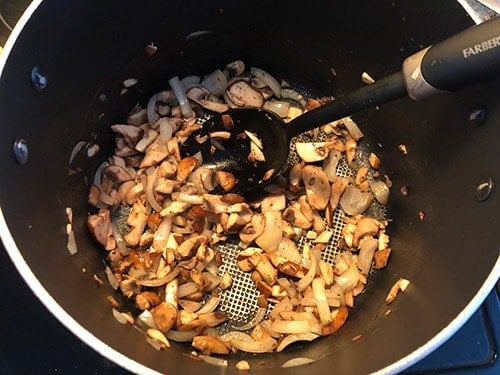 I’m looking to limit how often we eat cured meat products, and have found mushrooms can be a good alternative for providing depth of flavor to a recipe.

The recipe card below gives detailed instructions that I won’t repeat here. Two points I would highlight here:

Slow cooking: Although the total cooking time here is over three hours, the short ribs are simmering for most of that time needing just an occasional stir. So you do need to be around the kitchen, but you can certainly be doing other things as the sauce simmers. 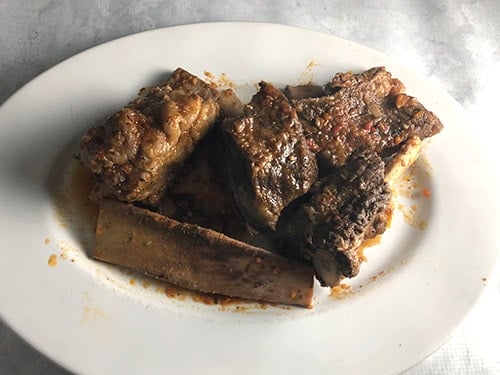 Shredding the meat: Unlike pulled pork or chicken which comes apart easily after long simmering or braising, you will need to use a food processor for the short rib meat. But do what you can to break some of the meat into bite sized pieces on the platter first. Short ribs are a fatty cut, so some fat along with the meat is OK. But cutting off and discarding some of the large chunks of fat before shredding is a good idea.

Giada’s recipe recommends tagliatelle pasta for the short rib ragu. For this batch of sauce, I made it with rigatoni. I like the short, substantial shape for meaty dishes. 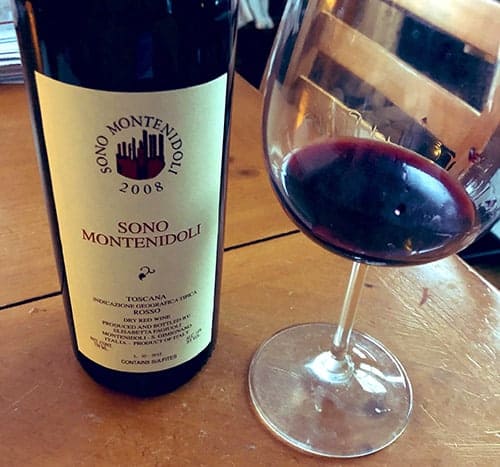 Let’s get back to the wine! I opened the 2008 Sono Montenidoli ($64*, 14% ABV) about 3 hours before dinner time. My intent was to do a little taste of it, in part to determine how long I would need to decant it. Here are my tasting notes:

Nose: Aroma of a forest floor on a warm summer day.

While the Sono Montenidoli still benefited from some time to open up before dinner, it had really evolved and softened during the time it spent in our cellar. I actually decided not to decant the wine, just let it stay open for three hours. By dinner time, the fruit was very plush and the tannins had softened further. A complex wine, with spice notes also there along with that bacon and maple.

I wouldn’t think of having the younger Sono Montenidoli without food. But at this point, it is a definitely a pleasure to sip on its own with the complex flavor profile. However, as you might suspect with an Italian red wine, it is even better when enjoyed with a meaty pasta dish like the short rib ragu!

*Pricing note: Average price according to Vivino. I bought the bottle for a good bit less when Elisbetta was visiting Pairings Wine & Food. 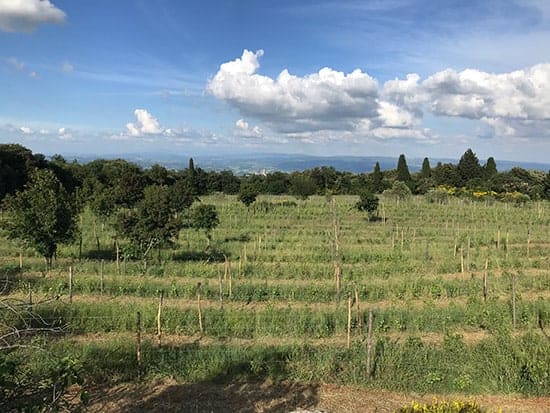 The following background information comes from the Montenidoli website, and what I’ve heard from Elisabetta and friends that have visited there. I previously shared some of this information along with our Tuscan Kale Pasta recipe, paired with a Montenidoli Vernaccia.

The San Gimignano hills where the Montenidoli Winery was established had been abandoned by farmers in the early 1900s. The land has a long history of winemaking dating back to the Etruscans.

Elisabetta Fagiuoli and her husband Sergio moved there in 1965 to raise their family. Sergio was a teacher, but caring for the land was in Elisabetta’s blood. Her family cultivated vines and olive trees outside Verona. Much of her childhood was spent wandering the vineyards of Valpolicella. 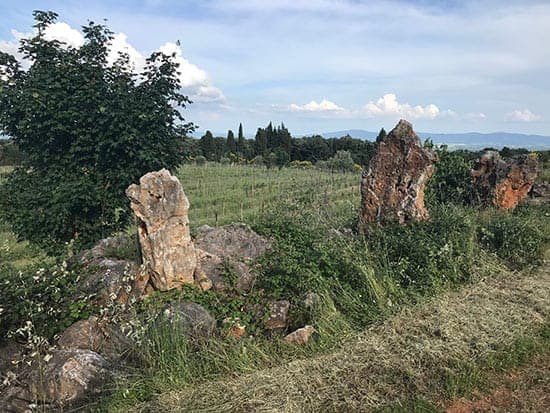 The vineyards were overgrown with brambles when they arrived, but Elisabetta set to work. As my friends Ray and Lori said upon visiting Montenidoli, Elisabetta is “a force of nature”. Using organic methods that rely upon the Tuscan sun and soil, the first Montenidoli wine was born in 1971. Well past the age most people retire, Elisabetta continues to work with a small team to tend to the vines. 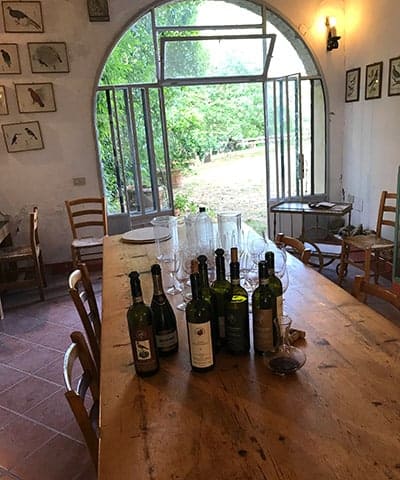 Montenidoli consists of 24 hectares of vineyards surrounded by 200 hectares of woodlands.

To make the Sono Montenidoli, the best bunches of Sangiovese are vinified separately, with a long maceration on the skins. The wine is matured in new barriques, and bottled unfiltered.

I haven’t had a chance to visit Montenidoli, but my friend John did last year and shared some photos. 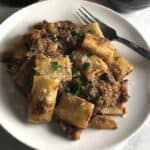 Mushroom and short ribs slowly simmer for a rich ragu sauce that is topped with a bit of dark chocolate. Pair with a full-bodied Italian red wine.

Other Italian Food Wine & Travel Writers Thoughts on Viticulture in Italy
If you see this post soon enough, please join our conversation on Twitter at #ItalianFWT on Saturday March 2 at 11am EST. We love visitors to join in the chat!

Pin to save this recipe! 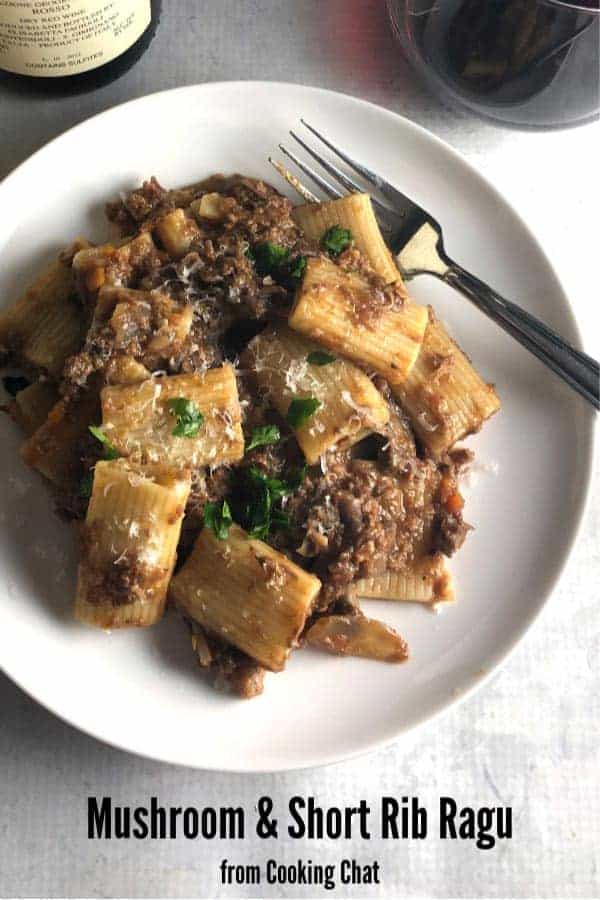