Easy Indian Roasted Cauliflower recipe makes a tasty side dish for Indian entrees, and can also spice up other meals as a flavor vegetable dish. Be sure to check out the accompanying recipe video! 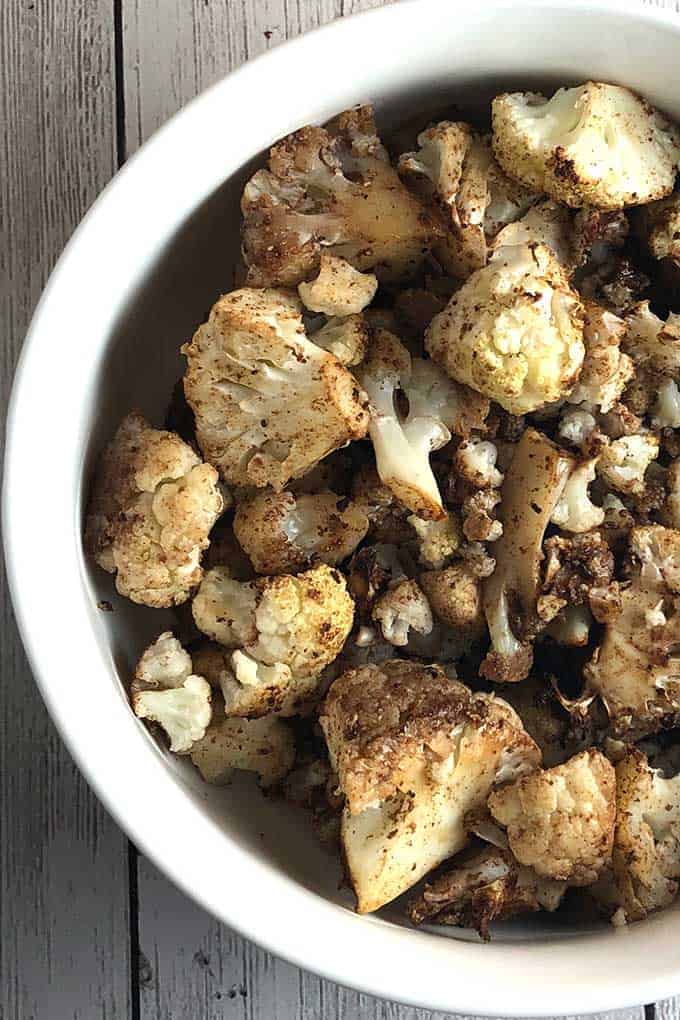 One of my cooking priorities for this year is to put more focus on the vegetable side dishes. I tend to default to same handful of sides — various salads, steamed broccoli or green beans, most typically.

Today we are sharing our easy recipe for Indian Roasted Cauliflower with Garam Masala. Cauliflower doesn’t have a lot of flavor on its own, but it soaks in the the complex flavors of garam masala very nicely.

I first made this when I was making a new Indian butter chicken recipe. I didn’t want to try to do a second complicated Indian vegetable recipe, so thought I would simply toss some cauliflower with garam masala and roast it. We really liked the flavor, and so a tasty new addition to our veggie side rotation was born!

For another tasty side for Indian food, try our Butternut Squash Chickpea Curry!

What is Garam Masala?

Garam masala is an Indian spice blend that has a lot of variations. Most versions will include coriander, cumin, clovers, cinnamon, nutmeg and black pepper.

Garam means “hot” and masala means “spices” so it translates to hot spices. But the versions I’ve used are typically more flavorful than hot. The Spruce Eats has a recipe and tips if you’d like to try to make your own. Here’s an Amazon affiliate link to the brand of garam masala I’ve been using lately.

We base our recipe on a small head of cauliflower, which we chopped to just over two cups. You could easily do 1.5 times this recipe with a larger head, or double it if you have enough cauliflower. Just a few things to keep in mind for this easy recipe:

As I mentioned, I first made this Indian roasted cauliflower to go with butter chicken; I will be posting that recipe soon! 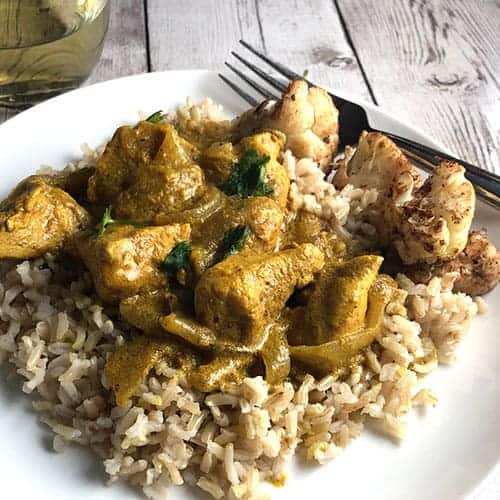 Meanwhile, it would also be nice alongside our Easy Baked Tandoori Chicken.

If you want to have a fusion plate, we actually enjoyed the Indian Roasted Cauliflower with kale pesto linguine. The combo worked nicely! Two flavorful dishes in their own way. We went for an Italian wine with that fusion plate — the 2017 Rizieri Arvia Arneis ($20, 13.5% ABV). This Arneis from the Langhe region in Italy’s Piedmont has citrus on the nose, pear fruit and almond notes on the palate. It went especially well with the kale pesto, but good with the cauliflower, too.

When serving the Indian Roasted Cauliflower with a full Indian meal, a Gewurztraminer is my go-to option. A good Gewurzt has a bit of spice along with some residual sugar, making a perfect Indian pairing. The Becker Gewurztraminer from Alsace is a good one that I’ve had lately. 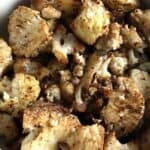 Easy Indian Roasted Cauliflower recipe makes a tasty side dish for Indian entrees, and can also spice up other meals as a flavor vegetable dish.