This easy Ham and Cheese Pasta Bake recipe is a great way to use leftover ham! Just a few ingredients is all you need for this savory leftover ham pasta bake. This easy recipe can be on the table in 30 minutes! We enjoyed this dish with a good Chardonnay.

A big baked ham makes a great centerpiece for a holiday meal or other family dinner. You want to make sure there is enough for everyone, and that invariably means there will be some leftover ham.

So what to do with that leftover ham? This Easy Ham and Cheese Pasta Bake is a great choice! You can have this savory, cheesy ham casserole dish on the table in 30 minutes.

This recipe is also flexible. You can add in extra vegetables that you might have on hand, and use the amount of ham you have available. In the recipe card, we note a variety of optional ingredients and potential swaps.

Now, let’s touch upon of few of the other ingredients, along with some notes about possible substitutions.

Here’s a visual overview with some tips for making our easy ham and cheese pasta bake. Head on down to the recipe card for all the details!

Trim away any large pieces of fat from the edges — see bonus tip below on how to use that extra fat!

Add the sliced onions to a large skillet with a tablespoon of olive oil. Cook for about 10 minutes, until the onions begin to caramelize.

Cook the pasta al dente (still a bit of firmness) while the onion cooks. Drain and toss with a tablespoon of olive oil when cooked.

Add the leftover ham pieces to the skillet along with the cooking wine, and stir to combine with the caramelized onion.

Let the ham heat for a few minutes with the onions to let the flavors meld.

Stir the cooked pasta into the skillet along with a cup of the shredded cheese, plus the cream and broccoli, if using.

Top the ham and pasta mixture with the remaining cheese and breadcrumbs.

As you can see in the photo above, our large skillet was definitely quite full after stirring in the pasta. You could definitely combing the ham mixture, pasta and cheese in a casserole dish if that works better for your equipment. That would also be a good option if you want to make a bit more pasta.

Once you have the ham and pasta combined with the cheese, cover the skillet or casserole dish and move to the oven. Bake for 10 minutes covered, then another 5 minutes uncovered.

You can finish it with a couple minutes of browning on the broil setting if you like.

Scoop out a serving onto your plate, and enjoy!

Here’s an extra step you can take to add some additional flavor to this ham pasta bake, while using up more of the leftover ham.

Cook the ham fat until it begins to brown, about 5 minutes. You will notice it will start to look and smell like bacon!

Remove the browned ham fat from the skillet with a slotted spoon. This will leave behind some good flavor from the ham fat. If you like, you can cut some of the brown fat into small bits, and add it back in along with the pasta.

We love making good use of leftovers! Here are a few more of our favorite ways to re-purpose one night’s meal for another tasty dinner.

Chardonnay immediately jumped to mind to match the ham and cheese pasta bake. I trusted my instincts, and opened a bottle of the 2020 House of Brown California Chardonnay ($20, 13%).

I get baking spices on the nose of this Chardonnay. Meyer lemon and stone fruit — peach I’d say — on the palate. A flavorful and well-balanced wine. Definitely worked nicely with the leftover ham pasta bake.

A rosé could also work with this dish — we tested that with some of the leftovers. Perhaps a Pinot Noir if you are in the mood for a red wine.

I first heard of House of Brown when I hosted a Wine Pairing Weekend BIPOC wineries event earlier this year. House of Brown is the second label of Brown Estate, Napa Valley’s first Black-owned estate winery.

Bassett and Marcela Brown bought an abandoned ranch in eastern Napa Valley. They initially planted grapes for other wineries; then their children began producing estate wines. They are particularly known for Zinfandel. As a Zin fan, I definitely need to be on the lookout for a chance to try theirs!

I got the House of Brown from The Urban Grape, a Black owned wine shop in Boston that features a BIPOC producers collection. Wines can be ordered and shipped from them throughout the US, as of this writing. 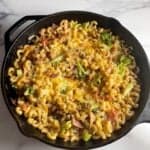 This Easy Ham and Cheese Pasta Bake recipe is a great way to use leftover ham! Just a few ingredients is all you need for the savory leftover ham pasta bake.