This easy London Broil Steak recipe is quickly roasted just right and topped with savory mushrooms for a delicious steak dinner. We paired our steak with a Châteauneuf-du-Pape wine from M. Chapoutier. Full disclosure: The wine was provided as a complimentary sample by the winery. 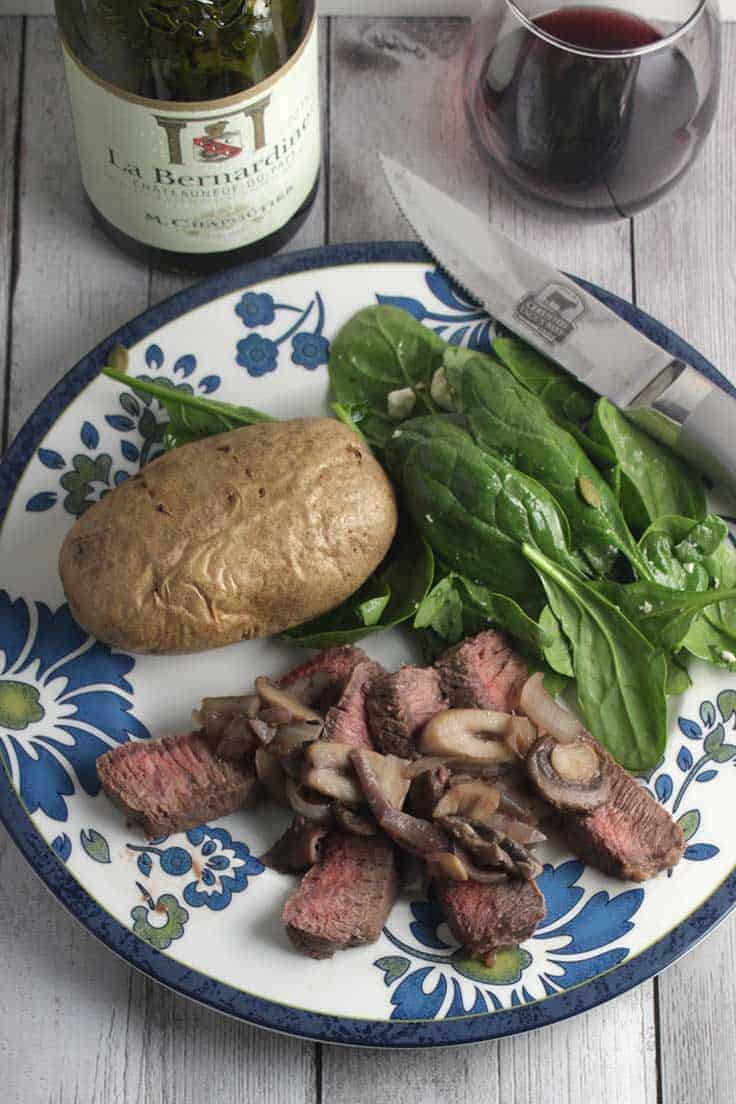 This month the French Winophiles blogging group is exploring wine from the Rhone. A number of us had the opportunity to enjoy three samples from M. Chapoutier, one of the top producers of Rhone wine.

Picking food to serve with Châteauneuf-du-Pape

Châteauneuf-du-Pape is a big, bold red wine, so you don’t want to mess around with lighter foods like chicken or seafood, generally speaking. (there’s an exception to most every wine pairing rule though!)

Pork tenderloin crossed my mind, but then I thought that might get overwhelmed by the wine. Then I saw top loin was on sale at Whole Foods, marketed as London broil. I decided to make London broil steak with mushroom sauce to go with our Châteauneuf-du-Pape. Stay tuned for details on the pairing, which follow a few notes about our London broil steak recipe. 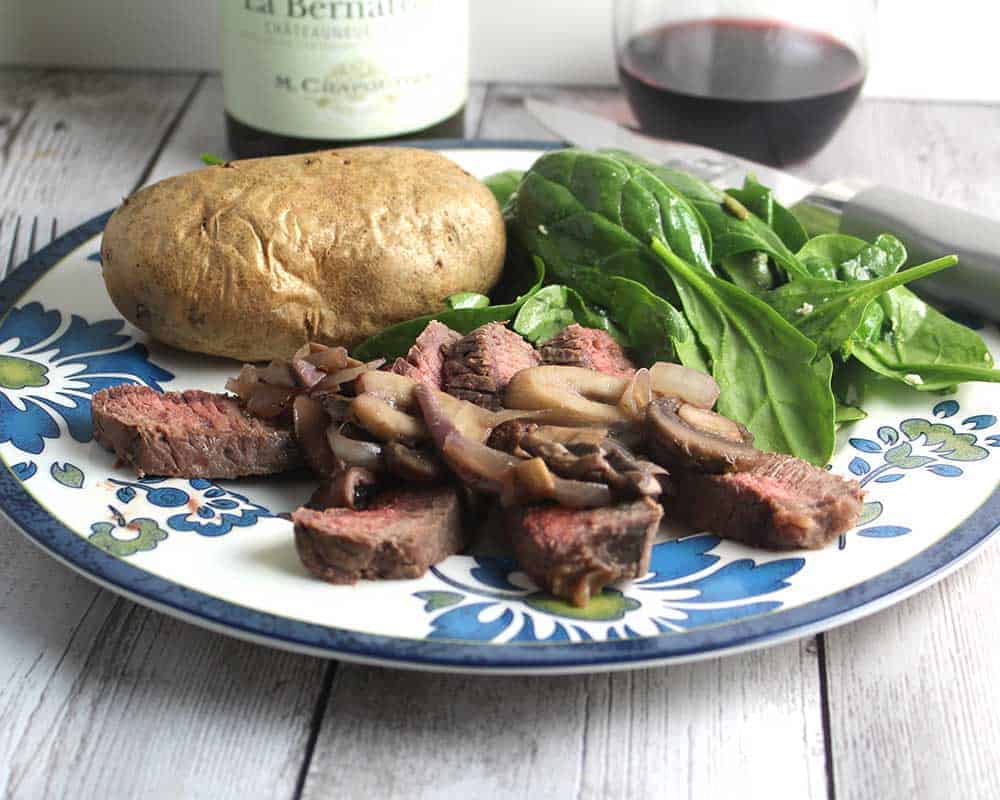 Before I leave the topic of what food to serve with Châteauneuf-du-Pape, many articles I checked out in planning for this pairing noted the Syrah in Châteauneuf-du-Pape makes it work with spicier foods. Lamb tagine is one idea that caught my eye, which I am definitely going to have to try!

Beef pairings for Châteauneuf-du-Pape such as this Chanterelle Beef Stew recipe I made previously, have worked well. So I had a good feeling about our London broil steak! 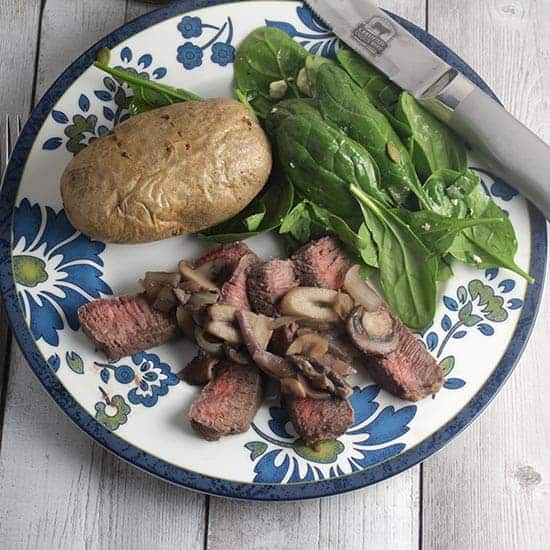 First, what is London broil steak, anyway? It refers to a preparation as opposed to a cut of steak. Top loin steak is typically the cut used for London broil, and that’s the way I rolled. At Whole Foods they list this cut as London broil / top loin, I think that is fairly typical.

Why is it called London broil? I haven’t really figured that out, but don’t go looking for London broil in London. It’s a name that got cooked up here in America at some point.

What you do need to know about London broil / top loin is that it is a lean, relatively inexpensive cut of meat. While a marinade is a typical strategy for producing tender meat from this cut, my reading suggested the acidity from many marinades can be offputting with this cut.

So I decided I would make rub for our London broil steak, with a generous amount of salt to tenderize the meat. After letting the steak sit in the rub at room temperature for a half an hour, it gets quickly pan seared on the stove top prior to roasting in the oven. 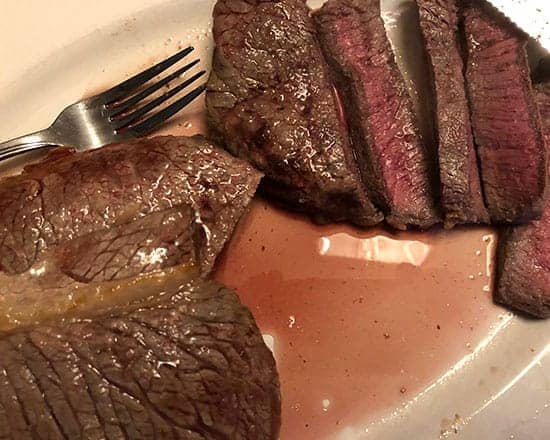 Mind you, this is a quick roast in the oven! You don’t want to overcook lean London broil steak or it will be dry and tough. Check at 12 minutes or even a bit sooner for medium rare. 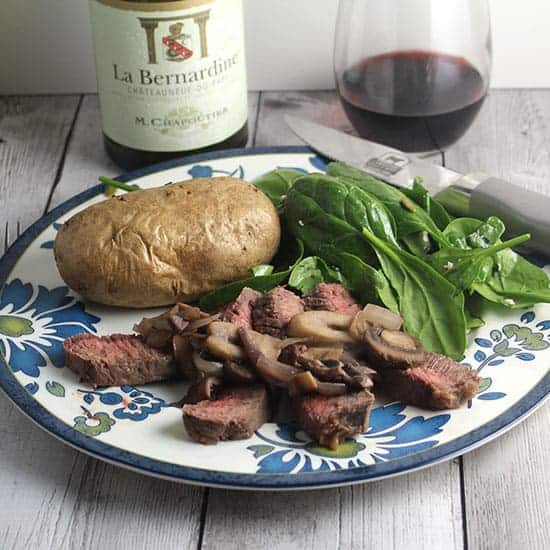 So as noted, we had a bottle of 2015 Châteauneuf-du-Pape “La Bernardine” Rouge ($60, 14.5% ABV) to open to pair with our London Broil Steak. I get scent of forest floor on the nose with a touch of menthol. I noted the thickness of the wine when first tasting it, with big blackberry fruit. Definitely a young wine with some potential to age.

The Châteauneuf-du-Pape opened nicely after some brief decanting while finishing making our London broil steak. As suspected, this big, fruit forward red wine was a very good pairing for the steak. Some of the more subtle aspects of the wine started to show as we ate, notes of roasted coffee, spice and licorice along with the fruit. Those more complex taste elements worked nicely with the mushroom. I definitely give this pairing a solid A!

Châteauneuf-du-Pape is an appellation that allows up to 13 grape varieties in the red wine blends, with several of those being white wine grapes. I’ve had some CDP that use all the allowable grapes, and that is interesting. But M. Chapoutier goes in a different direction, using just one to three of the allowable grapes in La Bernardine in order to allow for true expression of the terroir to come through in the wine. The 2015 La Bernardine is comprised of 90% Grenache and 10% Syrah. 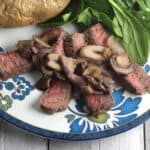 This easy London broil steak recipe is quickly roasted just right and topped with savory mushrooms for a delicious and affordable steak dinner.

For the mushroom sauce

Check out these other posts from The French #Winophiles on the wines of the Rhône Valley and Michel Chapoutier, and join us Saturday morning, March 17 at 11 a.m. ET on Twitter. Just use #Winophiles – it’s really fun! 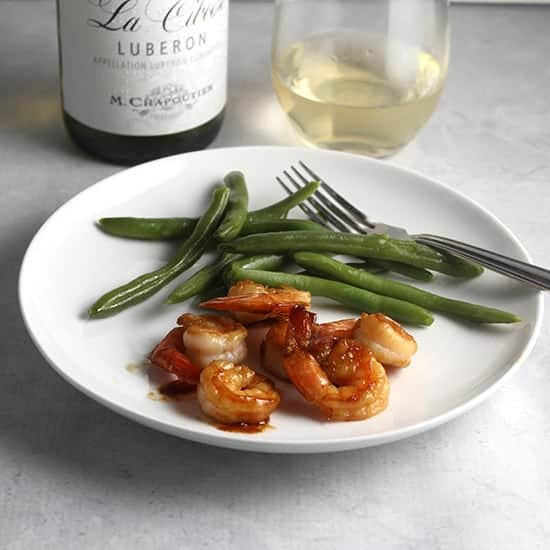 As I mentioned, we had three bottles from M. Chapoutier to sample. We enjoyed the  2016 Luberon “La Ciboise” Blanc ($16, 13% ABV) with our Easy Sautéed Shrimp.

Not officially part of this event, but we have also enjoyed Bila-Haut rosé with Grilled Halibut and Mango Salsa. Maybe pin this to save for grilling season? 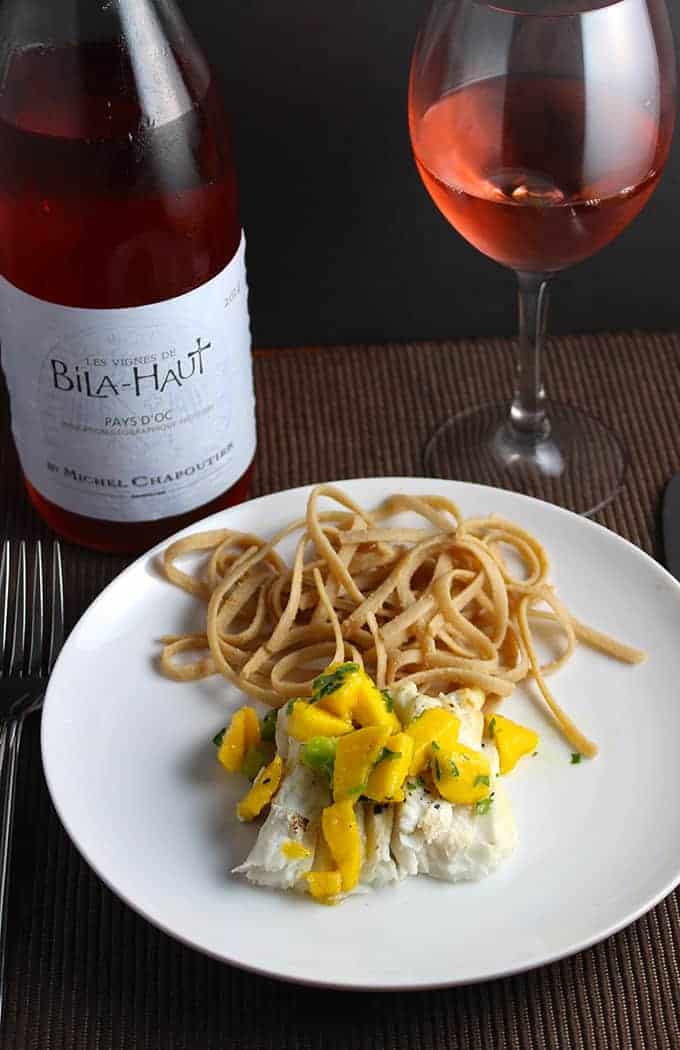