Pan Seared Sea Bass finished with a simple, flavorful pan sauce for an easy meal. The recipe pairs wonderfully with a Rias Baixas Albariño. Disclosure: The wines discussed in this article were provided as complimentary samples.

Today I’m joining the World Wine Travel group for a visit to the Galicia region on the northwest coast of Spain. If you missed our last stop, check out my Steak Picado recipe, which was paired with a wine from the Ribera del Duero region.

We had a chance to sample Albariño from Rias Baixas. This white wine is an excellent pairing for seafood, so I figured it was a good time to share my Pan Seared Sea Bass recipe.

What makes the recipe work

The sea bass cooks quickly in the skillet — about 5 minutes does the trick!

After the fish gets just cooked through, you remove it from the skillet with a spatula. You’re going to have some bits of the fish and skin, if applicable, stuck to the pan. Perfect! You’ve got a start on the sauce.

Previously I’ve made a sauce for sea bass that simply used butter, parsley and lemon. To give it more a Spanish flavor, in keeping with our virtual visit to Spain, I added green olives, roasted piquillo peppers, and a bit of paprika. Definitely makes this dish an easy winner!

Choosing sea bass for this recipe

Sea bass are small fish living in the Atlantic ocean. I use fairly thin sea bass fillets for this recipe. I’ve gotten them from my local meat / fish share as well as from the freezer section at Whole Foods.

I have used the basic cooking method in this recipe, with a slightly different sauce, for both black sea bass and striped bass. So either of those two fish could be used in this recipe, as well as a basic sea bass.

Chilean sea bass is another kind of fish entirely. Prior to a clever rebranding, Chilean sea bass went by the not very appealing name Patagonia toothfish. I have not prepared Chilean sea bass. Because it is a different type of fish, I wouldn’t recommend using it for this recipe. If it’s a Chilean sea bass you are looking to cook, perhaps try this Lime Crusted Chilean Sea Bass from Chef Dennis.

If you like this sea bass recipe, we have some more ideas for you! A combination of some other good seafood recipes (including one paired with an Albariño!) and Spanish recipes, keeping with our theme.

A Visit to Rias Baixas

The folks at Gregory + Vine did a great job putting together a virtual visit to the Rias Baixas region. Complete with a suitcase, and virtual bus tour led by Spanish wine guru Rick Fisher, we got an excellent feel for the beautiful scenery and friendly people of the region.

Rias Baixas translates to “lower estuaries” or “rivers”. The name is fitting, as you can see from the map with its finger like land formations interwoven with the estuaries.

Denomination of Origin (D.O.) Rías Baixas is renowned for the Albariño grape, which produces excellent white wines. Some 99% of wine production in Rias Baixas is white, and 96% is Albariño. Other whites are sometimes blended in small proportions to round out the flavors of Albariño. Visit the Rias Baixas wines website for more information on the region.

As I mentioned, we had a chance to sample three Rias Baixas Albariño. This included the Martin Codax Albariño, probably the most well known and easiest to find producer of Albariño. This is definitely a solid choice any time you are perusing a wine list or shop shelves looking for a good white wine.

We also sampled the Robaliño Albariño, which I found to be very crisp and light. It reminded me of a Vinho Verde.

While we enjoyed all three wines we tried, I decided to focus on the Fillaboa Albariño (13% ABV) for our pairing.

I found this wine to have a bit more weight and complexity than the other two, which I thought would work with our sea bass and the sauce I was preparing. The wine spends time on lees before bottling, which probably explains the difference I was tasting.

The Fillaboa has citrus fruits on the nose. Well-structured with some delicacy, bright fruit with notes of green apple, minerality and good acidity on the palate. We definitely recommend it as a pairing for our pan seared sea bass! But definitely try other Rias Baixas Albariño with the recipe if that’s what you have available.

Many of the wineries in Riax Baixas source their fruit from local growers, but Fillaboa grows their own grapes for their wines. 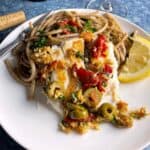