Home » Stew » White Bean Stew with Sausage and a Rioja

This easy and richly flavored white bean stew with chorizo sausage gets its inspiration from La Rioja region of Spain. Beans simmer with sausage, onions, swiss chard and garlic, plus some paprika and saffron. Finished with olives, roasted pepper and Manchego cheese. Delicious paired with a Rioja red wine. Our contribution for today’s #WorldWineTravel event.

Today marks the beginning of our 2021 virtual tour around Spain with the World Wine Travel group. Once a month, we will visit a Spanish wine region and share article about its food and wine.

Today we start with La Rioja — thanks to Jeff from foodwineclick for hosting this event! [update: after Rioja, we visited Catalonia, and featured Mushroom Fricassee with a Red Wine from Priorat]

Rioja is a province in the northern part of Spain, bounded by the Ebro Valley in the north, and the Iberian range in the south. Well-known for its wine, I needed to do a little research to figure out what to cook with a bottle of Rioja!

As this article notes, food from Rioja tends to be simple. The ingredients and style of food in this small region tend to be influenced by nearby regions. This landlocked region includes plenty of meat in its cuisine, especially pork as well as lamb and beef. Despite not having a coast, there is also ample seafood, such as cod.

Chorizo sausage is a mainstay of cooking in the region, featured in Patatas a la Riojana (potatoes cooked with sausage and smoked paprika) as well as white bean stew such as we cooked up today.

I enjoy learning about a region’s food, including common ingredients, and coming up with my own recipe that will pair well with the area’s wine. That is the way we came up with our recipe for Spanish White Bean Stew with Sausage.

White bean stew is mentioned frequently in researching Rioja’s food. The dish typically includes white beans, bacon and chorizo and/or some other pork meat. We skipped the bacon and used a modest amount of chorizo, to make it a bit healthier.

Chard came up as a common vegetable in Rioja, so I decided to add some of the healthy green. And yes, as I was conceiving the dish, it did start to sound a bit like our Portuguese Kale Soup! One of our most popular recipes, with good reason.

One resource I’ve been looking at as we plan for this tour around Spain is the Easy Spanish Cookbook by Norema Salinas. Has some good basic info on Spanish cooking and each recipe suggests a Spanish wine pairing!

Tips for making this recipe

Get the full details for making this delicious white bean stew in the recipe card below. Here are a few of our tips to highlight:

Slow simmer, finishing flair: The overall key to the deliciousness factor of this stew is that we let the ingredients slowly simmer together for a good hour or so. Technically the ingredients here don’t “need” that much time to cook, but letting them gradually simmer builds up the rich flavors. Then we add another layer of flavor by finishing the stew with some more Spanish ingredients — green olives, roasted red peppers, and Manchego cheese. OK, have you saved this recipe to make soon?

White beans are of course an important ingredient! I used two cans of cannellini beans; cook about 1 cup of dried beans before making the stew if you want to use them instead of canned. For another recipe using white beans, check out our Spicy Chicken Sausage Pasta recipe.

Good quality sausages bring much of the flavor to this recipe. Chorizo sausages are most typical for the Rioja region. But I’ve used Andouille in place of chorizo in other recipes with success, if you wanted to try. I used traditional pork chorizo, but you could experiment with chicken or turkey.

Roasted Red Peppers I used basic roasted red bell peppers, but you could increase the authenticity by using piquillo peppers common to the region.

Prepping chard: Cut the thick stems of the chard away from the leafy greens. Chop the stems into small bits, and add the chopped stems about 5 minutes before the leaves. The stems get tender and barely noticeable, thickening the soup a bit while avoiding waste.

If this recipe suits your tastes, you might also enjoy these flavorful recipes and wine pairings from Cooking Chat!

There were about a half dozen bottles of Rioja to choose from at the local shop (Pairings), and a grabbed a bottle of the 2014 Barón Ladrón de Guevara Rioja Reserva ($23, 14.5% ABV). This Rioja is a blend of 95% Tempranillo and 5% Graciano grapes. It was aged for 24 months in French and American oak.

On the nose of this Rioja, I get rhododendron forest, rosemary and dark berries. On the palate, I get black cherry, a touch of coriander and bark notes. Well-structured tannins and a nice long finish. Pleasant to sip on its own, and a very good pairing for the Spanish White Bean Stew!

The primary way red Rioja wine gets categories is based on how long the wine ages in oak. I don’t have Rioja enough to have committed the different levels of Rioja to memory. I consulted the chart below from Wine Folly to refresh my memory.

So our bottle from Barón Ladrón de Guevara is close to the top of the classification system. A very good bottle for the price! 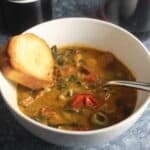 This easy and richly flavored white bean stew with chorizo sausage gets its inspiration from La Rioja region of Spain. Beans simmer with sausage, onions, swiss chard and garlic, plus some paprika and saffron. Finished with olives, roasted pepper and Manchego cheese.