This Steak Picado Recipe features top loin steak simmering with onion, peppers, tomatoes and more for a full-flavored Mexican beef recipe. We serve with a red wine from Spain’s Ribera del Duero region, as we join the World Wine Travel group for another stop in our tour around Spanish wine regions.

Today we share a steak picado recipe along with a red wine from Spain’s Ribera de Duero region. This is the 3rd stop in the World Wine Travel group’s virtual tour around Spain this year.

For our first two Spanish wine regions, we adapted recipes based on food from Spain. The Mushroom Fricassee and Spanish White Bean Stew were both delicious with Spanish wine! Our Pan Seared Sea Bass recipe is also inspired by Spanish cuisine.

Today we decided to try a Mexican recipe along with Spanish wine. Until recently, I didn’t realize Mexican wines were something to try, so often would go for a Spanish wine with the cuisine. Steak picado was on my list of recipes to make, so I decided to try it paired with Ribera del Duero.

I’m going to start by covering some information about the dish, then get into the wine. Use the navigation below if you want to jump right to the wine or the recipe instructions!

What makes this dish work?

Steak picado features the beef simmering with peppers, onions, tomatoes and more for plenty of flavor. So if you are looking for some steak flavor along with some spice, steak picado is a good recipe try!

The classic version of the dish is a relatively long simmering preparation. I figure that is because it was developed to use inexpensive cuts of beef. Based on some past recent experiments, I wanted to adapt the recipe to avoid overcooking the quicker cooking meats typically available in a U.S. supermarket.

So the good news is our steak picado recipe brings the same flavors of the classic dish, but is on your plate quicker!

Here are some tips about the ingredients you need:

What steak to use? I used top round steak, which is the cut typically used in London broil. This is a lean cut of steak, which had me on guard for overcooking it. Flank steak would probably be the most similar substitute. Picado recipes also sometimes call for sirloin steak. I haven’t tested any of these options yet, let me know if you do!

Jalapaño peppers bring some heat to the dish. I call for one jalapaño pepper, seeded. You could certainly try two jalapeños or maybe a serrano if you wanted to increase the heat. I tend to go for moderate heat, keeping mind our teen’s palate, not to mention the wine pairing. There is also chili powder in the ingredient list.

Tomatoes provide an important base for the picado steak sauce. Many recipes call for more tomatoes — a full can as opposed to one cup. I don’t use tomatoes a lot with steak so I wanted to go easy on them, but you can certainly increase that if you like.

What to serve with steak picado

We served our steak picado with black beans and a side of rice, following this Instant Pot Black Beans recipe from Well Plated. We added some allspice to lean into the Cuban flavors of the dish. I’d been way overdue for making beans in the Instant Pot; this recipe worked out well and I’ll definitely be making it again soon!

Warm tortillas are also a common option to serve with steak picado. You could also serve pinto peans instead of black beans if you like.

What to do with leftovers

You could simply save any steak leftover to make some tacos.But I wound up with a little amount of steak and a good amount of beans & rice leftover. No problem!

I mixed it altogether for a rice and beans combo with just a bit of meat. Have enjoyed it heated and plated like that, and also as a delicious burrito filling. Topped with a little Haitian pikliz for some more cultural fusion!

If you like this recipe, be sure to check out these other flavorful dishes from Cooking Chat!

We pairing our steak picado with the 2015 Quintana de Cue Crianza ($25, 14.5 % ABV) from the Ribera del Duero. I believe it is 100% Tempranillo, although in some places on the web it is referenced as a Tempranillo blend.

The wine has big herbal notes on the nose. Red berry fruit and good acidity on the palate. A powerful wine, and a good pairing for the steak. I would say this is a solid pairing.

The Bodega Valdrinal vineyards are among the highest in the Ribera del Duero.

Ribera del Duero is a well known Spanish wine region located in Castilla y Leon. The region is in Northern Spain, on a high plateau that is about 2,800 feet above sea level.

Tempranillo is the dominant grape in the region, accounting for 88% of the wine grapes, planted, according to this Wine Searcher article. Tempranillo must account for at least 75% of Ribera del Duero red wines.

The region has hot and dry summers with harsh winters. There is a large fluctuation between hot daytime temperatures and cooler nights during the wine growing season, always a good formula for good wine grapes! 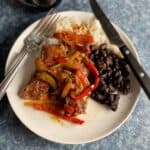 Be sure to check out the articles my colleagues have written about the Castilla y Leon region of Spain. If you catch this on time, join us for a twitter chat Saturday March 27 at 11 am EDT.