Ground Beef and Black Bean Enchiladas cooked with a delicious chipotle sauce, and topped with melted cheese. An easy and satisfying recipe! Gets even better paired with a very good red wine from Moldova (Disclosure: wine provided as a complimentary sample).

Enchiladas have been on my mind lately.

Well, enchiladas are a scrumptious combo of savory and spice, so that is one good reason. But on top of that, I’ve noted lately that my Wine for Enchiladas article gets some steady traffic, and I figured it could use some updated information.

I still had a couple of bottles of red wine to try for the upcoming Moldovan wine day. A Saperavi based Moldovan red had worked well with our Ground Beef Chili recipe, so I speculated a similar wine could work nicely with enchiladas. Spoiler alert: I was right!

It’s been quite some time since I made enchiladas. When I have made them at home, I’ve tended to follow a recipe from the Vegetarian Planet.

Given that I was looking to pair the enchiladas with a bold red wine, I figured some beef in the filling would help make it work.

Not sure how the cookbook’s author, Didi Emmons, would feel about combining her sauce with beef enchiladas. Maybe she’d be OK knowing I used a moderate amount of beef, with black beans included to provide additional substance and nutrition.

Anyway, the sauce is delicious, and works very well as a topping for our beef and black bean enchiladas! You could put this together with some store bought enchilada sauce, but the homemade version is worth the extra fifteen minutes or so if you can spare it.

Here are some of the key steps and tips for making these beef and bean enchiladas. Head down the recipe card for the full details, and play the video above for step by step photos.

As I mentioned, we had a bottle of wine from Moldova in mind to go with our beef and bean enchiladas. The wine was sent as a complimentary sample.

On the palate, blackberry fruit and some notable acidity. The wine tasted young, so I decanted for about 20 minutes while finishing the enchiladas.

The wine opened nicely upon decanting. While sipping it with the enchiladas, I got black pepper along with the fruit, which made for a nice pairing with the chipotle enchilada sauce.

The Saperavi based blend definitely had the heft to stand up to the beef in the enchiladas as well as the spices. Definitely a great pairing for the meal!

I’m not sure how widely available the Radacini Ampre is, but it appears you can order it via the Vinovations website.

If you don’t get ahold of this Moldovan wine, I would consider trying a Malbec or Zinfandel. 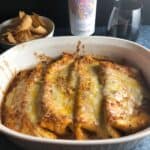 Ground Beef and Black Bean Enchiladas cooked with a delicious chipotle sauce, and topped with melted cheese. An easy and delicious recipe! Note: sauce adapted from a Vegetarian Planet recipe.