Today we share our delicious Brazilian Beans, Greens and Bacon skillet recipe, which we made to prepare with a Brazilian sparkling rosé wine from Salton Winery. The recipe is loosely based on the Brazilian dish Feijão Tropeiro. Disclosure: The sparkling rosé was provided as a complimentary sample by Wines of Brasil. 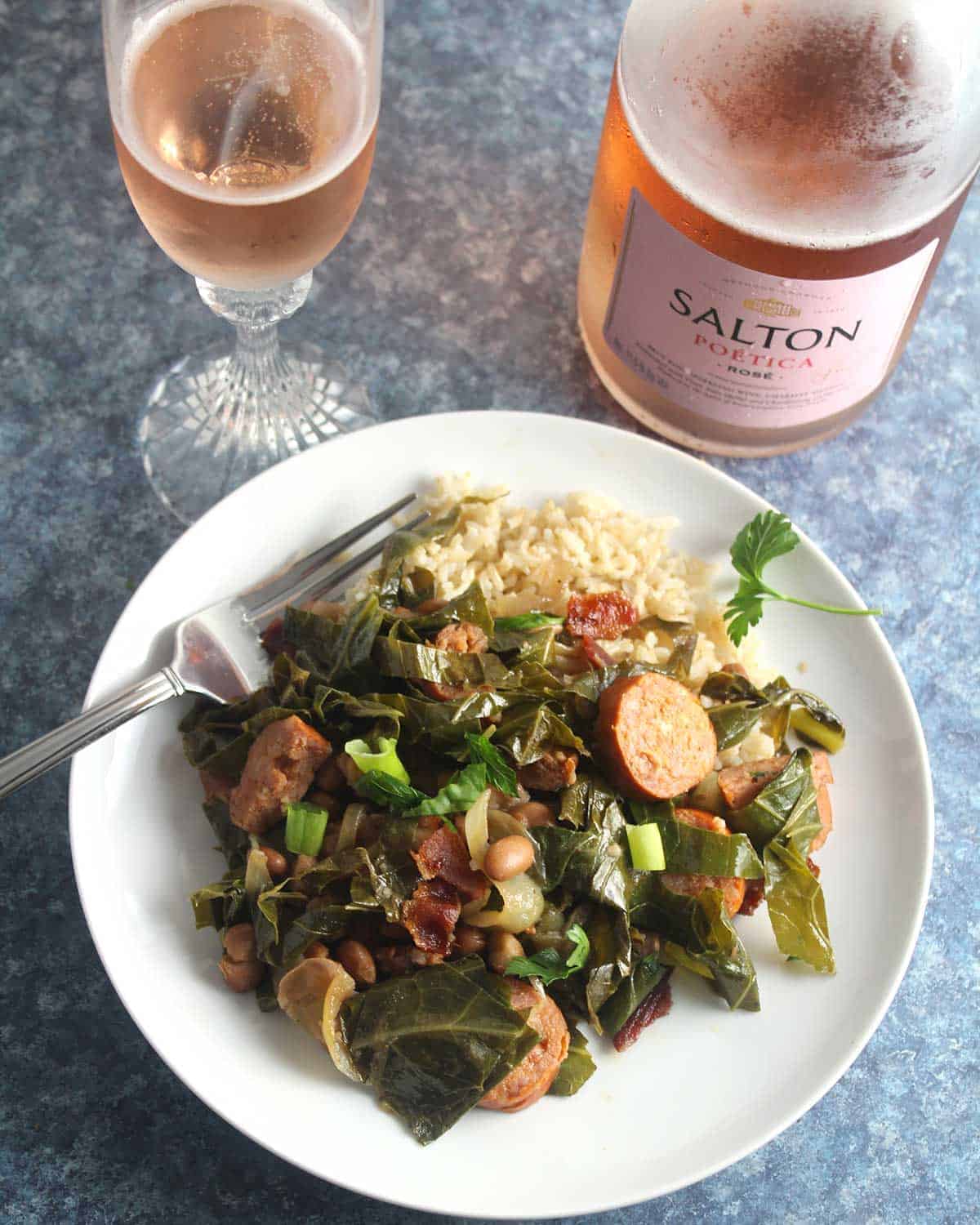 I love trying wines from new regions, so I was definitely looking forward to this month’s Wine Pairing Weekend event featuring wines of Brazil. Thanks to Susannah from Avvinaire for arranging the wine samples and hosting the event!

There was a bit of mystery involved in today’s #winePW event, as the wine arrived the day before I planned to shop for ingredients to make a meal to pair with the Brazilian wine. I’d long been meaning to make feijoada, a traditional Brazilian stew with pork and black beans.

But when I opened the wine shipment and found a bottle of sparkling rosé, I began looking at Brazilian that might go well with bubbly. I came across a recipe for the Feijão Tropeiro from Olivia’s Cuisine, which featured bacon as a prominent ingredient. Bacon and bubbly can work nicely in my experience, so I decided to work from that recipe.

Feijão Tropeiro translates to Cattleman’s Beans, as the ingredients traveled well on the long trek’s to move cattle and commodities. Olivia’s article provides more detail on the history of the traditional Brazilian recipe 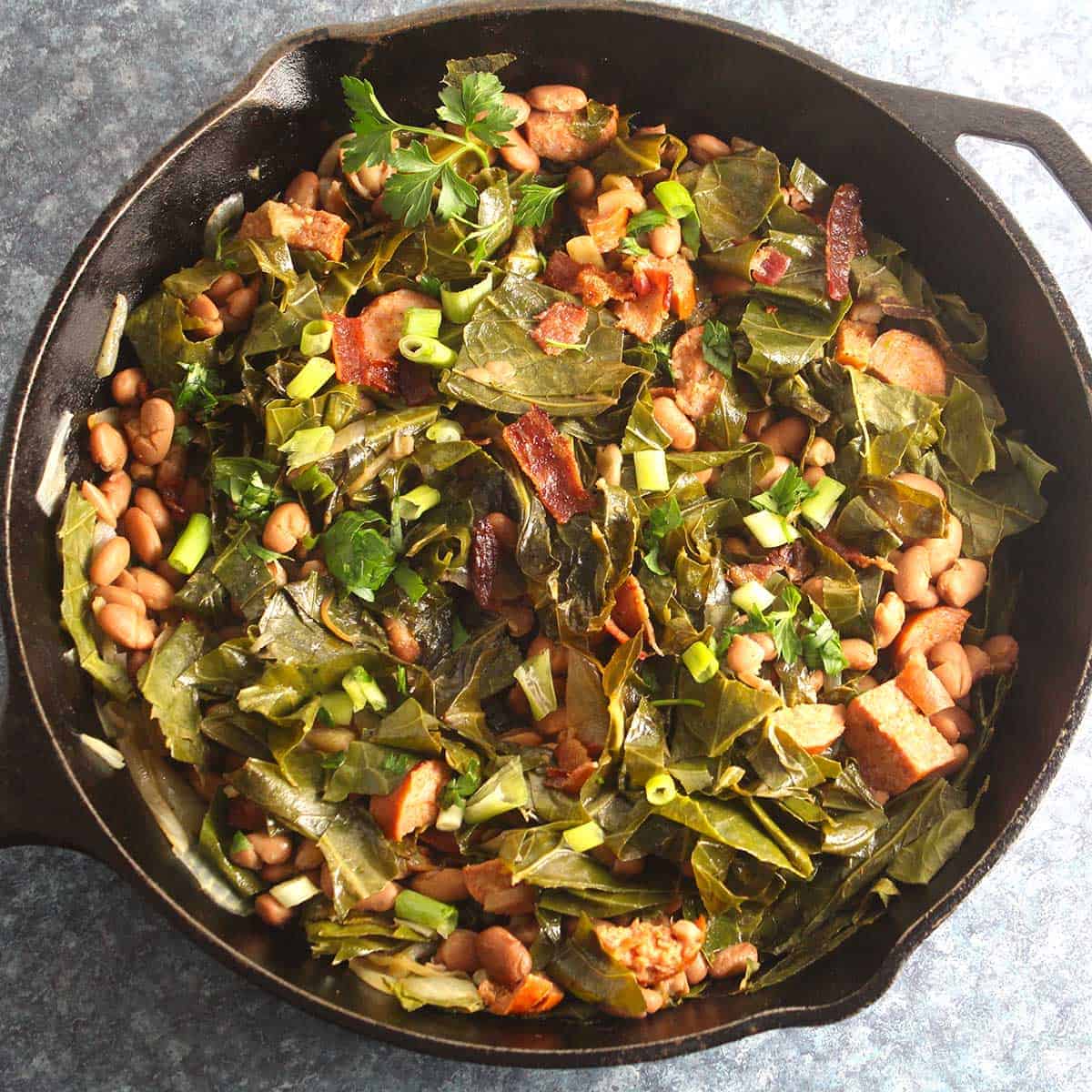 Sometimes when cooking a new type of dish, it takes a couple of times for it to really come out well. This wasn’t one of those times.

Jodi and I eagerly dug into this flavor Brazilian beans dish. Savory bacon and flavorful, spicy chorizo sausage flavored the hearty beans. And all that flavor certainly made it easy to eat our veggies! Collard greens, in this case.

Trying this new recipe along with Brazilian wine made it even better, as you might suspect. We will get to the wine soon, but first, a little more about the dish.

While this is my first time trying a Brazilian recipe, I’m no stranger to cooking greens with bacon and sausage. Although typically it is one or the other! My popular Portuguese Kale Soup recipe is a good example of greens cooked with sausage. Using bacon and sausage in this Brazilian beans recipe certainly doubles down on the flavor.

The Olivia’s Cuisine recipe I referenced called for Calabresa sausage, which is common in Brazil, as is linguiça. Some other Brazilian recipes I referenced noted that Mexican chorizo might be easier to find in the US and is a suitable substitute. So I went with the chorizo, but you could definitely try this recipe with one of the Brazilian options if you find it. But the North Country Mexican chorizo does have great flavor — I’ve included my Amazon affiliate link in case you want to order some for this recipe. 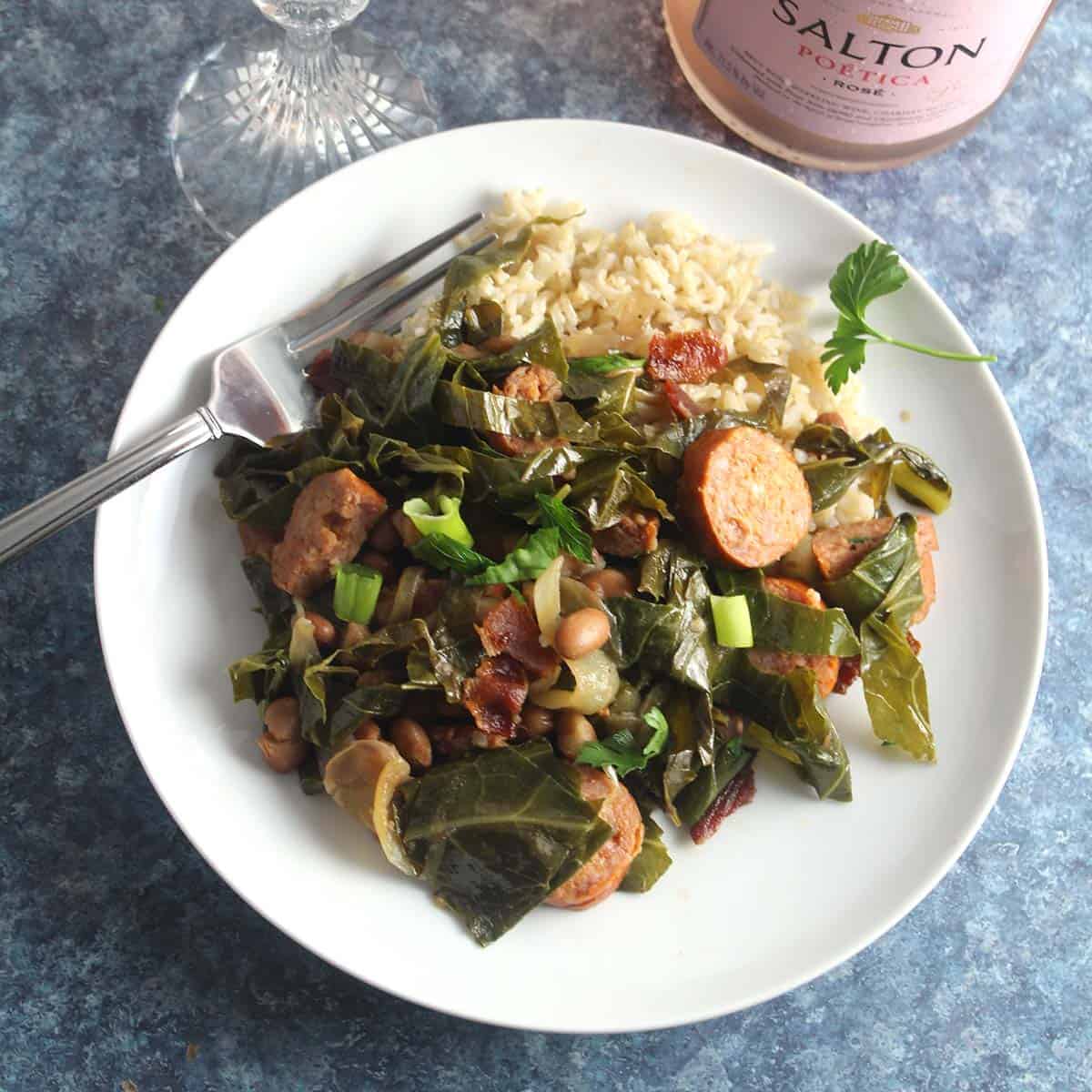 I often use chicken sausage these days for nutrition reasons, but we went all in on the pork for this recipe today!

Black beans seem to be most commonly used in Brazilian recipe. But Olivia’s recipe called for pinto beans, and that’s what I used. I’d say they are milder than black beans, and thus better absorb the rich flavors of the bacon and sausage.

Olivia’s recipe also calls for manioc flour, common in Brazilian cooking, to thicken the dish and add texture. When I saw the Whole Foods price of cassava flour, which is basically the same as manioc as best I can tell, I thought I’d try to pick up some manioc flour at the Brazilian market in town. They didn’t have any, but our recipe had plenty of flavor and substance without it.

I have to confess that I spent more time researching Brazilian food for this even than I did the wine!

Susannah presents 10 facts about Brazilian wine that are a good starting point for learning about the region. From her article, I learned that Brazil has a long history of winemaking stretching back to its early colonial period. Today it is the fifth or sixth largest wine producer in the Southern Hemisphere, depending on which list you reference.

The #winePW group teamed up with Wines of Brasil for this event. I gather the US spelling “Brazil” is an Anglicized spelling, which I use in the article other than referencing the trade organization.

Our Brazilian wine sample came from Salton Winery, the oldest in Brazil. Salton Winery was founded back in 1910 by Antonio Domenico Salton supported by his seven sons. The winery is located in the Serra Gaucha region, which is the largest of the country’s six main wine regions. According to this article on Wine Travel Stories, roughly 70% of their grapes come from local growers with 30% coming from Salton vineyards. Today the winery is run by the 4th generation of the Salton family in the business. 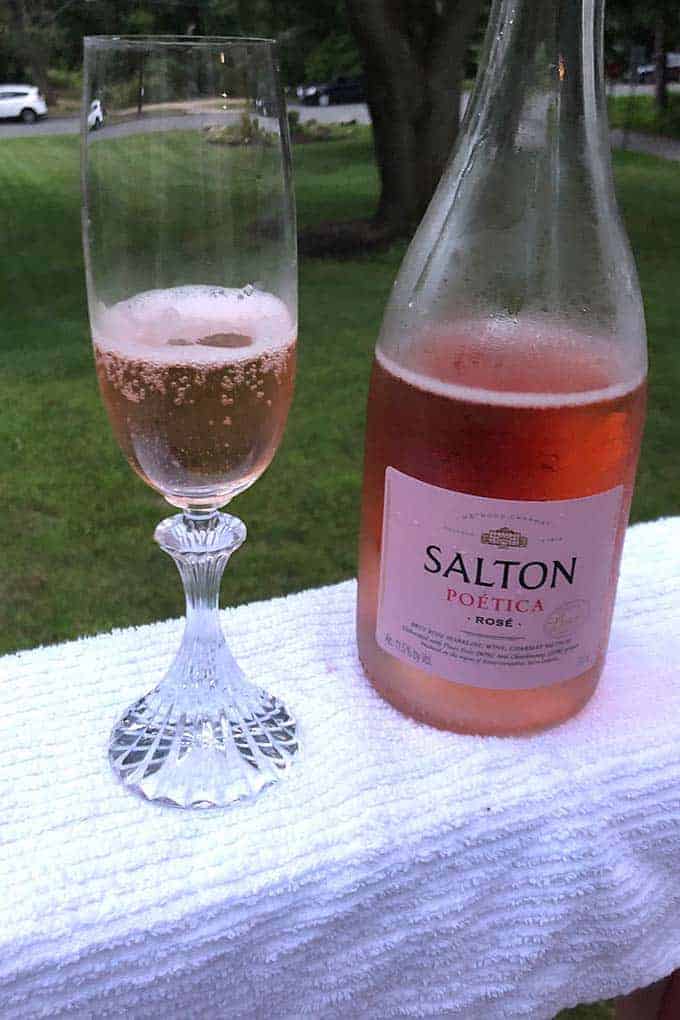 OK, it is time to talk about our Brazilian wine pairing for this recipe! We had a bottle of Salton Poética Rosé ($8, 11.5% ABV) provided for this event. This is a dry sparkling rosé, made from 80% Pinot Noir and 20% Chardonnay in the Charmat (tank) method.

Overall, I would say that the Salton Poética Rosé is a pleasant wine to drink and the price is certainly reasonable. It is probably better to sip as an aperitif or with light appetizers rather than pairing it with a hearty meal like our Brazilian beans.

Fortunately, we had plenty of leftovers of our tasty Brazilian beans! That gave us a chance to test some other pairings (but alas, only one bottle of Brazilian wine!). We were doing a Snooth tasting with Murrieta’s Well this week.

I thought we’d try a bottle of white and a red with the Brazilian Beans, in the interest of wine pairing science. We started with the 2018 Dry Orange Muscat ($38, 14.6% ABV), a very interesting dry version of this grape often featured in sweet wines. The “orange” in the name refers to the Orange Muscat grape, not the winemaking style sometimes called “orange wine”. Lemon fruit, stone and honey on the palate, with decent acidity that helps make it a food friendly wine. 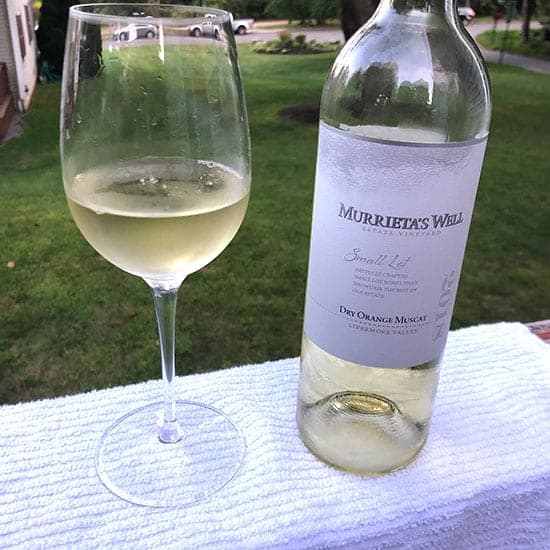 Then we went to The Spur 2017 ($35, 14.5% ABV), a delicious Cabernet Sauvignon based blend. The nose is like walking through a pine forest. Licorice and black cherry on the palate, layers of flavor and round mouthfeel.

Both the red and white from Murrieta’s Well worked quite well as pairings for the beans. I think they key is that both wines were bold and flavorful, which enabled them to better match the flavors of the dish. This is a good illustration that choosing between red or white is often not the most important aspect of wine pairing. A big flavored dish needs a bolder wine that has the heft to to stand up to the dish, or else the food can overwhelm the wine. 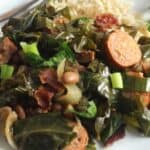 Brazilian style beans and greens recipe gets tons of flavor from the bacon and chorizo sausage. Loosely based on the Feijão Tropeiro from Olivia’s Cuisine.

David of Cooking Chat will be pairing “Brazilian Beans, Greens and Bacon with Sparkling Wine” (you are here)

Jill of L’Occasion posts “Bubbles from Brazil: a Treat for Wine Lovers”

Liz of What’s in the Bottle? joins with “Discover Brazilian Bubbles“ 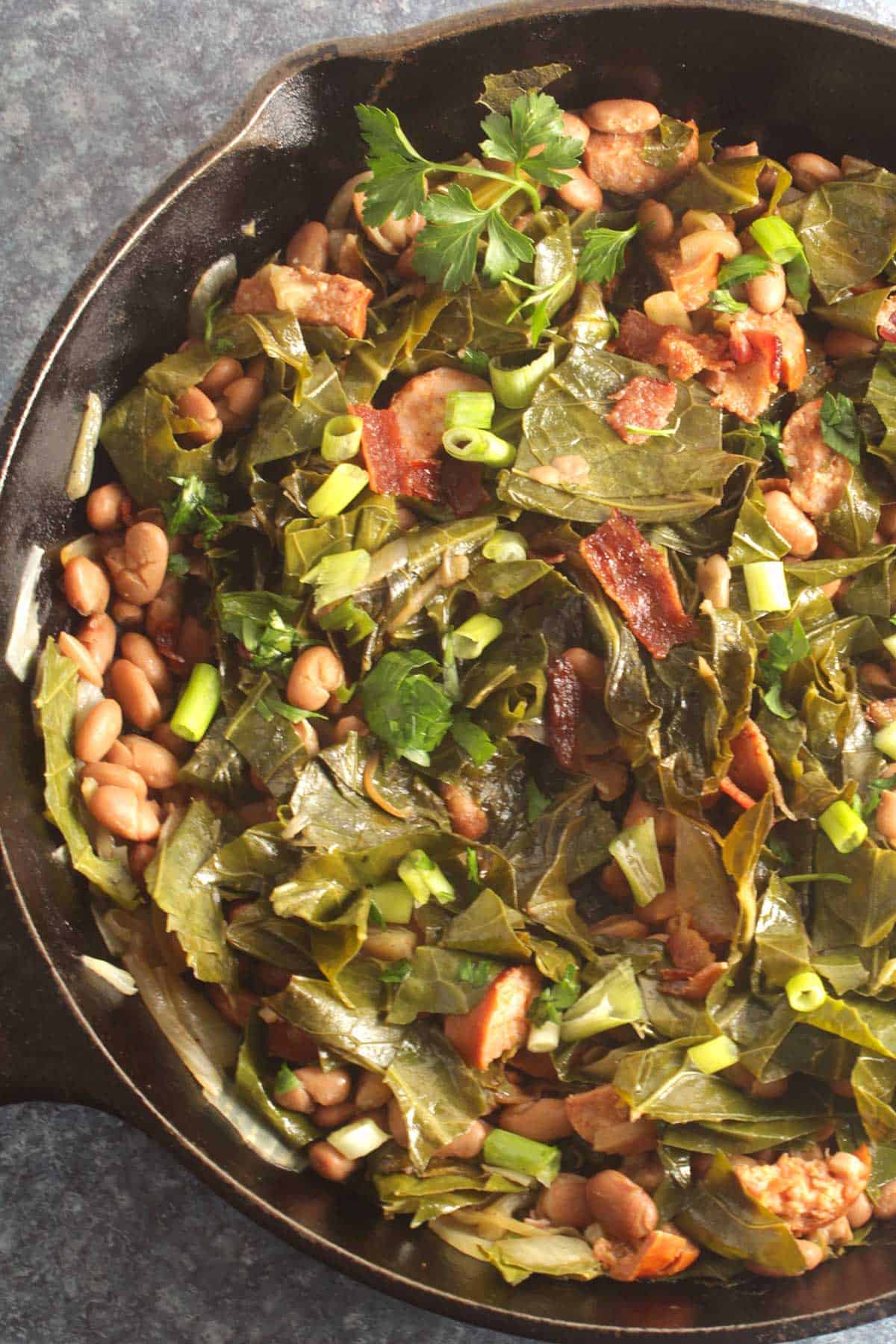