Hatch Chili with Turkey is a flavorful and healthy recipe featuring the special chile peppers from New Mexico. We include options for making the chili in a slow cooker or on the stovetop. Recipe made using a complimentary bag of roasted Hatch Chiles from the Hatch Green Chile Store. Check out our collection of the Best Hatch Chile recipes if you are looking for some other ideas!

We paired this turkey chili with a Cabernet Franc from Paso Robles, as part of the Wine Pairing Weekend’s focus on the region this month. Slow cooker version of the recipe originally published in September 2016; updated with the wine pairing suggestion and stovetop option in November 2021.

Today we are highlighting and pairing two products that take on the unique characteristics of regional growing conditions – the combination of soil and climate referred to as terroir.

In our bowl, we have a delicious and healthy turkey chili, flavored by Hatch red and green chiles, which hail from the Hatch Valley in New Mexico.

These special, richly flavored chiles come into season in August, and can be found fresh in August and September. Good news! You can order them frozen, as we did, and enjoy the freshness throughout the year.

For more recipes ideas, be sure to check out our collection of the Best Hatch Chile Recipes.

Head down to the recipe card for the full details on how to make this chili. Here are some tips to keep in mind:

Heat level: The heat level in this chili is going to be driven by the Hatch chiles you use. When I’ve gotten fresh Hatch chiles, they tend to be in a medium spice level.

When you order frozen Hatch chiles as shown above, you can choose between a mild, medium or hot chile. I should also mention that the come all prepped for adding to the chili once you have thawed them.

We had mild chiles for the most recent remake of this Hatch chili. I added a bit of extra chili powder to bring the spice level of the chili up to a medium range.

Generally speaking, the chili prepared as instructed will give you a flavorful but moderate spiced chili. Among other virtues, that makes it more conducive to pairing with wine!

The heat in a chile pepper comes from the pith, the white tissue connecting the seeds with the outer part of the plant. Removing this reduces the heat level, using some or all of it increases the heat.

Slow cooker vs. stovetop: We initially made this recipe in the slow cooker. That is a great option when you have some time in the morning to do a little dinner prep. You can get the Hatch chili going in the slow cooker and have your dinner cooking all day, with no more effort. Perfect for a busy day!

Sometimes we’d rather just start this chili about an hour before dinner time, so we also have a stovetop version.

In the slow cooker method, the beans and turkey gradually absorb the liquid generated by the tomatoes. I recommend about a half cup less tomatoes when doing the stovetop version, to get the desired level of chili thickness.

What are Hatch chiles?

Hatch chiles are chiles grown in the Hatch Valley in New Mexico. As Preston Mitchell from the Hatch Green Chile Store explained to me in a previous comment here on Cooking Chat:

“[Hatch is] a town in Southern NM where the soil, climate, and tradition of growing chile are all so great that the chile grown here has developed a reputation in the marketplace. Similar to Champagne (made only with grapes grown in a specific area in France) or the Vidalia onion, (grown only in the Vidalia region of Georgia) “Hatch” is any chile grown here in the Hatch Valley.”

Can I use fresh chiles?

Yes. I call for frozen Hatch green chiles, which means you can make the recipe any time during the year. But if you have fresh chiles when they are in season in August or September, go ahead and use them! You will want to roast or grill them first, and peel off the skin when the roasted chile has cooled. Check out our Grilled Ribeye with Hatch Chile Salsa for details on how to do this.

Can I use leftover turkey in this recipe?

Yes! We keep leftover chili in the refrigerator in the chili for up to 5 days or so. I like to store it in the pan, and gradually reheat it on the stovetop. I find the flavor builds a bit with the reheating of leftover chili.

The first time we made this Hatch chili we paired it with a beer.

But that was awhile back, and since then, we have done a lot of experimenting on the topic of wine with chili.

I realized recently that Cabernet Franc is one red wine I hadn’t tried as a pairing for chili. I tested the combo a few weeks ago, and liked the pairing well enough to come back and do it again for today’s Wine Pairing Weekend event!

We had one bottle left of the 2019 Dracaena Wines Plummer Vineyard Reserve Cabernet Franc (14.5% ABV), and I figured it could be a good match for this turkey chili. I get brambles on the nose of this wine. On the palate, plum fruit and a variety of spices, including cinnamon. A long silky finish.

Why the pairing works

A super hot, five alarm style chili is going to be hard to pair with wine. But this Hatch chili has moderate spice levels, opening up to some good wine pairing possibilities.

Cabernet Franc is known for having notes of green pepper. Granted, that is bell pepper being referenced as opposed to chile peppers, but it seems like the pepper notes from the varietal do carry over to pairing well with chili.

The spice notes I get from the wine also work nice with the Cab Franc. I included cinnamon in my tasting notes, and also use a bit of cinnamon in this chili recipe. That set up a winning pairing! I give it an “A”! 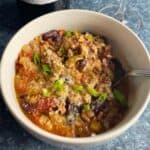 Turkey chili flavored by roasted Hatch chiles, for a healthy and flavorful meal. Instructions given for slow cooker and stovetop methods.

Be sure to check out all of the other #winePW articles featuring info about Paso Robles along with some tasty pairings!