Leftover steak fajitas are a delicious and easy way to use any extra steak or leftover roast beef. Cook up some peppers and onions, briefly heat the leftover steak with some fajita seasoning, and you are ready to enjoy your fajitas! You can easily have this meal on the table in 30 minutes.

OK, with a teenage son in the house, we don’t have leftover steak too often! But when it does, we like to have some good leftover steak recipes ready to go.

Our Leftover Steak Pasta has been a popular go to option, but we were ready to spice things up a bit! The result is this delicious Leftover Steak Fajitas recipe.

Onions cook up until they are nice and caramelized, followed by bell peppers. Once the peppers are nice and soft, the leftover steak slices get added along with some fajita spices.

Leftover steak is of course a very important for this recipe! We used sirloin steak, but you could use other cuts. For instance, flank steak is often used for fajitas. Tip: slicing the extra steak the night you first cook it makes the fajita prep easier! Slice it about ½ inch thick.

If you are looking for a good recipe for the initial steak dinner, try our Oven Roasted Sirloin Steak with Onion Sauce!

We have also made this recipe with leftover roast beef, such as our top round roast recipe.

Chopped onion: Slice up an onion thinly for making fajitas.

Bell peppers: Using a combo of two bell peppers makes for a nice presentation, but you can just use one kind if you like. Green bell peppers are probably the most common for fajitas, but I gravitate toward red, orange and yellow peppers – they bring a bit of sweetness to the dish.

Tortillas: While you could certainly serve the steak fajita combination of steak, peppers and onions directly on the plate, typically fajitas are served in tortillas. We used small fajita style tortillas, but other sizes are ok.

Toppings: There are a variety of toppings that work well with steak fajitas. Some good toppings to offer include:

Below is a visual overview of how to make these leftover steak fajitas. Head down to the recipe card for all the details.

Make the fajita spice blend (skip if using prepared spice blend). In a bowl combine the dried spices — ½ teaspoon each of garlic powder, cumin, paprika, salt and oregano plus ¼ teaspoon of cinnamon.

Set the fajita seasoning aside.

Start cooking the onions in a skillet with the olive oil on medium high heat.

When the onions start to get brown as shown above, you are ready to add the peppers.

Stir to combine the onions and peppers.

Add the fajita seasoning after the peppers start to brown.

Add the slices of leftover steak to the skillet after stirring in the spice blend.

Stir the steak to combine with the onions and peppers, along with a bit of broth, if using. Lower heat to medium, and heat for 3 to 4 minutes, until just warmed through.

Remove the steak fajita skillet from the stove, and prepare to serve.

Place a scoop of the steak fajita mixture on top of a tortilla. You can let each person add the toppings they would like. Fold up the tortillas, and enjoy those fajitas!

Note: Someone mentioned they thought the fajitas looked dry in one of the photos. We took the pics of the completed fajitas before adding toppings like sour cream and salsa which balance things out.

In terms of wine pairing for steak fajitas, you want a red wine that is big enough to match the steak, along with some flavor notes that will go along with the spices.

I went with the OVR Old Vine Red from Marietta Cellars to pair with this recipe. Inky purple in the glass, violets on the nose. Cherry fruit and strawberry jam on the palate, with a touch of chocolate.

The OVR is a red blend, predominantly Zinfandel sourced from Sonoma and Mendocino County. It worked pretty well with the leftover steak fajitas. It is also good with our Pulled Pork Risotto (which also makes use of leftovers!).

I’m thinking another good options could be the 2020 Camins del Priorat ($25, 14.5% ABV) we had recently with our steak with carrot top chimichurri. This red wine from Spain’s Priorat region is a blend of Syrah, Garnacha, Merlot and Cabernet Sauvignon.

Cabernet Franc, with its classic bell pepper notes, could also be a good option to try given the ingredients in fajitas. 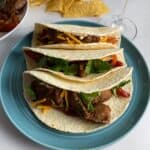 Leftover steak fajitas are a delicious and easy way to use any extra steak. Cook up some peppers and onions, briefly heat the leftover steak with some fajita seasoning, and you are ready to enjoy your fajitas!