Asian Grilled Pork Tenderloin is an easy and flavorful meal to make from the grill. Allow for at least one hour of marinating time in addition to the active prep and cooking time given; in other words start working on this at least 90 minutes before you want to sit down to dinner. Most of that time you can relax as the pork marinates and then cooks on the grill!

This Asian pork tenderloin marinade can also be used for making roast pork in the oven. We did that recently along with a new wine pairing. Disclosure: The Pinot Noir featured here was provided as a complimentary sample.

Awhile back, one of my board members hosted a couple of us for a casual summer meal to catch up. We started by blind tasting two GSM blends (Grenache, Syrah and Mourvedre). We knew one was a Châteauneuf-du-Pape, and the other a GSM blend from Paso Robles. The Paso winemaker used old world techniques, making it a tough call picking out which was which–but both wines were wonderful!

As we sipped our wine on the patio, Frank put together a simple, low maintenance meal featuring grilled pork tenderloin and fresh corn on the cob. As I savored the pork tenderloin with an Asian flavored marinade, I thought I would need to replicate the dish at home soon. Our Asian Grilled Pork Tenderloin is the result of that plan!

Pork tenderloin is juicy and flavorful when cooked right, and easily absorbs the flavors you cook and serve it with. For instance, we recently enjoyed Grilled Pork Tenderloin with Cilantro Pesto. And we also recently featured it in a delicious Pork Tenderloin Pasta recipe!

The Asian Grilled Pork Tenderloin starts with a simple marinade with soy sauce and a few other ingredients. Allow at least an hour to marinate the pork, two hours would work great if you have time.

We reserve the marinade to make a tasty sauce for the pork tenderloin. Any time you want to use marinade for a sauce, be sure to boil it for a good five to ten minutes. This reduces the sauce while also ensuring food safety.

I give the grilling time for pork tenderloin as 15 to 20 minutes. Your actual time will vary based on your grill and size of the pork. Be sure not to overcook the pork! As explained in this post on The Spruce, cooking pork to medium (145 degrees) is perfectly safe and much tastier than well-done meat.

I served the Asian Grilled Pork Tenderloin with some sautéed bok choy and rice drizzled with a bit of the sauce.

If you’d like to make some Asian flavored pork tenderloin when it is not grilling season, you can still use this recipe!

Simply follow this recipe for making the pork marinade as indicated up until step 5. Then, instead of grilling, you will preheat the oven to 400 degrees. Shake off excess marinade into the bag, and place the pork in a large roasting pan.

Place the pork in the oven and roast for about 20 to 25 minutes. Times will vary based on the size of the tenderloin. Check at 20 minutes. As noted above, you are looking to get the pork to 145 degrees internal temperature.

I was in the mood for a red wine when I first made the dish. Plus, red wine had worked well when my friend made a similar teriyaki style pork.

Pinot Noir is a natural red wine choice for Asian style meat dish, as the acidity can offset the saltiness of the dish. My original pairing for this pork tenderloin recipe was a Beaujolais, but recently went for a Pinot.

I opened the 2019 Ritual Pinot Noir ($21, 14% ABV) from the Casablanca Valley in Chile. The Pinot has cherry fruit, with black pepper and allspice notes. Light and fresh. A very good pairing for the Asian pork tenderloin. I’m thinking it could also be a good Thanksgiving wine option.

The Ritual Pinot Noir is made with organic grapes, and is fermented with wild yeast.

Keeping in mind that a Beaujolais can often be a good pairing alternative to Pinot, I served the Asian Grilled Pork Tenderloin with the 2015 Anne Sophie Dubois Fleurie ($24, 13.6% ABV), a red Beaujolais wine made from the Gamay grape. The wine is bright purplish red in the glass, with good cherry fruit and a pleasant mouthfeel. Notable minerality, a very good wine that is a great choice for our Asian Pork Tenderloin.

Fleurie is a region in the northern part of Beaujolais, noted for its soil which is largely pink granite. Definitely can see that come through in the mineral notes in the wine. I really enjoyed the wine and will have to try more from this appellation.

A white wine could also work for Asian flavor pork. I did contemplate trying a Riesling with the Asian Grilled Pork Tenderloin; a white Rhone or a Chardonnay might also work.

If you happen to be in the mood for a white wine, we have enjoyed this with a special white wine from Southern France, the Cigalus Blanc from Gérard Bertrand.

What to serve with pork tenderloin

OK, so we covered what wine to serve with this pork tenderloin, now let’s talk sides.

When we first made the recipes, we had some rice and sautéed bok choy on the side.

For our latest making of this Asian pork tenderloin, we had some basic mashed potatoes and roasted Brussels sprouts for side dishes. The sprouts went well with the Ritual Pinot we mentioned.

Drizzling a bit of extra sauce on the potatoes or rice adds some nice flavor.

You could also try serving this pork with our Sautéed Leek Greens with Bacon or the Mashed Sweet Potatoes with Cumin Sage Butter, which we often enjoy with pork. You could find some additional ideas in our What to Serve with Pork Ribs collection. 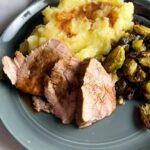