Today we share a Potato Bacon Skillet Casserole recipe based on the Savoie dish, Tartiflette. The recipe was developed to go with a Savoie wine we had to sample for the February Wine Pairing Weekend event. Disclosure: the wines discussed here were provided as complimentary samples. 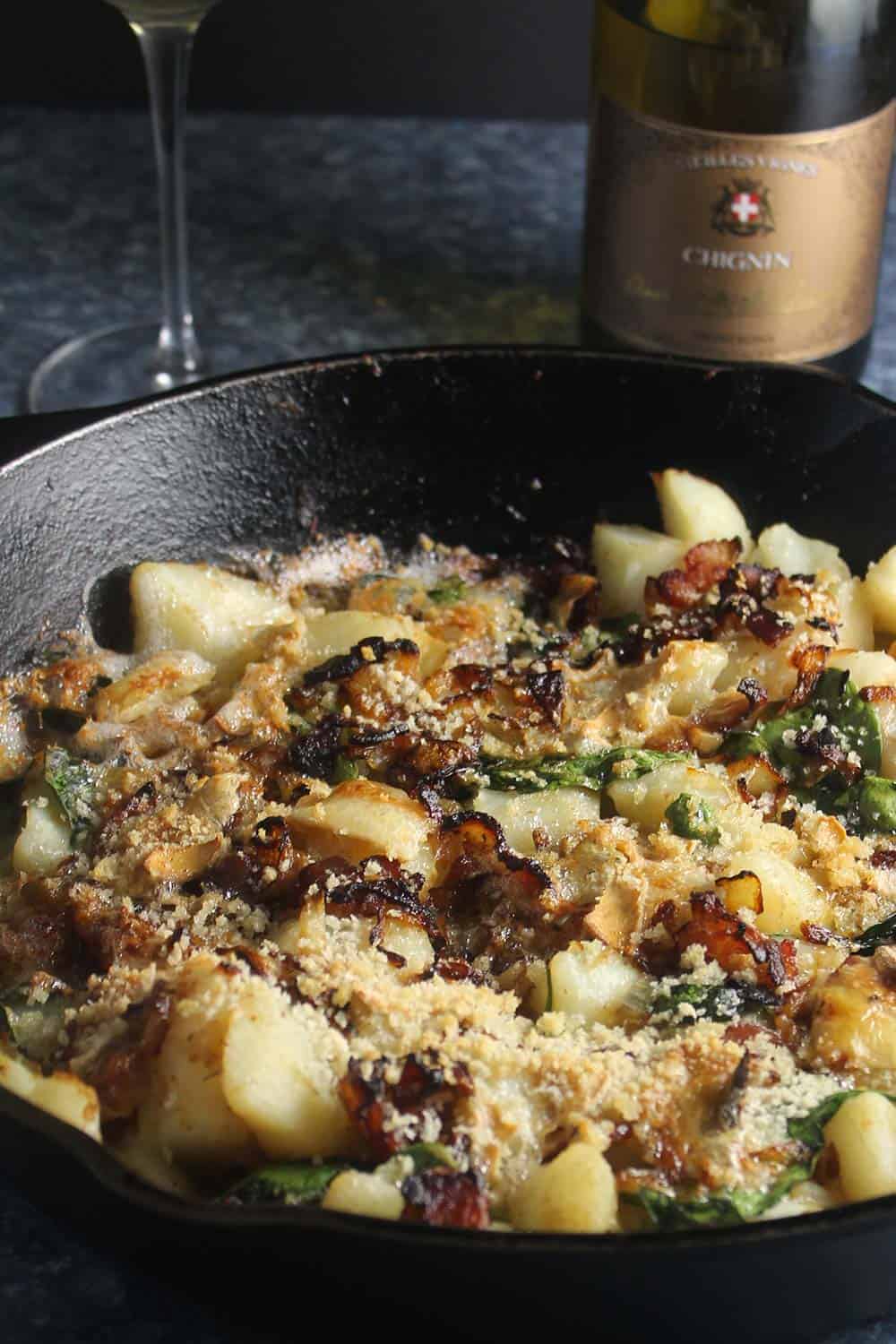 The Wine Pairing Weekend group is exploring Savoie today, a region in the French Alps. I like this description from importer Kermit Lynch’s website: 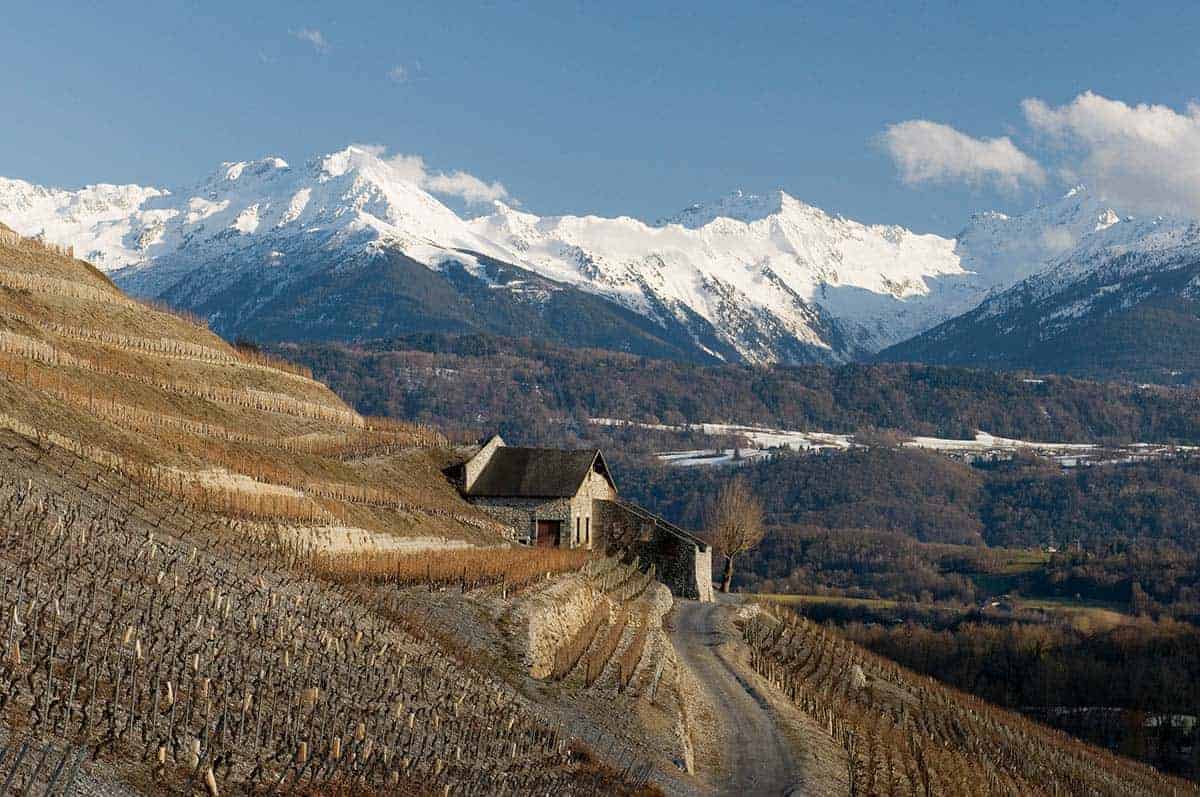 But the results produced by those who persist and make wine in the mountainous region can be excellent, as we will see through this #winePW event.

Unlike some wine regions, which have bountiful produce as a base for their cuisine, Savoie cooking relies on ingredients that can keep when snowed in for a few days…or more. Savoie food tends to be things that would satisfy after a day of skiing!

Tartiflette is a classic Savoie dish featuring potatoes with a layer of bacon and topped with melted cheese. The recipe was invented as a way to boost sales of Reblochon cheese.

According to this article, tartiflette was the most searched for recipe in France in 2017! And why not–potatoes, bacon and cheese! 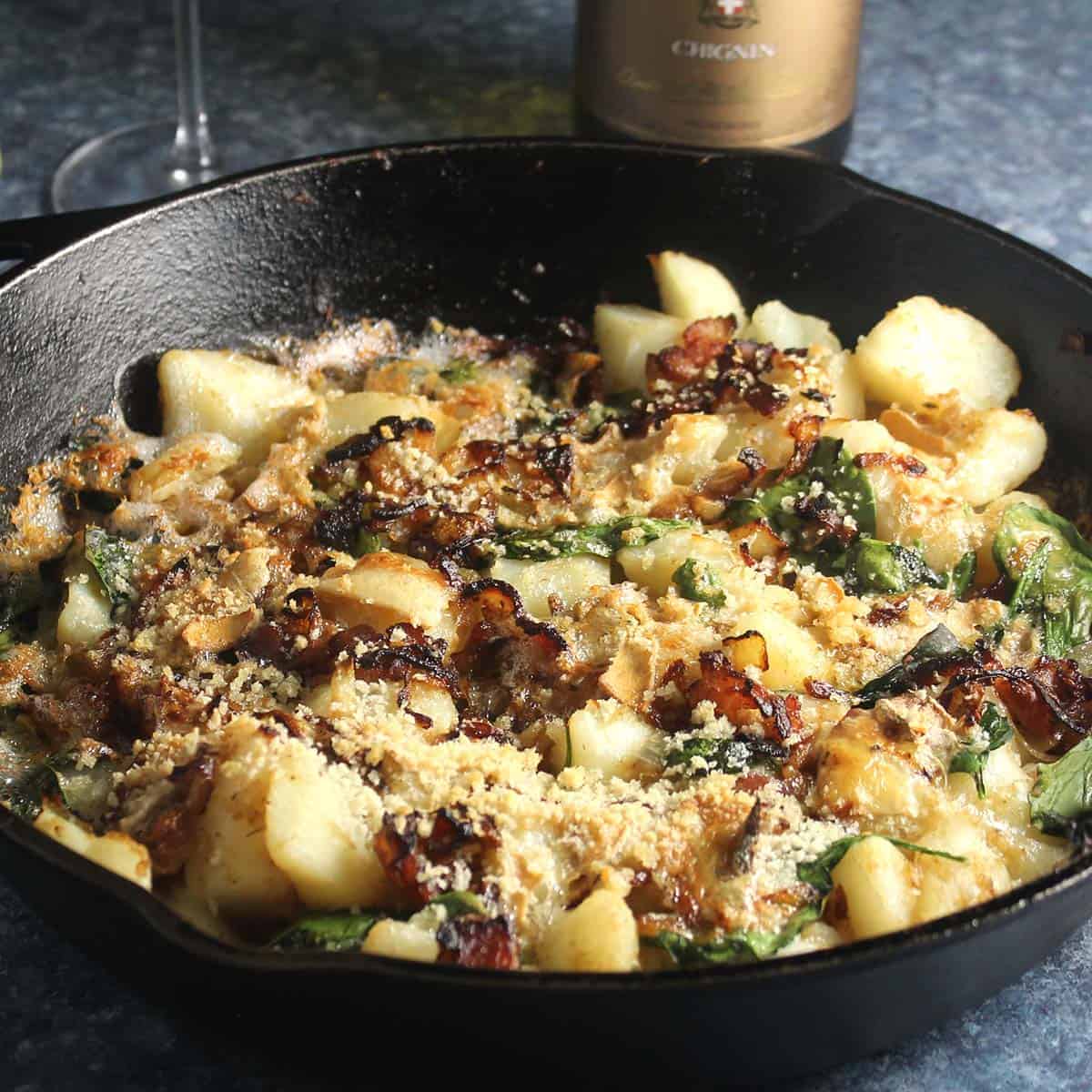 You will note that we have labelled our recipe Potato Bacon Skillet Casserole, and indicated that it is inspired tartiflette.

I have toyed with enough traditional recipes to know the umbrage people take when you veer from how their grandmother made the dish. See for instance some of the colorful comments on our Portuguese Kale Soup recipe.

As I perused a number of tartiflette recipes, I saw a variety of methods for making the dish. I decided I had the basic idea and would make my own version, and make no claims to authenticity. But it would be delicious!

I originally planned to prepare the main ingredients in my cast iron skillet, then transfer them to a casserole dish. But after briefly cooking the parboiled potatoes in the bacon grease left in the skillet, I decided to leave them there and make a nice rustic casserole in the skillet.

Reblochon is a soft washed rind cheese made in Savoie, made from raw cow’s milk.

Did you catch that part about raw cow’s milk? Unfortunately, US FDA rules ban the import of cheeses made with unpasteurized milk that are aged for under 60 days. Reblochon is typically aged for 50 days, so I wasn’t able to get my hands on it for this recipe.

More on this rule and fancy cheeses impacted by it can be found in this article.

The cheesemonger at Whole Foods said I might be able to track down Relochon at a smaller cheese shop. He suggested one of their strong bries, such as their Brie de Nangis. This suggestion is consistent with other recommendations for Reblochon substitutes I found on the web. 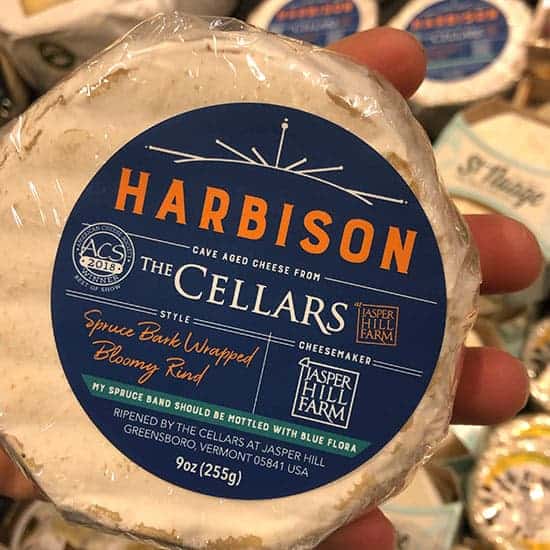 Then I consulted Elisabeth, the cheese expert at Pairings Wine & Food. She pointed me in the direction of the Harbison Bloomy Rind Soft Cheese from Jasper Hill Farm in Vermont. She gave me a little sample of this good stinky cheese. Just a little nibble on the tasting spoon was packed with rich, funky flavor that made me think of mushroom.

I had my cheese and was ready to make a version of tartiflette to serve with our Savoie wine. See the full recipe details below in the recipe card.

Here are some tips for making our version of tartiflette, click here to jump down to the recipe for the full details.

OK, I know dairy-free might sound heretical for a recipe developed to boost cheese sales! But our son can’t eat dairy.

For him, I pulled out a bit of the potatoes along with the bacon / onion mixture, and put in a small casserole dish. I topped with some dairy free parm cheese, and the bread crumbs. I baked for the same amount of time as the main dish, and he really liked the way his version came out! 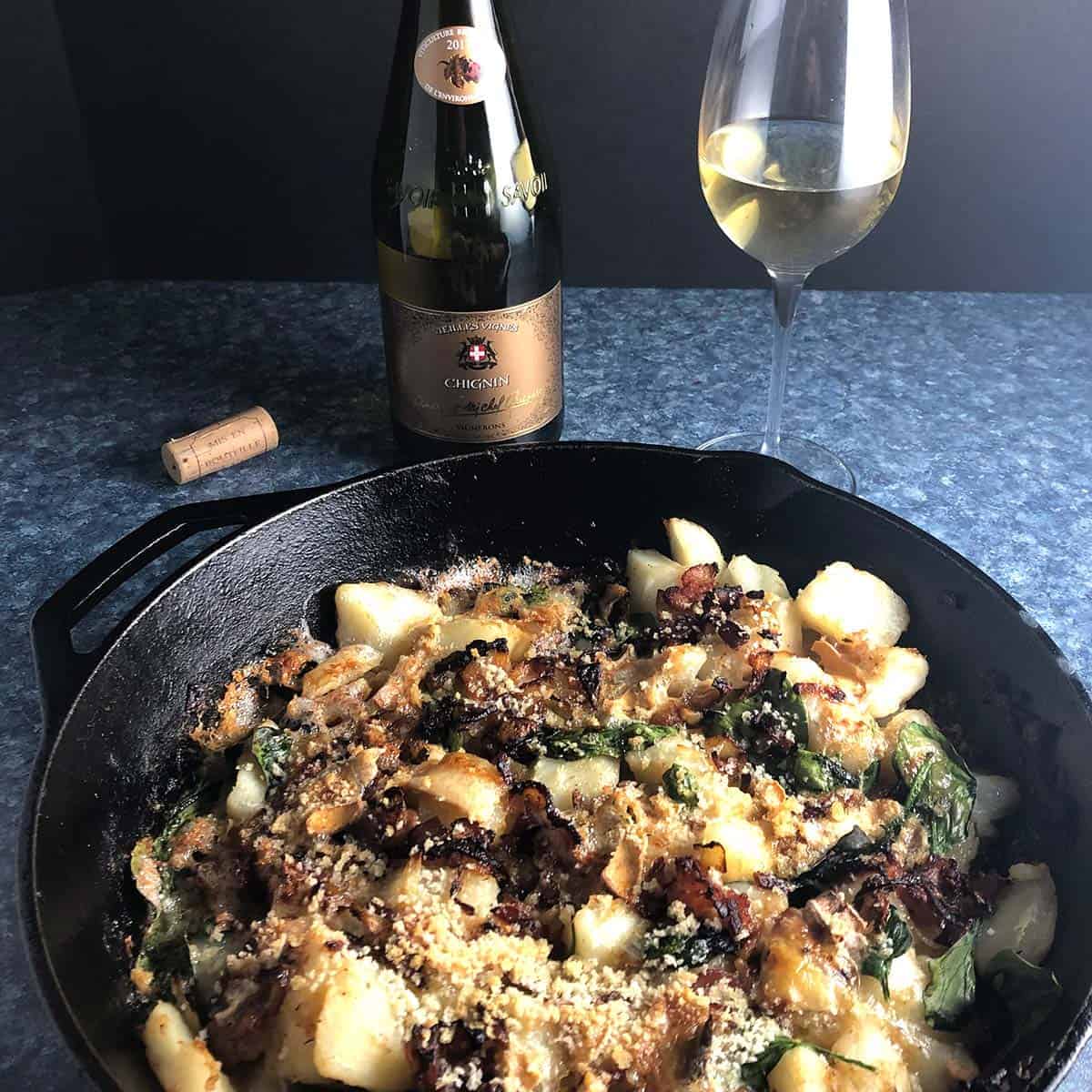 As I researched various Tartiflette recipes, I noted several mentioned serving the dish with a white Vin de Savoie. Somehow I was thinking that I had received two Gamay samples, so was pleased to realize my remaining bottle was in fact a white.

One other note on the wine, they aren’t kidding when they say Vielles Vignes — the Jacquère vines for this wine are over 70 years old!

We paired a Pinot Noir with the leftover tartiflette, and that worked well, too. Not as good as the regional pairing though!

Michel Quenard and his family farm twenty-two hectares of vineyards along the steep, rocky slopes of the Coteau de Torméry around Chignin. The limestone in the soil leads to great character in the wines.

Michel’s grandfather started the domaine in the 1930s, but sold most of the wine in bulk. His father André started making wine under the Quenard label, and Michel joined him in the 1970s after earning his degree in viticulture and enology.

In addition to several other wines made with the Jacquère grape, Quenard makes whites from Altesse and Bergeron, the local name for Roussanne. They also make reds from Pinot Noir, Gamay and Mondeuse. Quenard produces 15,000 cases per year.

The limestone scree that makes up this vineyard land, resulting from millions of years of erosion of the majestic peaks of the Massif des Bauges, lends great character to the wines produced here. 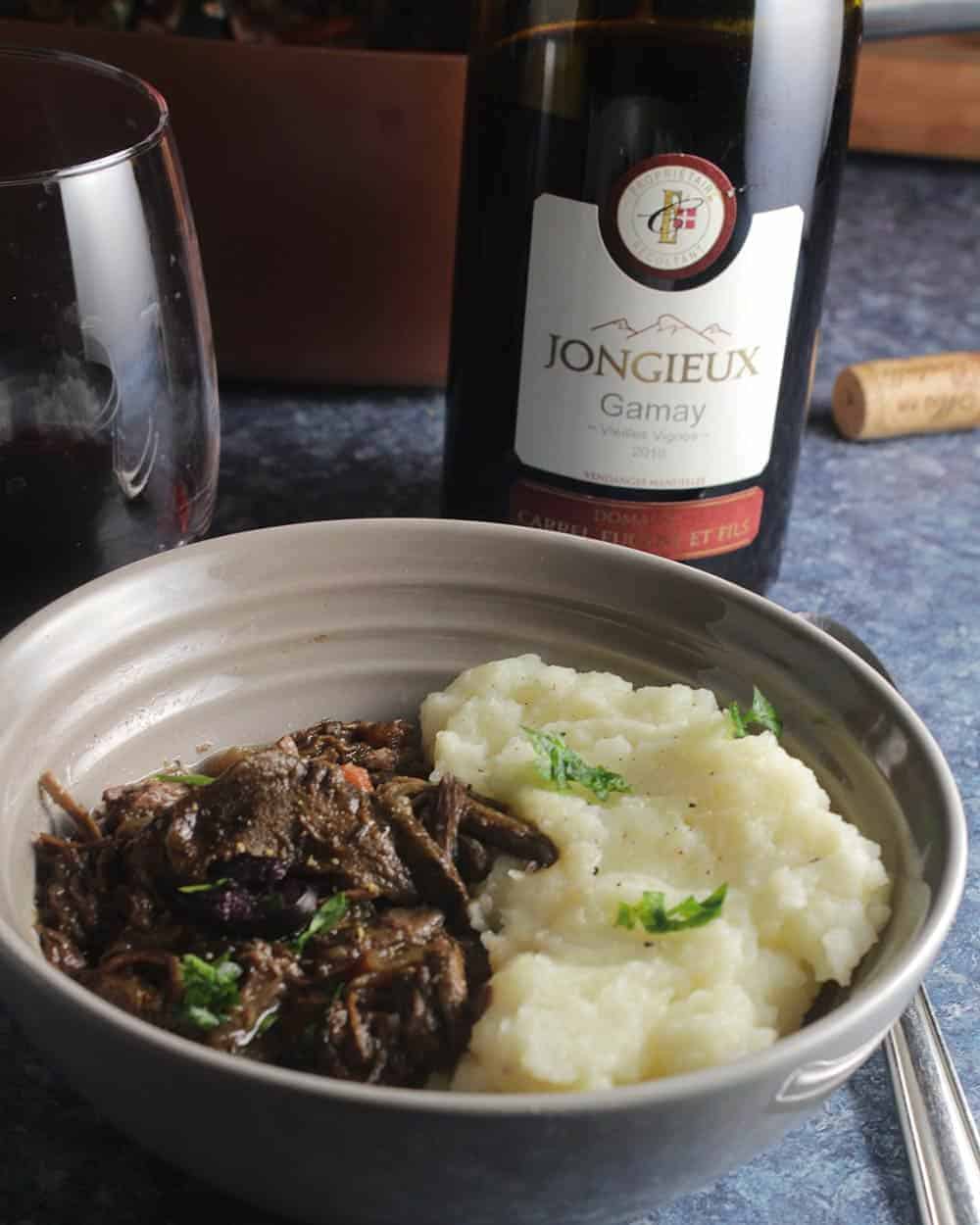 We also had a red wine from Savoie to test out for this event — the 2016 Domaine Eugene Carrel Jongieux Gamay ($15, 12.5% ABV). We paired it with our Porcini Beef Stew, delicious!

This Gamay has an earthy barnyard nose, purplish black in the glass. Dense blackberry fruit on the palate, with notes of tar. Definitely has meaty characteristics that make it a good pairing for the stew! 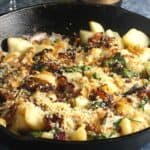 Potatoes covered with a layer of bacon and onions, topped with cheese and baked for a savory dish that is sure to satisfy! Based on the French recipe tartiflette popular in the Savoie alpine region.

I love the convenience of cooking up a skillet meal, quickly melding flavors together. Here are some more of my favorite skillet recipes:

Be sure to check out all of these tasty ideas for Savoie wine pairings!

If you are reading this early enough and would like to join our conversation, we’ll be using the hashtag #WinePW at 11 a.m. Easter time / 8 a.m. Pacific time on Saturday. Participating bloggers and others interested in the subject can connect via a live Twitter chat. It’s a nice bring way to bring in others interested in the subject. Hope to see you there. Just be sure to use the hashtag so we can see your tweet. 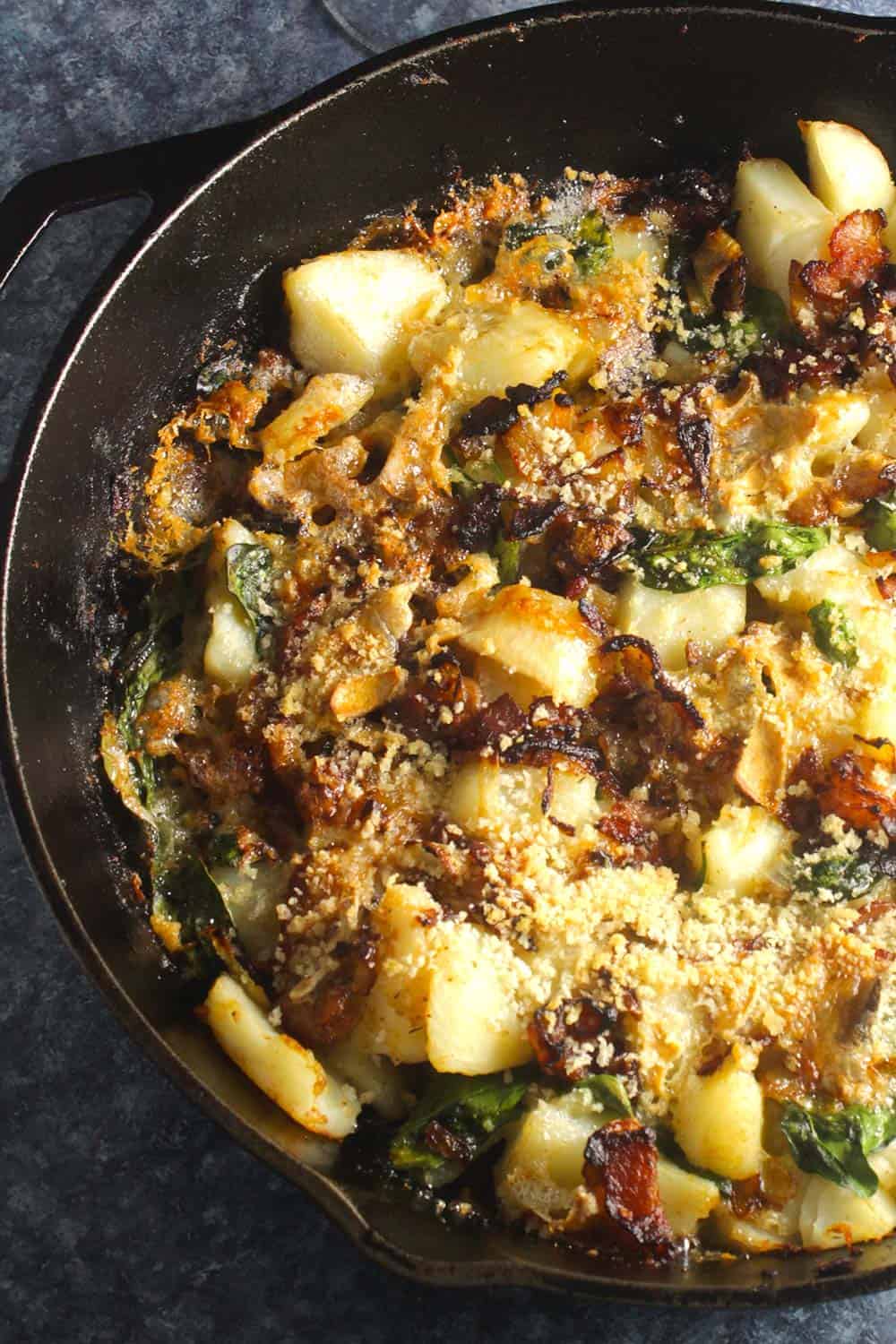