Red Wine Braised Short Ribs with Mushrooms: Beef short ribs slowly braised in red wine until they are melt-in-your-mouth tender, finished with mushrooms for a delicious cold weather dinner. Originally published in December 2014, we updated based on a February 2020 remake of this red wine braised short ribs. Allow at least 6 hours to marinate the ribs, in addition to the cooking time.

Inspiration for the recipe

I originally came up with this Red Wine Braised Beef Short Ribs for a wine club gathering back in the fall of 2014. I was looking for a dish that can simmer until the group is ready to eat, but needed something different than the variations of beef stew such as my Porcini Mushroom Beef Stew.

These beef short ribs get cooked low and slow for about three hours, giving plenty of time to let that rich beef flavor get really intense. By the time the ribs are ready to serve, the meat practically melts in your mouth– “like butter” was a common refrain as folks dug into this savory dish.

In developing my plan for the dish, I referred to this recipe Jeff from foodwineclick shared.

My original plan was to serve pieces of the meat topped with a mushroom sauce. But with the beef braising for an extended period of time, you get that meat falling off the bones quality. I lean into that, taking the meat off the bones and finishing the dish by simmering it with mushrooms for a richly flavored meal.

Here are a few tips for making these braised short ribs; click here to jump down to the recipe for the full details.

Short ribs are cut from a portion of the longer rib bone; thus the name. We get individual short ribs, known as “English cut”, with each bone coming separately along with a piece of meat.

There is usually a good amount of fat along with the meat when you get short ribs. This adds nice flavor through the slow cooking process; but you will want to pull out the bigger pieces of fat prior to serving.

You need to consider the weight of the bones plus the fat when determining the amount of short ribs to buy. Our recipe calls for 3.5 pounds of short ribs, which winds up generating about 6 servings.

Red wine for this recipe

The short ribs get marinated overnight in a red wine based marinade.

Now, you may have read the advice that you should cook with the wine you will serve with the dish. Let’s not get carried away that notion, people!

We initially made these braised short ribs to serve at a wine club dinner with an impressive array of wines to sample, including a great Australian Shiraz that was paired with the ribs. I sure don’t have the budget to cook with bottles of wine that priced in the $30 to $50 range!

The piece of the “cook with what you’ll serve” advice I do subscribe is that I cook with a similar style wine to what we will drink with the dish. And you do what it to be something drinkable. For this recipe, I have used an inexpensive Merlot that just barely qualified on the drinkability factor. I was happy to put it to work cooking!

More recently, I made these short ribs with an inexpensive Chianti.

Here’s an overview of the steps for making the short ribs; click here to jump down to the recipe for the full details including ingredient list.

As you may have guessed, these braised short ribs call for a big, bold red wine. We initially enjoyed these ribs with a good Australian Shiraz, that is definitely a nice option.

For our recent remake, we opened a bottle of the 2015 Pierre Rougon Vacqueyras ($24), a Grenache / Syrah / Mourvedre blend typical of the Southern Rhone. Vacqueyras is an appellation (AOC) along the banks of the River Ouvèze, and can be an affordable alternative to Châteauneuf-du-Pape.

I get bright berries on the nose of the Vacqueyras. Cherry fruit on the palate with notes of black pepper. Good structure, making it a good match for this hearty short ribs dish.

Both our pairings involved Syrah (which goes by Shiraz in Australia). But you could certainly call upon a big Cab to go with these short ribs, too! 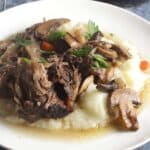 If you like this recipe for braised short ribs, check out some more of our favorite beef dishes!