Garlic Mushroom Pork Chops recipe features grilled pork chops smothered with a garlic mushroom sauce, served with some hearty quinoa for a satisfying meal. We served it with a Cahors Malbec, which made a good pairing. Disclosure: The wines suggested here were provided as a complimentary samples. 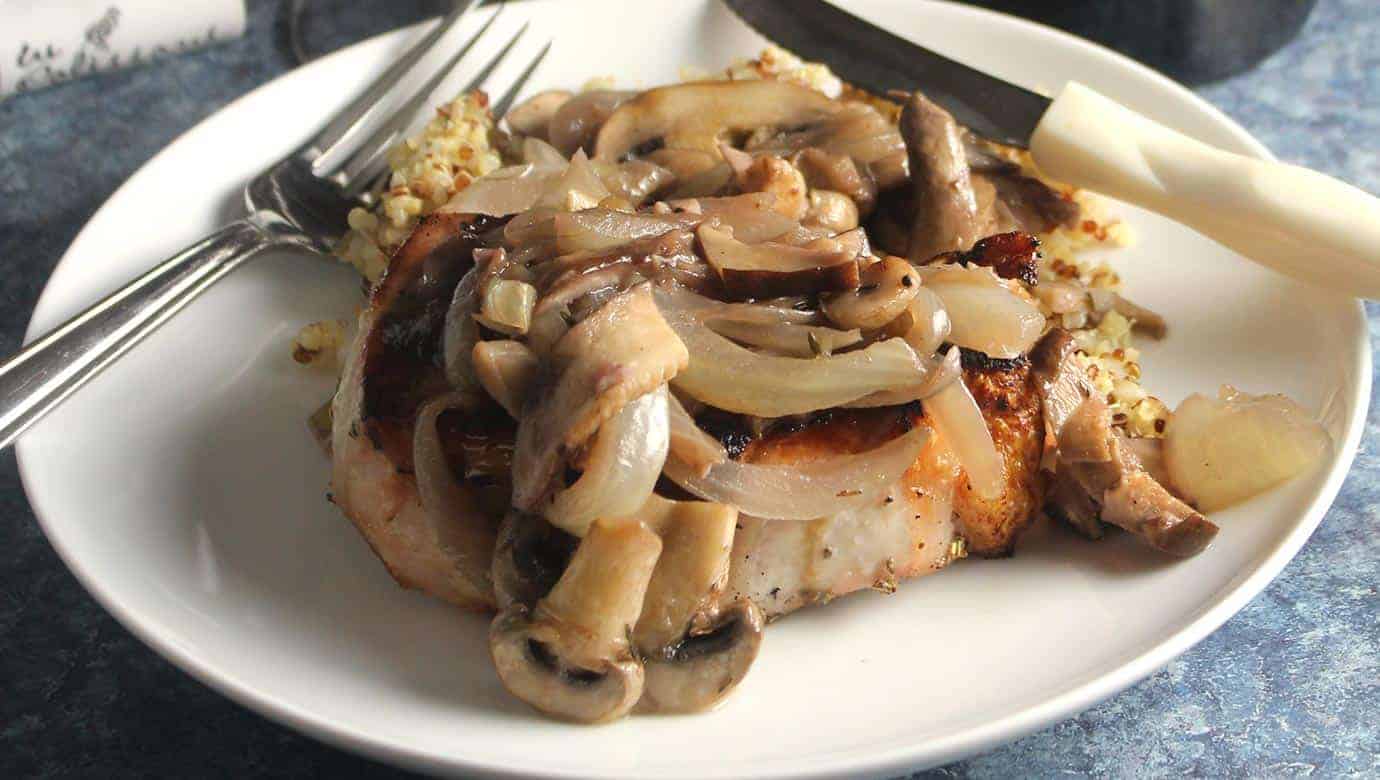 One of the things I really like about pork is the way the relatively mild meat can really show off a sauce or other preparations.

This garlic mushroom sauce for pork chops is definitely one to show off! The savory mushrooms are very satisfying, and delicious with the quinoa as well.

We made the Garlic Mushroom Pork Chops to try along with one of several Cahors Malbecs we have been sampling for the October Winophiles event focused on the region. While this isn’t a French recipe per se, my research suggested wild mushrooms are abundant in the region, and also work well with Malbec. So a mushroom sauce for pork seemed like a good option! Creamy mushroom sauces were a suggestion for Malbec on Wine Folly, so that reinforced my direction. 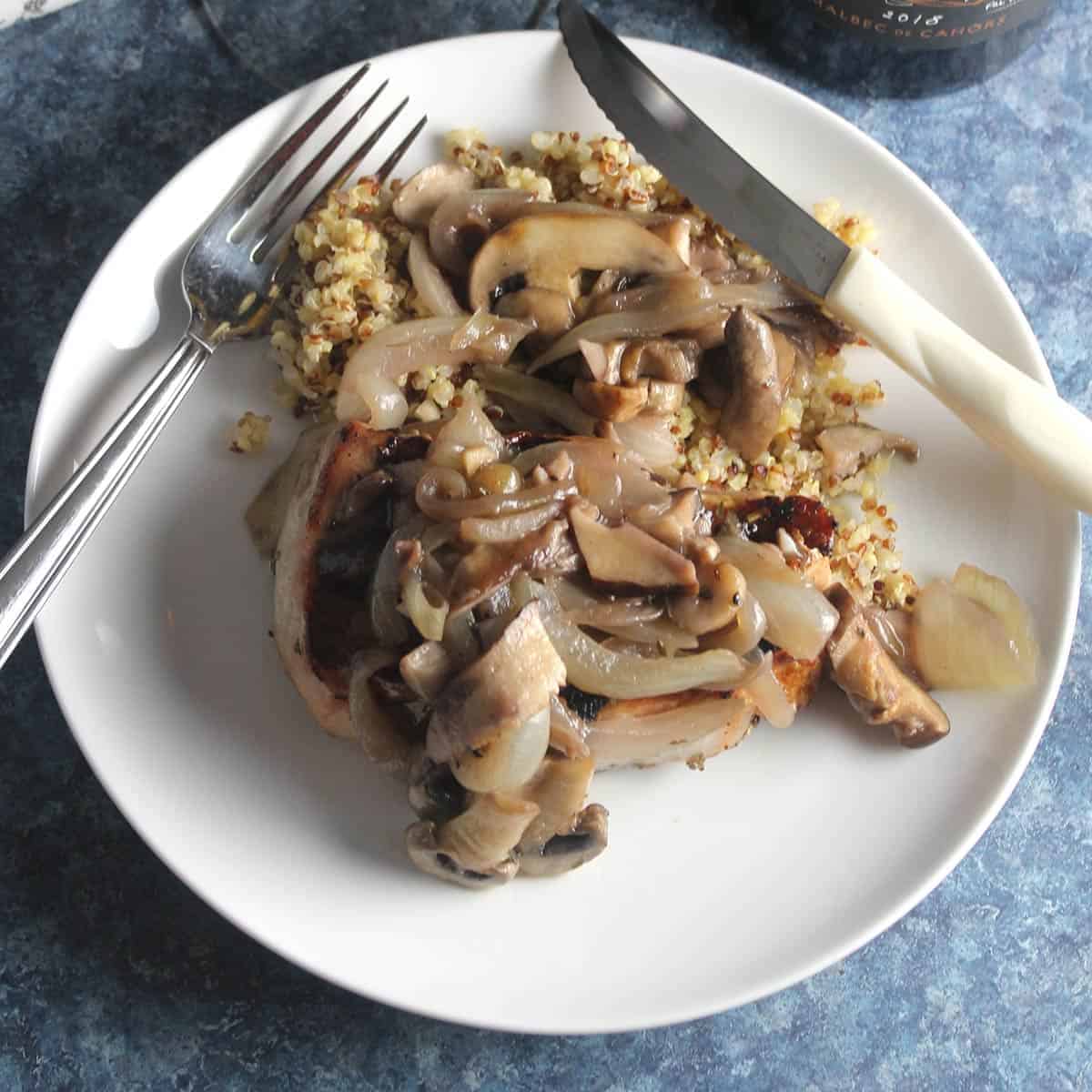 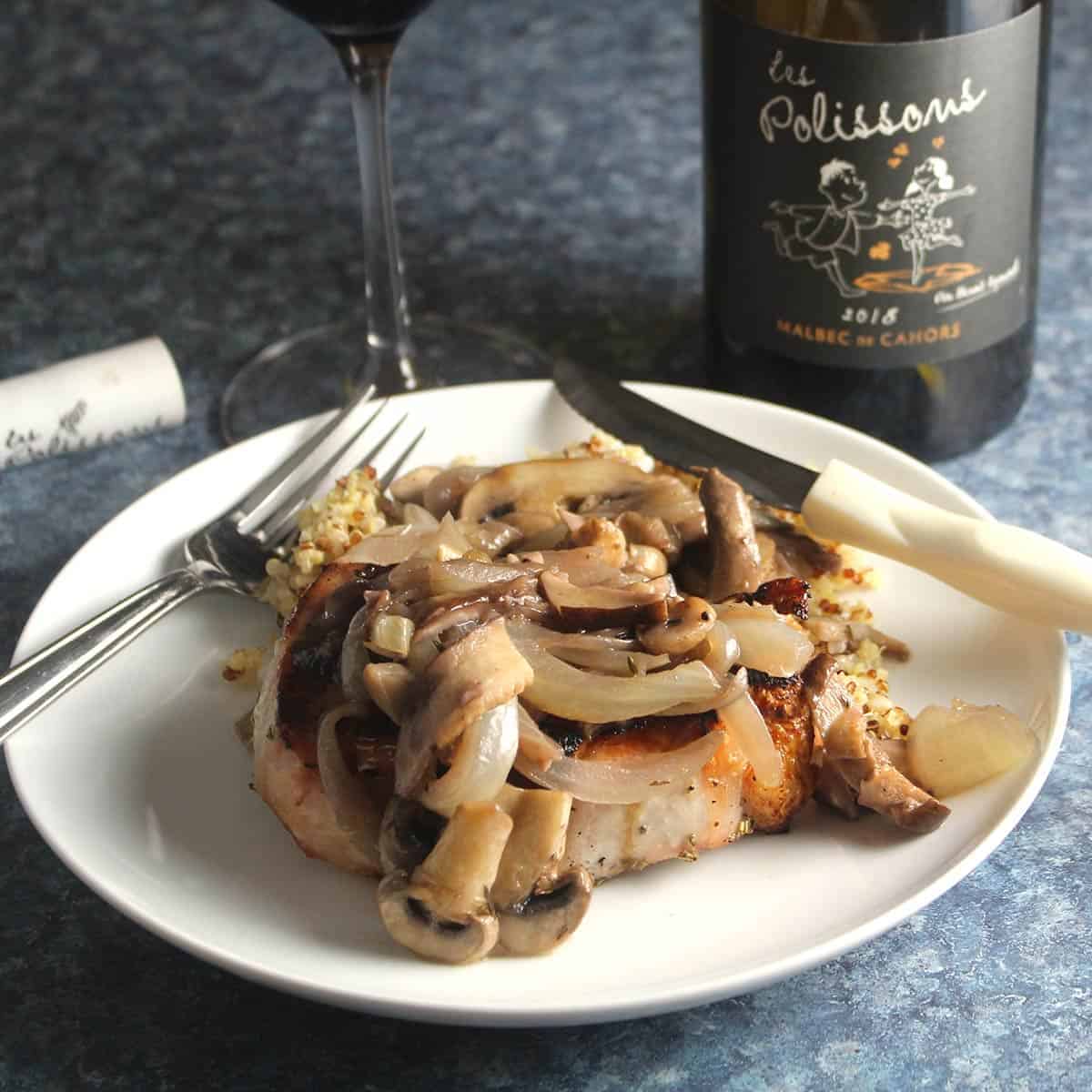 I’ll be providing more background about Cahors later this month; for now, I will jump in and talk about our pairing for the Garlic Mushroom Pork Chops. We had the 2018 Clos d’Audhuy Les Polissons (under $20, 13.5% ABV), made from 100% Malbec, organically produced.

We are off to a good start with this mushroom pork chops paired with Cahors Malbec! Visit our Mushroom Truffle Risotto with Cahors Malbec article for another delicious pairing along with more details about the Cahors region, including links to some great articles from our French Winophiles friends. 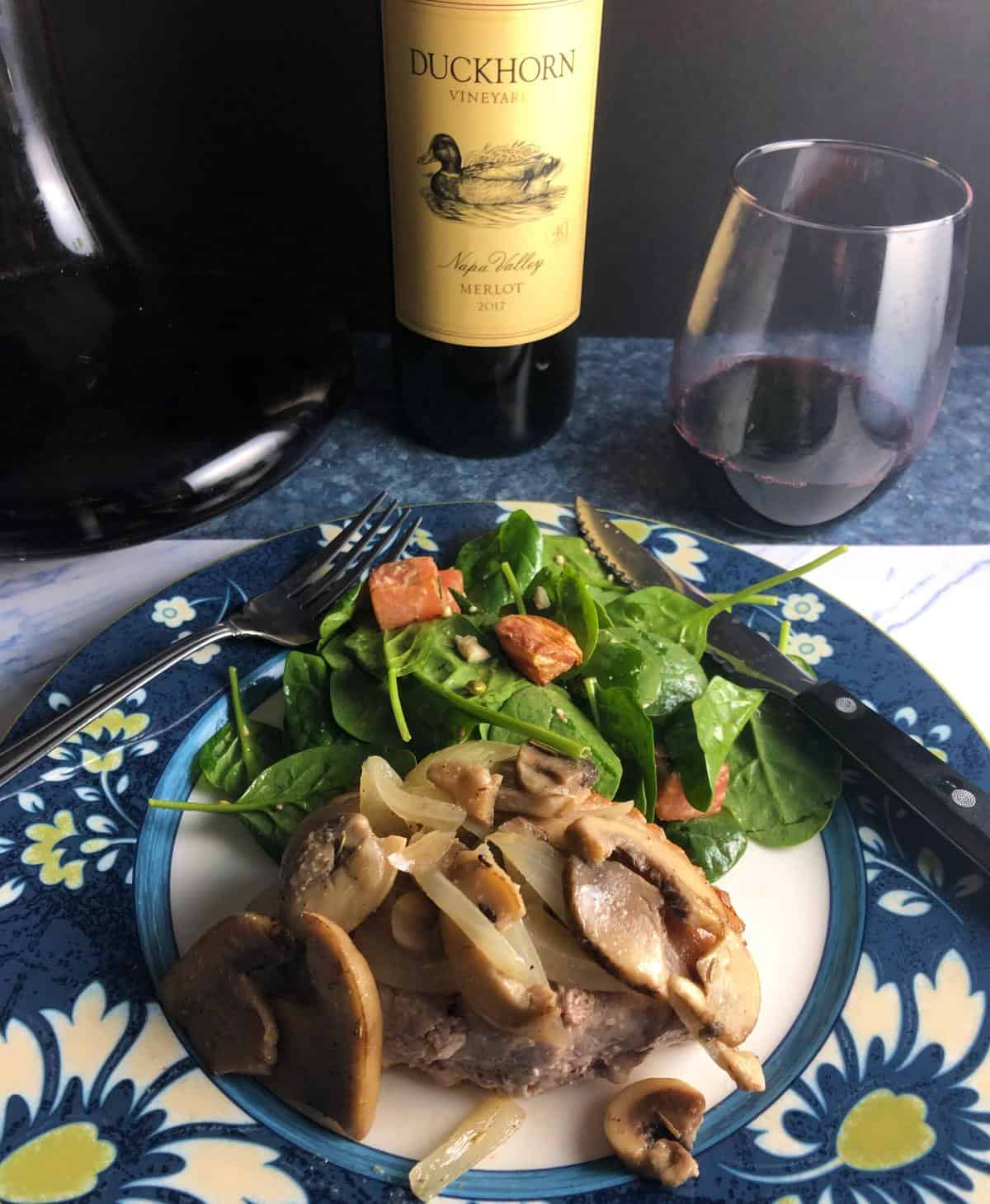 We recently re-made the garlic mushroom pork chops minus the quinoa. We opened a bottle of the 2017 Napa Valley Merlot ($56, 14.5% ABV) from Duckhorn. Always one of our favorite sources for Merlot, this was another good pairing for the hearty mushroom and pork combo.
For more ideas for Merlot combos, see our Merlot Food Pairing article. 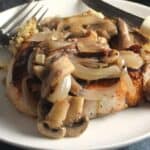 Grilled pork chops smothered with a garlic mushroom sauce, served with some hearty quinoa for a satisfying meal.

For the pork rub

For the garlic mushroom sauce 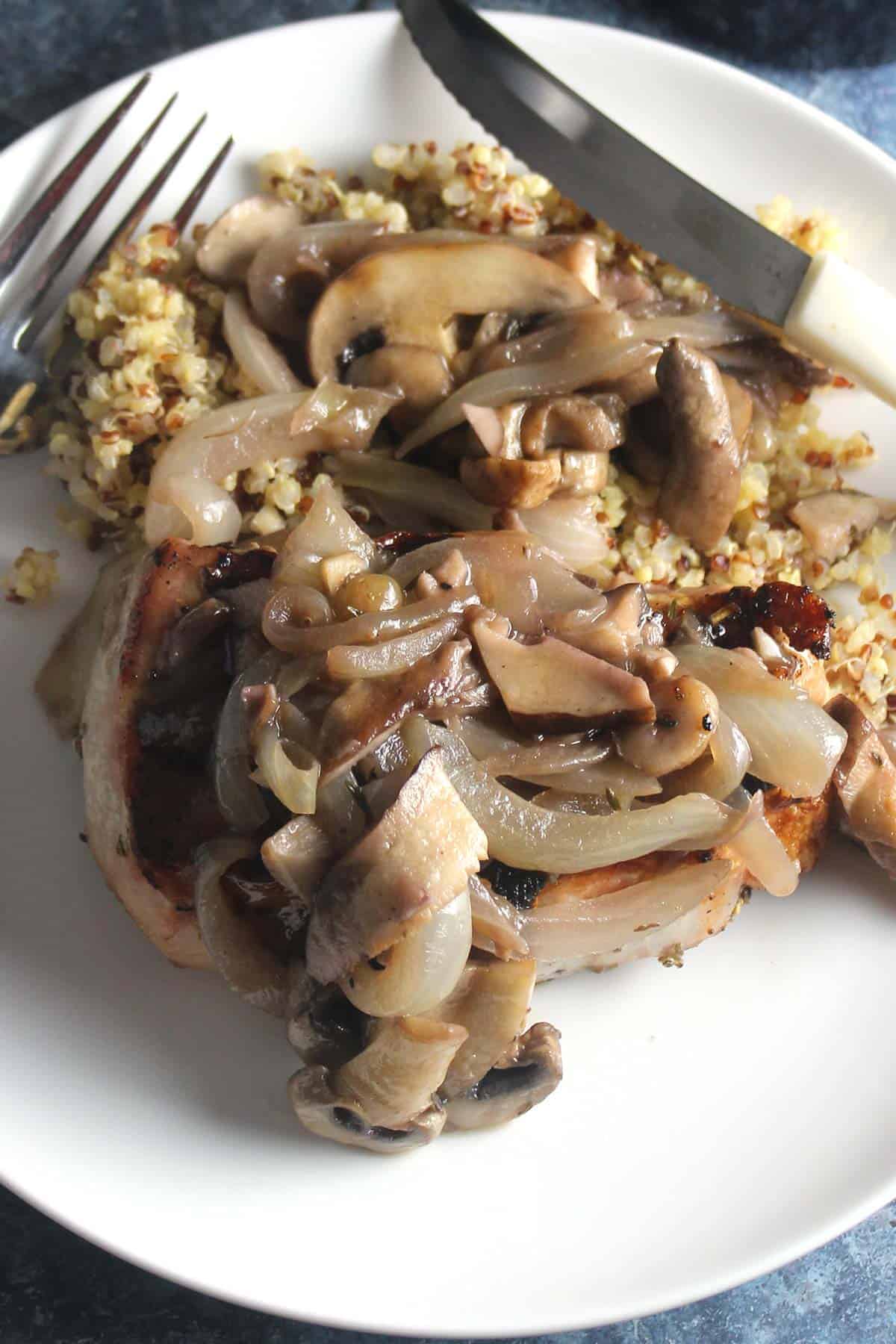